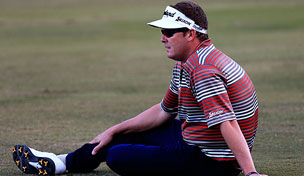 LAKE BUENA VISTA, Fla. – Charlie Beljan was worried about keeping his PGA Tour card when he showed up at Disney for the final tournament of the year. That changed Friday over five frightening hours when he felt a shortness of breath and his heart racing, and eventually told his caddie that he thought he was going to die.

His chest heaved. He called for paramedics at the turn and was told his blood pressure was not good. He sat in the middle of the fairway to rest and kneeled on the green to try to steady himself.

In one of the most remarkable rounds of the year, the 28-year-old rookie fought through it for an 8-under 64 to take a three-shot lead.

Moments after signing his card, Beljan was loaded onto a stretcher. His eyes were closed, his head tilted back – still wearing his visor – and his arms were folded across his stomach as paramedics loaded him into an ambulance parked beyond the 18th green at the Palm Course.

''I think he was scared,'' said his caddie, Rick Adcox. ''He kept saying he thought he was going to die. He just had that feeling. I don't know why. But it was spooky.''

A few hours later, his agent sent a text to PGA Tour officials from Celebration Hospital that Beljan was waiting on tests, feeling better and hopeful of being discharged from the hospital Friday evening, though that was not certain.

Beljan was in the lead for the first time after any round going into the weekend at the Children's Miracle Network Hospitals Classic. It could not have come at a better time because he is No. 139 on the money list, and only the top 125 keep their full cards for next year.

And yet the surreal day ended with Beljan not even sure he would be able to play on the weekend.

The Tour said Beljan complained of an elevated heart rate, shortness of breath and heart palpitations. Adcox said Beljan told him of numbness in his arms and he felt like he was going to faint.

''I thought they were going to stop him on 10 when they told him what the blood pressure was,'' he said. ''He just said, 'I'm going to keep going until either I pass out or they take me off.' I kept saying, 'It doesn't matter to me. It's only a golf tournament. You've got many more.'''

The struggle was painfully clear the way Beljan constantly stooped over with his hands on his knees, backed off shots and tried to take deep breaths. That he wound up in the lead at 12-under 132 was simply amazing.

Beljan had a three-shot lead over seven players, including Henrik Stenson, Harris English, Charles Howell III and first-round leader Charlie Wi. He likely would need to finish in about 10th place to move into the top 125 and keep a job for next year – assuming he can even play.

Golf didn't seem to be a big priority across from the Magic Kingdom, and there were concerns Beljan would even finish his round.

''I thought a lot of times he was going to stop,'' Adcox said. ''I didn't even think he was going to start. He asked me to go find a doctor at the beginning, and I did. The paramedics ... were on No. 10 waiting on him. Blood pressure wasn't good then. For him to go on, that was pretty much his decision.

When he did get over a shot, the outcome generally was superb.

Adcox realized something wasn't right when Beljan called for a doctor on the practice range. He drilled his long second shot onto the green at the par-5 first hole, and when the caddie handed him a putter, he said Beljan told him, ''I don't feel very good.''

''He got up there and made the eagle and still said he didn't feel good,'' Adcox said. ''It's been not good all day. The score was good.''

The caddie said they didn't pay attention to the score Beljan was putting together, and because they were playing on the Palm Course that doesn't have many leaderboards, they didn't even know Beljan was in the lead until the round was over.

They simply started a countdown – one more hole, one more shot.

Beljan had two eagles and played the par 5s in 6 under. He struggled to finish, picking up a bogey on the 17th and missing the green to the right on the 18th. Facing a difficult chip, made even tougher that he looked wobbly over the ball, he hit a beautiful shot to 4 feet to save par.

The final two rounds move to the tougher Magnolia Course, which effectively feels like the final stage of Q-school for some of the players. Matt Jones and Mark Anderson, in that group at 9-under 135, can avoid going to the second stage of Q-school. Wi needs a win to have any hope of getting into The Masters. English is going for his first win.

Kevin Chappell was at No. 123, but he put together another solid round and suddenly is only four shots out of the lead. His card would appear to be safe. 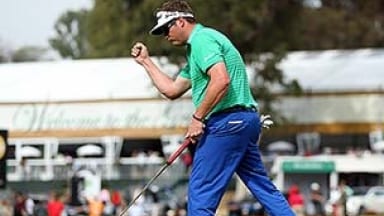 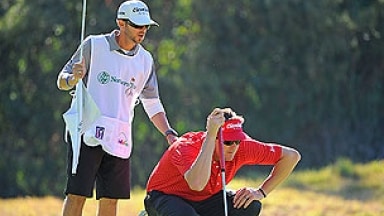