Big names on the sidelines for opening Tour event 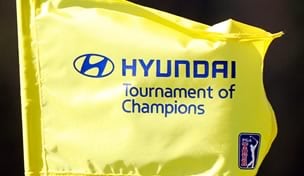 Getty Images
PONTE VEDRA BEACH, FL - MAY 06: Sergio Garcia of Spain laughs on the practice ground during a practice round prior to the start of THE PLAYERS Championship on THE PLAYERS Stadium Course at TPC Sawgrass on May 6, 2009 in Ponte Vedra Beach, Florida. (Photo by Scott Halleran/Getty Images)  -

KAPALUA, Hawaii – The list of who’s not at the season-opening Tournament of Champions reads more like a “Who’s Who.”

Missing are three of the four major champions – Charl Schwartzel, Darren Clarke and Rory McIlroy, who at 22 already is on the very short list of golfers capable of moving the needle no matter where they play.

If that’s not enough, three of the four World Golf Championship winners from last year are not at Kapalua, either.

Luke Donald, the No. 1 player in the world, recently returned home from a year-end journey that took him from South Africa to Dubai to Australia. Adam Scott was home in Australia watching his girlfriend, Ana Ivanovic, win her opening match in the Brisbane International as she gets ready for first Grand Slam of the year. Martin Kaymer of Germany is gearing up for his title defense in Abu Dhabi.

A 28-man field of PGA Tour winners, tying the record for the smallest field to start the PGA Tour season on the shores of Maui.

With apologies to PGA champion Keegan Bradley, WGC winner Nick Watney and FedEx Cup champion Bill Haas, the biggest stars at Kapalua might be found in the broadcast booth. Johnny Miller and Nick Faldo have agreed to be co-analysts for the first time.

A year ago, the winners-only field at Kapalua had 19 of the top 40 in the world. Now there are 19 of the top 100. The only two players from the top 10 are Steve Stricker and Webb Simpson.

The PGA Tour no longer starts with trumpets blaring. It’s more like a solo on the ukulele.

Then again, this is nothing new.

Phil Mickelson caused a ripple when he stopped coming to Kapalua in 2002. Tiger Woods caused more of a tidal wave when he decided not to play in 2006, and he hasn’t been back since (although he hasn’t been eligible the last two years).

The Tour has toyed with the idea of expanding the field, either by inviting all past winners at Kapalua (Ernie Els, Sergio Garcia, Jim Furyk and Geoff Ogilvy) or by offering a two-year exemption to the Tournament of Champions for PGA Tour winners.

That wouldn’t solve the problem. Some would argue that golf has too many exclusive, limited-field tournaments already. This one is worth keeping because there’s only one way to stand on the first tee with such splendid, sweeping views of the Pacific Ocean. Winning should still mean something.

It would be easy to suggest these guys are spoiled. How hard is it to fly to a tropical paradise at the start of the year, be treated to a free room at a Ritz-Carlton that hugs the Maui coastline, play in a small field with no cut for a $5.6 million purse and play a course carved out of a mountain that is different from anything they play all year?

But there’s more to it than that.

Of the 11 players who aren’t at Kapalua, most have a valid reason. Brandt Snedeker, Fredrik Jacobson and Dustin Johnson are recovering from injuries. Kaymer and Clarke aren’t even PGA Tour members, and might want to save their starts for later in the year, perhaps closer to the majors or when they can put a couple of tournaments together.

And with winners coming from all over the world, respect must be shown to the worldwide game. Padraig Harrington never played in the Tournament of Champions because this is when he traditionally takes his break from a long season. That’s the case for McIlroy and Donald. Schwartzel has tournaments in his native South Africa this month.

Graeme McDowell had a blast at Kapalua last year, especially when he shot 62 on the last day and finished third. Coming off a frenetic finish to his 2010 season that took him across oceans, however, he realizes now that he would have been better served taking an entire month off instead of going from Northern Ireland to Hawaii to the Middle East. He never quite recovered.

One culprit for the Tournament of Champions lacking some punch might be the FedEx Cup.

When the concept was pitched to the players in 2005, one of the selling points was that the regular season would end at the Tour Championship in late September, giving players three months off if they wanted.

“That selling point is not there anymore,” Furyk said.

The PGA Tour now is pushing a plan to start the new season with the Fall Series, which might tempt some players to keep going. But that’s only a small part of this big picture. Players still can choose to play whenever and wherever they want.

More than the FedEx Cup, the global nature of the game is shaping golf’s new landscape.

There is simply no getting around it. For international players, most of them PGA Tour members now, they are playing deep into the season on the European Tour.

The fourth World Golf Championship – and the only one outside the United States – is in early November in China. There are strong tournaments leading to the season finale in Dubai, and there are other tournaments that offer small fields and big purses in South Africa and California that are hard to ignore.

The PGA Tour remains the strongest in golf, which is not to say golf revolves around the PGA Tour.

Golf is unlike other sports, and it’s silly to try to pattern it after the other leagues.

This is not opening day. It’s not the Daytona 500.

These days, golf has different starting points to the season. The first tournament is for winners only at Kapalua. The first network TV event is at Torrey Pines. The first tournament with a super strong field is in Abu Dhabi. The first major is the Masters. All are respectively attractive to hard-core fans, casual fans and eventually the mainstream.