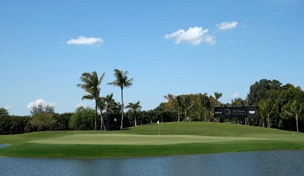 DORAL, Fla. – Steve Stricker usually doesn't show up at a tournament on Sunday. He made an exception for the Cadillac Championship, and it made perfect sense.

And not just because snow is in the forecast at home in Wisconsin.

This is the 20-year anniversary of the first time Stricker played the Blue Monster at Doral.

Now it seems as if he's on a blind date.

''You know you're at Doral, but it doesn't feel anything like it,'' Stricker said Tuesday. ''A few holes, they haven't changed. But then you step up there, and 80 percent of them look different from the tee.''

And that was before he saw the Trump helicopter in all its glory to the left of the 10th tee.

''Isn't that something?'' Stricker said. ''That was probably the first thing they built, that helipad.''

Donald Trump bought Doral and is putting a golden touch on the resort, which includes the Blue Monster (now officially known as Trump National Doral). He brought in Gil Hanse, the architect who is designing the Olympic golf course in Rio, for a makeover the likes of which the PGA Tour has never seen.

Some things haven't changed – the tropical warmth, and jetliners soaring over the golf course every minute as they descend on Miami International Airport. Trump didn't get the flight patterns changed. Not yet, anyway.

But with few exceptions, it's a brand new course.

Gonzalo Fernandez-Castano of Spain is in his first year on the PGA Tour. He only moved to Miami in December. He has played Doral four times, making this the one course he knows better than the other 68 players in the field, who are getting to know it for the first time.

The opening hole used to be one of the easiest par 5s on tour. A big tee shot in the fairway would leave a short iron into the green for the second shot. Making par felt like losing a shot to the field.

Stricker played a practice round with Jim Furyk, a past champion at Doral. Furyk hit a tee shot down the middle and had his head down as he walked toward the ball. Finally, he looked at his next shot – just under 260 yards to go, down and to the right with water wrapping around the right side of the green and bunkers dotting the landscape.

''You're going to be saying that a lot today,'' Stricker told him.

Whether the changes are for the better won't be known until Thursday when the scores count, and even then the opinions will vary. Odds are the player with a 68 might have a different answer from the guy who shot 75.

It's longer and stronger. Perhaps the biggest change on any section of the golf course is the 15th and 16th holes.

The par-3 15th is only about 150 yards, but water wraps around all but the far right side of the green. Jordan Spieth hit an 8-iron to the far back of the green. It landed about six paces from the back and wound up down the bank and into the water.

The short par-4 16th is a driver over the water, unless a player chooses to lay up with an iron to the right.

Spieth was stunned to learn the lake wasn't there before.

This is one time the 20-year-old Texan has an advantage. He knows the course about as well as anyone, which is not very well at all.

As for Tiger Woods?

He is a four-time champion at Doral. He often talks about putting from memory, which will do him little good on a course where the greens have been redone. The shape of some holes is entirely different. There are slopes on the greens that weren't there before.

Woods was not at Doral on Tuesday, and the tournament was still awaiting word on whether the lower back injury that led him to withdraw from the Honda Classic on Sunday will be healed enough to play. If he does, he'll get one practice round on the Blue Monster before he defends his title.

''It's going to be a bit of a shock to him, I think because it's just such a different look,'' Jason Day said.

Justin Rose, who won at Doral two years ago, would rather a course go through a massive overhaul than just a few tweaks.

This was an overhaul. Trees are gone. Others have been planted. There are bunkers where there had been grass (left of No. 3). There is water where there wasn't water.

''So you don't get the sense of being on the same golf course,'' Rose said. ''I think if they had just reworked the greens and everything else looked identical, that might mess with your instincts more. But I think you really just view this as a new golf course. I didn't bring my yardage book from the past number of years. So it's a clean sheet.''

The busiest guys all week have been the caddies.

Jimmy Johnson, who works for Stricker, went back to the course Monday evening after a practice round to study. He normally would have been out there by himself. But when he arrived at the par-5 eighth hole – a completely different look with carry-over water for the second shot – he found three other caddies and joined them in stepping off the yardage for the best place to lay up.