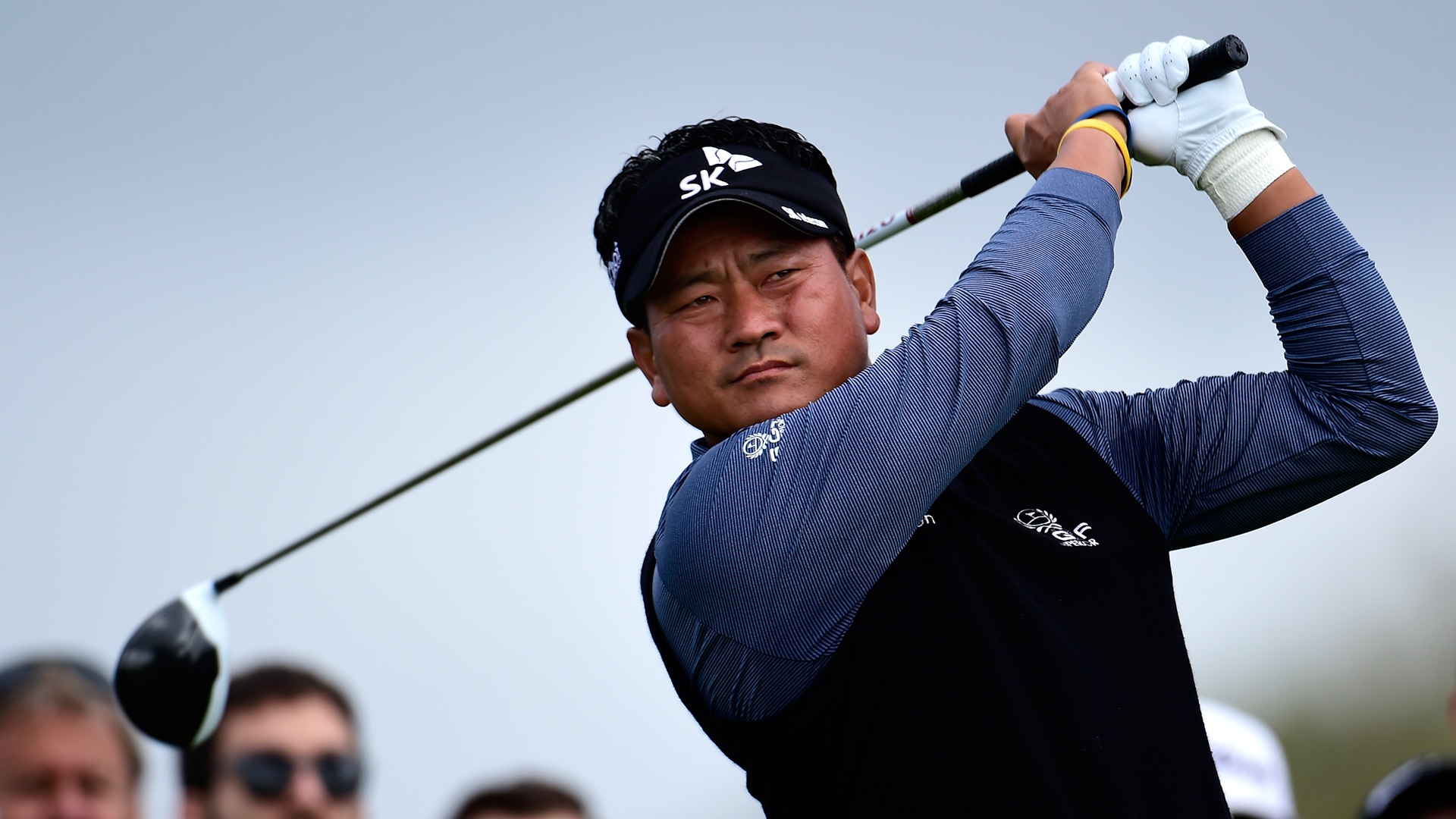 SAN DIEGO - Scott Brown and K.J. Choi, both of moderate length off the tee, are tied for the lead at the Farmers Insurance Open at Torrey Pines, where the South Course is the longest all year on the PGA Tour. It helps to hit it straight.

One shot behind was Jimmy Walker, who has plenty of power, but he hit only three fairways Saturday. It helps to make putts.

The mystery of this tournament adds another element for the final round with a nasty forecast. Bracing for increasingly heavy rain and gusts up to 40 mph, the PGA Tour moved up the tee times as early as possible to try to avoid the worst of it.

With 16 players separated by three shots, this could be anybody's tournament.

''I enjoy the grind of it. And I like tough golf courses,'' Brown said. ''And I think we're going to have both tomorrow.''

Choi one-putted his last six holes to salvage an even-par 72 and a share of the lead with Brown, who missed three good birdie opportunities late in his round of 70.

One shot behind were Walker and Gary Woodland, who shared the 36-hole lead with Choi and didn't see anything go in until late in his round. Woodland made two birdies over the last four holes for a 73.

Choi was headed the wrong direction until he made a pair of birdies, saved par on three straight holes and then hit wedge to 3 feet on the par-5 18th for one last birdie.

''The last birdie will help, because tomorrow it's going to be tough,'' Choi said. ''So it was a very good round today.''

Phil Mickelson and Rickie Fowler each missed the cut, though Torrey Pines still has a local favorite to cheer. That would be Michael Kim, the Cal grad who went to Torrey Pines High School and grew up watching Mickelson and Tiger Woods win here. Kim had a 70 and was among four players at 7-under 209.

Another shot back was a group that included Dustin Johnson, who didn't make a birdie until the 13th hole and still managed to limit the damage to a 74.

Choi hasn't won since The Players Championship in 2011, which gave him a five-year exemption that ends this year. He was an assistant captain in the Presidents Cup in October, and showed he still has plenty of game. Giving 30 yards off the tee to Johnson and Woodland, he rarely was out of play and dropped shots mainly on a three-putt bogey at No. 5 and a poor chip across the green at No. 7 that led to double bogey.

But he got back into the mix with his strong finish, particularly the par saves on the 15th and 16th holes.

Brown appeared to be the most relaxed, maybe because of his home life. His wife, Allison, gave birth to their second daughter a week ago Tuesday. Brown said that might have put him at ease this week, and he recorded back-to-back top 10s on the PGA Tour for the first time in 2012 right after their first daughter was born.

But he did not dismiss the work he put in over the offseason with swing coach John Tillery, or even the inspiration from good friend and Aiken, South Carolina, neighbor Kevin Kisner, who has been among the best players on Tour over the last year and who routinely beats him in games at Palmetto Golf Club.

Walker already has two victories on California courses - Pebble Beach and CordeValle - and loves Torrey Pines. He just wishes he were hitting the ball where he was aiming.

''It hasn't been real fun,'' Walker said. ''But you got to deal with what you brought with you, so I'm doing the best I can. Just a lot of up-and-downs today. A lot of putts. So all that feels good. So that's a good thing.''

Even with the lead groups struggling with the South Course, there were plenty of fireworks.

Jason Gore had an albatross when he holed out with a 3-wood on the par-5 18th hole. Ben Crane was stuck behind a tree and punched it out on the 15th, only to watch it bound onto the green and into the cup for an eagle. A short time later, Freddie Jacobson holed out for eagle on the 15th.

Based on the forecast, the final round might be more about surviving with pars.