D. Johnson leads at Riviera; Walker one back 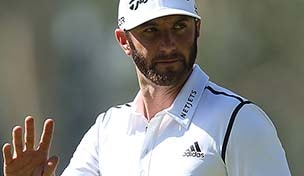 LOS ANGELES – Dustin Johnson moved down the coast of California and brought his game with him Thursday in the Northern Trust Open.

So did Jimmy Walker.

Johnson made six birdies on a warm, sunny day at Riviera for a 5-under 66, giving him a one-shot lead when the opening round was suspended by darkness. Walker birdied his last three holes and was in the large group at 67 that included Francesco Molinari of Italy and Torrey Pines winner Scott Stallings.

The only comparison was the quality of his golf.

''It was cold, windy and wet at Pebble on Sunday. Here, it's not a lot of wind and perfect conditions. It's sunny and a really nice temperatures,'' Johnson said. ''It's still golf, though. You've still got to adjust no matter what you're doing.''

That was no trouble for Walker, whose victory in the AT&T Pebble Beach National Pro-Am was his third of the season. He drove his RV down from the Monterey Peninsula, got up at 4:30 a.m. Wednesday to appear on Golf Channel, and then went right back to work.

Walker was in the middle of the pack until his tee shot on the par-3 16th settled just over a foot from the cup. He nearly reached the par-5 17th in two to set up a simple birdie, then finished with one of his best shots - an 8-iron from 184 yards out of a flyer lie in the rough to the back of the green and a 30-foot putt.

''It's four more days of golf,'' Walker said. ''You can ride the momentum of really good play. But everyone started at even and you just have to be like, 'Let's go get it again.'''

It was a glorious day off Sunset Boulevard, and Riviera was in ideal shape - firm and fast, particularly on the greens.

The warmth meant a little more distance, such as the 349-yard tee shot Johnson hammered down the middle of 13th fairway, a slight dogleg left framed by eucalyptus trees. That left him only 97 yards, and he stuffed it. And on the par-5 17th - 608 yards up the hill, no help from wind - he reached it in two and had a two-putt from just over 20 feet. His only glitch was coming up just short of the green and in the bunker on the 225-yard fourth.

Johnson isn't playing a lot this season, but when he does, he plays well.

He already has a win at the HSBC Champions in Shanghai. He shared the 54-hole lead at Kapalua and tied for sixth, and then took off four weeks before returning at Pebble Beach. That was a good sign for Johnson, who said he doesn't have a good history of playing well in the first event after a long break.

''This time, I stayed with it. I worked hard at home,'' Johnson said. ''It was tough at Pebble because of the weather, and it was hard to keep your concentration.''

Life is bliss right now for Walker, who is going for his third win in California this season, starting with the Frys.com Open at CordeValle in October. The only struggle was a bogey on the par-5 11th when his tee shot just missed the fairway and buried in a small indentation in the long grass. He followed that with another bogey on the tough 12th, and then rallied at the end.

Jim Furyk, Keegan Bradley and Rickie Fowler were among those at 68.

Jordan Spieth looked as though he might be among the leaders after holing out from 125 yards for eagle on No. 7 to reach 3 under. He was in position for a birdie on the 11th until leaving a shot in the greenside bunker and missing the par putt. Spieth caught a huge break on the next hole when his tee shot was hooking out-of-bounds until hitting a tree, though he had to scramble for bogey.

He also made three par putts in the 5-foot range to hold it together, but dropped a shot on the 18th when he tried to punch a hybrid around some Eucalyptus trees. He had a 73.

Spieth was playing with Fred Couples - the 20-year-old Texan was born a year after Couples won the Masters - and the old guy held his own. Couples had a lost ball on his second shot at No. 11 and made double bogey, rallied with two birdies and then made bogey on the final hole for a 72. Couples is playing the Northern Trust Open for the 32nd time.

DIVOTS: The 10th hole was perilous as ever at 314 yards, especially for Scott Verplank. He took two shots from the front bunker and three from the back on his way to an 8. ''That was fun,'' Verplank said. The rest of the day wasn't. The 49-year-old Verplank, who has been battling injuries the last few years, withdrew with a bad back. ... Billy Hurley missed last week at Pebble Beach because his wife, Heather, gave birth to their first daughter (and third child), Madison Joy. Then, he got in as an alternate when Harrison Frazar withdrew. Hurley opened with a 70.