Daly returns from surgery to contend at BMW Masters 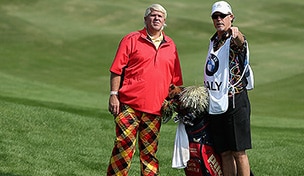 SHANGHAI – John Daly spent three months putting ice on his elbow and chocolate milk in his belly, and he returned Thursday feeling better than he has in years.

Playing for the first time since surgery to repair the tendon in his right elbow, Daly played bogey-free in strong wind and opened with a 4-under 68 in the BMW Masters to trail Luke Guthrie by three shots.

Daly withdrew after three holes of the second round at The Greenbrier Classic on July 5 and had surgery a week later. He figured he would be out for at least four months, but returned a few weeks earlier than his doctor expected.

''I've always been a quick healer. I don't know why,'' Daly said. ''He figured four months. I did everything he told me to do. I usually don't listen to anybody.''

Daly received a sponsor's exemption into the BMW Masters, in part because of a relationship formed when he won the BMW International Open in Germany in 2001. The wind blew about 30 mph across many of the holes at Lake Malaren. It was a good test for Daly, because he needed to hit several three-quarter shots to keep the ball flight down in the wind. That's the shot that had been giving him trouble.

He kept bogeys off this card, picked up a pair of birdies on the par 5s and his late one on the par-3 17th. Daly caught a break on the 18th when someone stepped on his ball in the rough, allowing for a drop. He came up just short of the green, and his 50-foot chip stopped one turn away from falling.

Daly would have settled for anything around par on this blustery day in Shanghai. He said he could play well Friday and shoot 80 in this kind of wind.

The 68 exceeded his expectations. More than a number, he was pleased with how he controlled his distance.

''What's been a blessing is to be able to pinch golf shots,'' he said. ''Full shots are easier than three-quarter shots, because you have to hit it harder. I haven't had a right hand in golf for probably six years. It feels good just having two arms to swing again. I feel like I can control the golf ball. That three-quarter shot is my bread-and-butter. You've got to have it on a day like this, and I executed it.''

Daly rolled up the sleeve of his wind vest to reveal a scar on the right elbow. He said doctors inserted two screws and wrapped tendons both ways, and he never flinched or felt any pain on any of his shots.

He returned looking a bit heavier than in the summer, and part of that was by design. He felt he needed to add some weight to regain strength, and it was an easy fix.

''I drank a ton of Vitamin D milk,'' Daly said. ''My mom always told me the old remedy was to drink a lot of milk. But I put a lot of chocolate syrup in mine.''

Otherwise, he still looked like the Daly of old.

He chose a checkered pattern of red, yellow and black for his trousers, and considering Munich-based BMW as the title sponsor, someone remarked that he wore German colors. Daly was not aware of this.

''No disrespect to the Germans,'' he said, ''but we call it ketchup and mustard.''