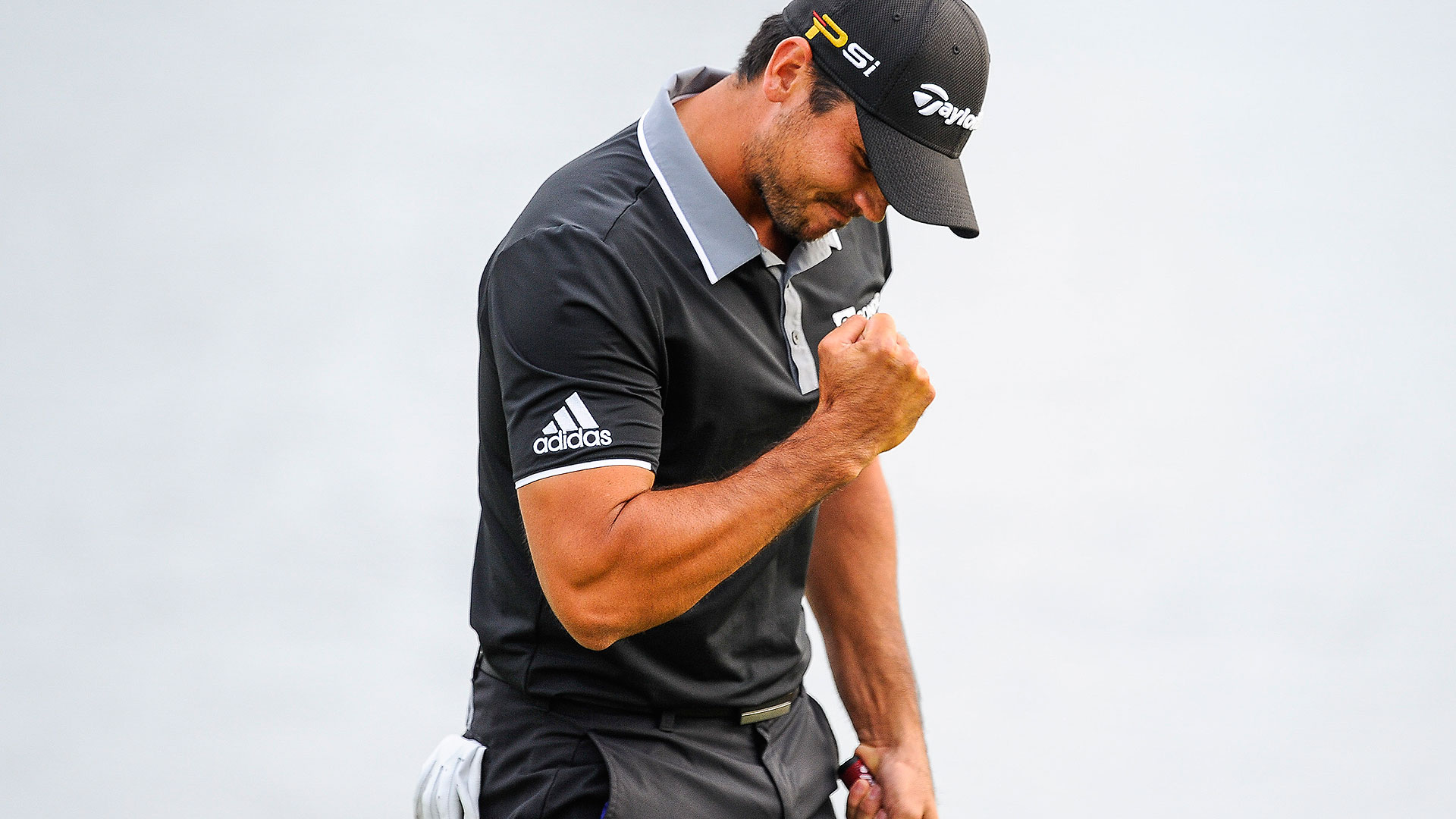 ORLANDO, Fla. - Arnold Palmer was watching him. Tiger Woods was texting him.

Jason Day, his ball in a bunker on the 18th hole, was only thinking about how to navigate nearly 100 feet in two shots to get the par he needed to win the Arnold Palmer Invitational on Sunday.

Out of sorts with his swing all afternoon, Day delivered his best at the end.

The bunker shot came out just as he pictured, and Day made the 4-foot par putt to close with a 2-under 70 and outlast Kevin Chappell for his first win of the year.

''I was able to walk up there and have a special moment with the King,'' Day said. ''That's something I always wanted to do.''

He never imagined having to work this hard.

There was a four-man sprint over the final two hours at Bay Hill, and it was all about who made the fewest mistakes. Day got his out of the way early. He lost a two-shot lead on the front nine, recovered with a 9-iron out of the rough and over a bunker to a foot on the ninth hole for birdie, and then produced two clutch shots at the end.

Day was one shot behind Chappell, who was in trouble on the 18th hole, when he hit 5-iron to 12 feet on the par-3 17th and made birdie. Chappell made his lone bogey of the back nine on the final hole and shot 69, and then could only wait to see if Day could beat him.

''I had a chance to win, and that's all I can ask for,'' Chappell said after his fourth runner-up finish on the PGA Tour, and second this season.

From a reasonable lie in the right rough on the 18th, Day took the water out of play and went into the front left bunker. With water behind him, Day blasted the ball far enough to let it roll out to just 4 feet behind the hole.

Day, who finished at 17-under 271, became the first wire-to-wire winner (no ties) at Bay Hill since Fred Couples in 1992. His eighth career PGA Tour victory moved him to No. 2 in the world and gave him a chance to overtake Jordan Spieth next week at the Dell Match Play.

And with the Masters looming, Day joins a long list of players who are on their games. Adam Scott won the first two events in Florida. Charl Schwartzel won last week. Day's victory meant for the first time since 1993 the Florida swing was won by major champions.

Day was most satisfied by winning without his best stuff. He said he never felt comfortable over any shot, and it showed in his face as he looked on with uncertainty at so many shots. He was patient enough to wait for his chance, and he seized it with the 5-iron on No. 17 and the bunker shot on the 18th.

''It's one of those tournaments that the biggest guys usually win,'' Day said.

One of those big guys was Woods, an eight-time winner at Bay Hill and now somewhat of a mentor to Day. He said they talk occasionally and text frequently, and he received a text from Woods on Sunday morning with a typical message: ''Just be yourself and stay in your world.''

It was a heartache for Chappell, dealing with a sinus ailment he picked up from his young son that drained his energy. Chappell took the lead for the last time at 17 under with a two-putt birdie on the par-5 16th, followed by a par save from a tough shot in the bunker on No. 17. His tee shot on the 18th went right and buried into deep grass, leaving him no option but to lay up.

Chappell hit wedge to 25 feet and before he took hit the par putt, he heard the cheer behind him as Day made his birdie.

''Being honest, kind of had me rattled a little bit,'' Chappell said.

He left his par putt well short and made bogey, signed his card and watched a TV monitor for Day's bunker shot.

''It's obviously those things - one of many - why he's been the No. 1 player in the world, and why I'm the 150th player in the world,'' Chappell said. ''You just can't bogey the last when you're in contention, and hats off to Jason. He played well, real clutch down the stretch. And I'll learn from this and get better.''

Troy Merritt, playing in the final group with Day, was seemingly out of the picture until he started the back nine with five straight birdies, the last one by holing out a bunker shot from 40 feet. Merritt wasn't done. He chipped in for par from behind the 17th green to stay one shot behind Day. His approach went into the water on the 18th, and he made double bogey for a 71 to tie for third with Henrik Stenson.

Stenson was the first to fall back by failing to save par on the 14th and hitting 4-iron into the water on the par-5 16th for another bogey. He shot 71.

All of them had at least a share of the lead on the back nine.