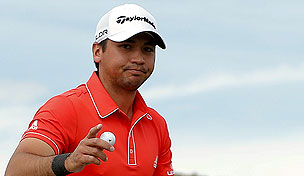 MARANA, Ariz. – Jason Day never stopped believing he would win the Match Play Championship, even in the midst of so many shots by Victor Dubuisson that simply defied belief.

With his ball at the base of a cactus, Dubuisson took an all-or-nothing swing though the sharp needles and a TV cable and incredibly hit it to 4 feet to save par. Seemingly out of it on the next playoff hole, the 23-year-old Frenchman somehow whacked a wedge through a desert bush and rocks and onto the green for another par.

Day finally ended the madness Sunday on the 23rd hole with a pitch to 4 feet on No. 15 for birdie.

It was the first time the championship match went overtime since the inaugural year in 1999 at La Costa, when Jeff Maggert chipped on the second extra hole of a 36-hole final. That was like watching paint dry compared to the show Dubuisson put on.

Day, with his first World Golf Championship, walked away with his second PGA Tour title that will take the Australian to No. 4 in the world.

This tournament might better be remembered for Dubuisson's magical escapes.

Even the great Seve Ballesteros would have saluted this performance.

Two holes down with two holes to play, Dubuisson rapped in a 15-foot birdie putt on the 17th hole and then took advantage of a rare lapse by Day, who bogeyed the 18th hole with a three-putt from 50 feet on the upper tier. The Frenchman saved par from the bunker to force extra holes.

From the first fairway, Dubuisson went so far long that bounced hard off the back of the green and into the desert, the ball nestled at the base of a cholla. During regulation, he would have taken a penalty drop. In this case, he felt he had no choice. He stepped up to the ball and, with nothing to lose, swung away. The club got caught on a TV cable, and the ball scooted up the slope of 3-inch grass and onto the green.

It was reminiscent of the shot Bill Haas pulled off at East Lake from shallow water on the 17th hole. This was better.

And it came with an encore.

On the next extra hole, the par-5 ninth, Dubuisson tugged his shot left of the green, left of the bleachers and into a desert bush surrounded by rocks. He took another crack at it, and the shot came out perfectly through thick grass and onto the green.

Day could only laugh, though he had every reason to believe this was not his day.

After matching bogeys and pars on the next two holes - this time from the green grass - the match ended on the 333-yard 15th hole when Dubuisson's drive strayed too far right into side of a hill, leaving him an awkward pitch.

''I'm disappointed because I made some terrible shots,'' Dubuisson said, ignoring the two that were as close to a miracle as golf allows.

Day won $1.53 million. Lost in all the theater was that he never trailed over the final 53 holes of this fickle tournament.

Dubuisson earned $906,000, all but assuring a PGA Tour card for next year. And he all but clinched a spot on the Ryder Cup team in September, moving to the top of the points table by the equivalent of about $1.5 million.

In the morning semifinals, Day beat Rickie Fowler 3 and 2, and Dubuisson topped Ernie Els 1 up. Fowler beat Els in 19 holes in the third-place match.