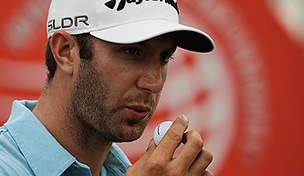 Getty Images
SOUTHAMPTON, BERMUDA - OCTOBER 14: Win McMurry from Golf Channel in action during the pro-am event prior to the PGA Grand Slam of golf at Port Royal Golf Course on October 14, 2013 in Southampton, Bermuda. (Photo by Ross Kinnaird/Getty Images)  -

SHANGHAI – For 16 holes, Dustin Johnson looked like the player who has won every year since turning pro and has played on two Ryder Cup teams. Starting the third round of the HSBC Champions with a five-shot lead, he blasted his way to 10 birdies and was running away from the field.

As for the other two holes, it was a reminder that no lead is safe in his hands.

All those birdies were offset by two double bogeys, the last one cutting his lead in half going into the final round of this World Golf Championship. About the only thing that cheered him up Saturday afternoon was a 6-under 66 for a three-shot lead over Ian Poulter.

''It's a good score,'' Johnson said. ''I'm definitely happy with what I shot. I'm just not happy with the way I finished. Making two doubles, there's no excuse for that, especially the way I'm playing right now.''

Johnson ran off five straight birdies to close out a 30 on the front nine of Sheshan International and a five-shot lead over Poulter. For his next trick, the 29-year-old American hit wedge four times from inside 100 yards before he could get the ball on the green at the 10th hole. He had to make a 12-foot putt for double bogey.

He followed with another run of four straight birdies, hitting a 5-iron into 15 feet for a two-putt birdie on the par-5 14th, and a 3-iron to the front of the 16th green for a chip-and-putt birdie that stretched his lead to six shots.

Everything changed in the final half-hour of a soft, gentle day for scoring in Shanghai.

Poulter, who shot 30 on the front nine without making birdie on either of the par 5s, closed with a birdie on the par-5 18th for a 63. He thought that was a good day of work, even though he wasn't making up any ground on Johnson.

''This golf course gives up a lot of birdies, and he's a good player,'' Poulter said. ''And in this form, he's going to make a lot of birdies. I just need to do my thing tomorrow and make a lot more than what he does. I'm going to have to see what happens coming down the stretch.''

Poulter was talking about Sunday afternoon. He didn't realize he would be getting some help on Saturday.

Johnson's tee shot sailed to the right and into the middle of the lake on the 18th. It appeared that he could have dropped further up the fairway, but playing partners Boo Weekley and Bubba Watson didn't offer much help as to where (or if) the shot ever crossed land before it entered the hazard. Not wanting to take any chance, Johnson opted to return to the tee. He ripped another drive down the edge of the water, this time with his draw to reach the fairway.

But his approach went left near the lip of a bunker, and he did well to blast out to 15 feet and take two putts for his 7.

Johnson was at 18-under 198 and will be in the final group with Poulter and Graeme McDowell, who had a 64 and was four shots behind.

Rory McIlroy birdied three of his last five holes for a 67 and was six shots behind, along with Graham DeLaet and U.S. Open champion Justin Rose, who each had a 65.

They still had an outside chance, though so much of that depends on Johnson and how to he responds to his pair of double bogeys.

''I'm still a little mad from my double bogey on 18,'' Johnson said. ''Obviously, to have a three-shot lead going into the last day is good and I'm looking forward to the challenge. I still have to play really well. The guys that are right behind me, they're playing very well, too. So it's still going to be a tough day tomorrow. Got to come out and make a lot of birdies.''

That wasn't the problem – for Johnson and most everyone else.

Martin Kaymer, who won the HSBC Champions two years ago by tying the course record with a 63 in the final round, went one better. The German started with six birdies in seven holes and thought briefly about a 59 with three straight birdies on the front nine that put him at 10-under with three to play. He missed an 8-foot birdie on No. 7, failed to birdie the par-5 eighth and had to settle for a course-record 62.

Kaymer was eight shots behind.

McDowell was six shots out of the lead when he finished and it looked as though he might lose ground to Johnson. Even so, McDowell has a lot at stake on Sunday at No. 2 on the European Tour money list, and he could move past Henrik Stenson in the Race to Dubai if he were to finish alone in second.

''From here, it looks like Dustin is going to have to beat himself for anybody to have a chance to catch him,'' McDowell said. ''Race to Dubai points will be very important to me. I have a lot to play for tomorrow. If not the trophy, second place will certainly be worth my while.''

And then, the trophy became a little more realistic.

''I have to do my thing tomorrow,'' Poulter said. ''It's only Saturday. You can't win tournaments on Saturday. It's all about playing well on Sunday.''