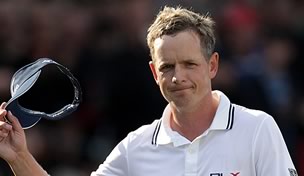 This is more than a case of semantics, though.

To be eligible for the money title, a player must be a member of each tour. Membership requires a minimum number of starts. And that requires some juggling of tournaments and a fair amount of travel.

“It’s not easy to be a member of both tours and do what I’ve done,” Donald said Tuesday. “There’s only really a handful of people that do it, so obviously there’s a limited number of people that can do it in any one year. To be the first is very special, and I think it’s probably my greatest achievement this year.”

Woods also had seven events (majors and WGCs) count toward being the “leading money winner.” The closest he came to the minimum events required for membership in Europe – when the minimum used to be 11 tournaments – was in 2006. He played 10 times. Then again, he would have had to apply for membership, and that apparently never interested him.