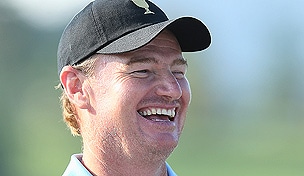 DUBLIN, Ohio – Ernie Els remembers them as being a big part of his junior golf foundation in South Africa.

He referred to Louis Oosthuizen and Charl Schwartzel as leaders on his junior team that traveled the country, with strong voices and a game to back it up. Oosthuizen went on to win a British Open at St. Andrews, and Schwartzel won the Masters.

Branden Grace was another youngster who came through his foundation, a kid from the Garden Route with raw power who needed some polish.

Grace was perched on a sand dune at Fancourt in fading light 10 years ago watching Els, his hero, make a tense 6-foot par putt against Tiger Woods to end the Presidents Cup in a tie.

''That is when I knew I wanted to play golf,'' Grace said.

Now they're together on the same International team at the Presidents Cup. It's a dream for Oosthuizen and Grace, and it's a bit uneasy for the Big Easy.

''We just kind of ... blended,'' Els said Tuesday after a day of team pictures and practice at Muirfield Village. ''They're pros now. They were juniors and then they were amateurs and now we're professionals and now we're playing together. It's very weird. It's hard to explain.

''Louis and Branden and Charl, I've known them since they were so young,'' he said. ''And now they're playing on the big stage. It's quite nice.''

Oosthuizen, whose swing is regarded as one of the best in golf, is making his debut and happy to do so. He missed the past three months with pain in his lower leg, back and neck and only returned to competition last week at the Dunhill Links in Scotland.

Oosthuizen and Schwartzel were on the wrong end of a bad haircut Monday night, providing more than a few laughs in the International team room.

Then, they played together against Els and showed that there might be plenty of fight from this team that looks outmatched on paper.

''They won all the money today, the two little rascals,'' Els said, choosing his words carefully in front of the cameras. ''We had a ton of money we played for and they won the most money. Maybe they can grow their hair with that.''

The matches start Thursday at the course Jack Nicklaus built, the third time Muirfield Village has hosted an international competition – The Ryder Cup in 1987, the Solheim Cup in 1998 and now the Presidents Cup.

The International team has seven rookies in the Presidents Cup and only one player – Masters champion Adam Scott – in the top 10 in the world. The only American without Presidents Cup or Ryder Cup experience is 20-year-old Jordan Spieth, who is playing so well that he is at No. 21 in the world.

The Americans have never lost on home soil since this event began in 1994. The International team has only won once, in Australia in 1998.

Els and Scott have been the most vocal about needing to make the matches competitive – the past three have been blowouts – and see what it's like to win. Schwartzel has been around Els for a long time, and he noticed a change in his voice when the four-time major champion speaks.

''You can sense in the way he's speaking that he's really tired of being on the losing side,'' Schwartzel said. ''Even out of Adam, too. They've had enough of this.''

Even so, there is a sense of pride from Els when he sees the young Springboks.

''We got pretty lucky to get talent like that,'' Els said. ''And we've got some more talent now in our foundation again. They have really laid a great foundation. They're great kids ... well, they're not kids anymore.''

Grace was 15 when he spent a week at Fancourt in what remains the tensest Presidents Cup. It ended in a tie, and by rule, one name was pulled from an envelope to decide who won the cup – Woods and Els. They halved the first two holes as darkness fell.

Woods rolled in an 18-foot putt that broke both ways, later calling it the most nervous he had ever been. Els rolled in a 6-foot par putt that looked twice as long to halve the third extra hole. The captains declared it a tie.

As they played the 15th hole Tuesday, a video of that moment was being shown on a big screen.

Oosthuizen needed the funding from Els' foundation to develop as a golfer. He was at Fancourt that weekend, but was home at Mossel Bay watching the final round on television.

The ending made a lasting impression. Then again, just about everything about Els has made a difference to him.

''He was a great guy to look up to, what he was doing in golf and the golfing world,'' Oosthuizen said. ''To play under his name and his clothing was like having your hero's shirt on. It was just good fun.''

The Presidents Cup is serious business, especially for a team that never seems to win.

''To be on the same team as him is great,'' Oosthuizen said. ''Everyone is looking up at him and Adam for this week. I think Ernie is the one that is probably going to affect all of us the most by giving us good motivational speeches and just getting us fired up. But as the young side that we are, I think we're all really fired up.''