Els in Match Play semis for first time in 13 years 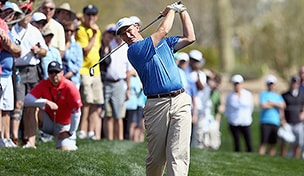 MARANA, Ariz. – The love-hate relationship Ernie Els has with the Match Play Championship is taking a major turn for the better.

Els made a birdie from the desert on the par-5 eighth hole to take the lead for good Saturday against 20-year-old Jordan Spieth, reaching the semifinals in this fickle tournament for the first time in 13 years.

It was the first time all week that Els made more birdies than bogeys, yet he somehow has survived.

''At times I haven't played my best, as you guys have well-documented and know,'' Els said with a laugh. ''But it's match play. I've just done enough to get through.''

Graeme McDowell was the only other player with greater fortune on his side, but that ended Saturday.

McDowell had reached the quarterfinals even though he never led a single hole while any of his three matches were in progress. Just his luck, he finally took a lead and wound up losing the match to Victor Dubuisson of France.

Typical of his week, it went down to the wire.

They were all square with five holes remaining when Dubuisson hit a beautiful chip from the rough in front of a corporate suite behind the 16th green and saved par, while McDowell missed a 6-foot par putt to fall behind.

After matching pars on the 17th, Dubuisson's shot into the 18th rolled off the false front. He chipped perfectly and was conceded his par, and McDowell then missed a 25-foot putt to extend the match.

''Lucky, lucky to even be here today,'' McDowell said. ''But actually played quite nicely most of the day. It all boiled down to my putter actually let me down. I had a chance on 14 for the hole, chance on 15 for the hole, missed a short one on 16. My luck is going to run out sooner than later.''

Els plays Dubuisson, a rising star in the European ranks who won the Turkish Open when Tiger Woods finished third.

In other quarterfinal matches:

- Jason Day reached the semifinals for the second straight year with a 2-and-1 win over Louis Oosthuizen, who played with a nagging back injury.

- Rickie Fowler lost a 3-up lead to Arizona grad Jim Furyk, only to win the last two holes for a 1-up victory for a shot at Day. Furyk was in the same spot as Dubuisson on the 18th hole, but his first chip rolled back down the hill toward his feet.

Fowler is the No. 53 seed, the highest to reach the semifinals since Zach Johnson was No. 59 in 2006 when it was held at La Costa.

Els long held a reputation as a wizard in match play, having captured the World Match Play Championship seven times when it was at Wentworth and featured smaller fields and 36-hole matches. This version hasn't been kind to him.

He reached the semifinals in 2001 at Metropolitan Golf Club in Melbourne, only to lose to Pierre Fulke. Els didn't imagine it would take this long to get back, though he understands that anything can happen – and usually does – over 18 holes of match play.

''I really had a love-hate relationship with this event, as you guys well know,'' he said. ''I was lucky enough to get in the field a couple of years ago and beat Luke Donald in the first round. But most of the time, I lost in the first round here either on the 18th or 19th hole. It's been a frustrating time in this event.''

The semifinals will be Sunday morning, following by the championship match.

''I'm just very glad to be here on Sunday,'' Els said. ''Hopefully, it goes good tomorrow. I still feel I've got a really good one in me.''

Fowler never looked like he would need to go 18th holes the way his match against Furyk started. And then he was happy to get there. Furyk was 3 down with only six holes remaining when he made three straight birdies and won a fourth straight hole at No. 16 with a par when Fowler flubbed a chip. Furyk missed the fairway on the 17th, however, allowing Fowler to square the match.

On the 18th, Furyk came up just a fraction short of perfect and saw the ball roll back down the false front of the green. His chip was heavy, and that one rolled back toward his feet and led to bogey. Fowler navigated a quick birdie putt down the slope to a concession range and escaped.

''Disappointed,'' said Furyk, in the quarterfinals for the first time in 14 appearances in this World Golf Championship. ''I fought all way back from 3 down. I had all the momentum and I didn't put the ball on the fairway on 17 and didn't put the ball in the fairway on 18. I don't feel I handed the match away, but I definitely made it too easy on him the last two holes.''

It was the third straight round in which Fowler was trailing with three holes to play, and he pulled out wins against Jimmy Walker, Sergio Garcia and Furyk. The only easy time Fowler had was against Ian Poulter.

''It's nice to get a win no matter how it happens,'' Fowler said.