Faldo to take one last walk at Muirfield 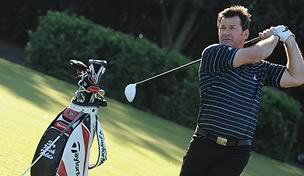 The toughest question for any world-class golfer is to pick his favorite course in the world. It turned out to be easy for Nick Faldo once he set some parameters.

The six-time major champion was filming a promotional spot for Glenmorangie earlier this year when he was asked to name his favorite course and why. Faldo found himself wanting a little bit of everything, from the towering pines of Augusta National to the links courses of the British Open to the coastline of Pebble Beach.

As he tried to figure out how to mix all that together, another element entered the equation – memories.

''Unsolicited, it clicked,'' Faldo said in a recent interview. ''Memorability is important, isn't it? And then I suddenly I thought, 'Muirfield.' That green, the 18th hole, I won two Opens, which is pretty darn cool. That probably woke me up and I thought, 'This is really an important place to me.'''

It means enough that Faldo will play in the British Open next week for the 35th time. The opening round is on the day he turns 56.

He last competed at St. Andrews in 2010, missing the cut with an 81 when he was caught in the worst of the wind. He did not enter another tournament as a tuneup leading up to Muirfield. He is relying on memories, and as good as they are, they won't be enough for him to play like he once did.

''It will be the last walk at Muirfield,'' Faldo said. ''If I could just get in the right frame of mind, if I hit the golf ball solid, that's as good as it gets. If it goes sideways, if I can't put a score on the card, you're going to have to accept that.''

Faldo rarely hit it sideways, certainly not at Muirfield.

It was in 1987 when Faldo famously made 18 pars in a gloomy final round and captured the first of his three Open titles when Paul Azinger faltered. Five years later, Faldo was a machine until he made a mess of the final round, losing a four-shot lead in five holes and then recovering with four of the best holes he ever played to beat John Cook, who helped by botching the last two holes.

Muirfield has the greatest collection of champions of any major course in the world. Faldo and James Braid are the only players to win the Open there twice.

The memories are strong. Faldo doesn't always remember where his shots landed, only how they felt leaving his club, particularly his win in '92. The 5-iron on the 15th hole is one of the best shots he ever hit. Facing a left-to-right wind, he had to work the ball in the same direction and stay left of the flag to let a ridge do the work. He fed the shot into 3 feet for birdie.

''And then the driver and 4-iron on the 17th was as good as it gets,'' he said. ''They had a red telephone box on the corner of the grandstand. I aimed at that and hit a draw, and then a perfect 4-iron 20 feet left of the flag.''

His two wins at Muirfield could not have been any more different.

The press panned him. He recalls seeing other players mimic what he was trying to do with his swing. The worst of it was in the spring of 1987, when he arrived in the Atlanta airport and saw so many players headed east to Augusta National for the Masters. Faldo didn't qualify. He was going in the other direction, to Hattiesburg, Miss.

Starting with the '87 Open at Muirfield, Faldo won four out of the next 13 majors, lost a U.S. Open playoff to Curtis Strange and had three other top 4s in the majors.

But for someone regarded as one of England's greatest golfers, Faldo had a prickly relationship with the press. It started during the rebuilding years, and it didn't improve even after he had won two Masters and two Opens at Muirfield and St. Andrews. Faldo was aloof, which didn't help, and he was sensitive when it came to his swing. It was a bad combination.

That led to his infamous victory speech at Muirfield in 1992, when he was a rambling mess with his emotions and his words after a wild final round where he nearly blew a lead that Faldo now says would have scarred him. His voice was unsteady, and he constantly fidgeted with his hair. Toward the end, he sarcastically thanked the TV commentators for telling him ''how to practice and what to do and what not to do.''

Faldo said he never watched the entire closing ceremony until a few months ago, when he showed it to his youngest daughter. He had no regrets.

''If you take the whole context, I'm in semi shock, you're making it up as you go along. There's a stutter to it,'' he said. ''It's not like it was a premeditated idea. I actually say, 'Thank you from the bottom ... well, heart of my bottom.' It was totally off the cuff.

The relationship he has with Muirfield is grounded only in respect and appreciation, sprinkled with the memories of two claret jugs.

''I could play that golf course every day,'' Faldo said on the video.

The video starts with Faldo trying to name his favorite courses. He talks about Augusta National and Pine Valley, Royal Melbourne and Kingston Heath, Cypress Point and Pebble Beach. The list goes on until the memory kicks in, and the footage shows him making a 4-foot par putt on the 18th at Muirfield to win for the first time.