Family affair for Love and fellow Hall of Fame inductees 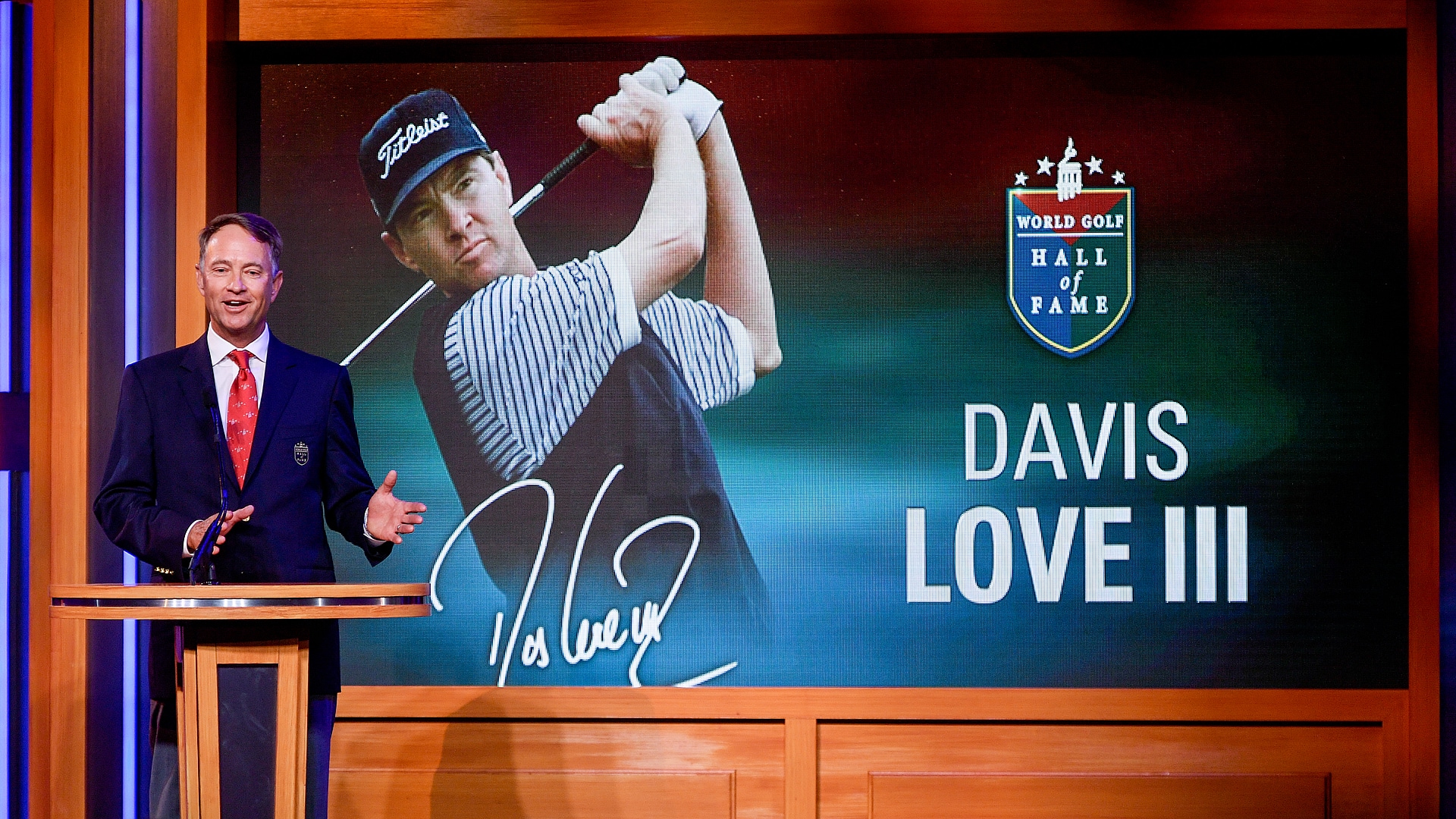 NEW YORK – Davis Love III was among four players inducted into the World Golf Hall of Fame in a ceremony rich in history and praise for the family who helped get them there – and for Lorena Ochoa, a family that allowed her to leave with purpose.

''Golf has improved my life in every way,'' said Love, a PGA champion and two-time Ryder Cup captain. ''This induction is the greatest honor of my life.''

Love, Ochoa, Meg Mallon, Ian Woosnam and late British golf writer Henry Longhurst comprised the class for induction, which now takes place every other year. It was held in New York in conjunction with the Presidents Cup, which starts Thursday across the New York Harbor at Liberty National.

Love ended the two-hour ceremony with two pieces of crystal and his granddaughter in his arms.

The son of a respected teaching pro who perished in a plane crash in 1988 when Love's career was just getting started, he told of how his father won a crystal vase from the 1964 Masters for having the low score of the opening round.

''He didn't win on Sunday – Arnold [Palmer] did – and I was born the day after,'' Love said, his voice cracking at times. ''This piece of crystal unchanged was given to me for the low round in 1995. I was one shot behind the winner.''

''Now I'm in the same club as Harvey and Ben and Tom, the World Golf Hall of Fame,'' Love said. ''This celebration tonight ... is the greatest honor of my life.''

Love won his 21st PGA Tour event two years ago at age 51. Ochoa walked away when she was 28 and No. 1 in the world, wanting to start a family of her own and help impoverished children near her home in Guadalajara.

She said her husband, Andres Conesa, took her to the World Golf Hall of Fame in St. Augustine, Florida, 10 years ago and told her he wanted to be there with her when her plaque was on display, with their family and children.

''And it came true,'' Ochoa said, thanking him for ''giving me strength to announce my retirement.''

''Now I feel the luckiest woman in the world,'' she said.

Ochoa delivered the laughter, mainly her own, as she told her amazing tale of the little girl whose father promised to take her to California if she made the Mexican national team when she was 8. ''To tell the truth, I just wanted to go to Disneyland,'' she said.

She went places no Mexican golfer had ever gone. Ochoa had a three-year stretch of 21 victories and two majors. And along with her three children, she has a foundation that has enabled 4,000 underprivileged children to get an education.

Mallon's idol was another Hall of Famer – Babe Didrikson Zaharias – but for her golf.

She thought the Olympics was her only avenue in sports until Title IX came along and provided the avenue for the Boston-born, Michigan-raised, Ohio State-groomed woman with freckles that burst from her skin and an infectious smile.

Her LPGA career began slowly until she met her longtime swing coach, Mike McGetrick, who inspired discipline and work. Mallon took it from there, winning two majors in 1991, the du Maurier Classic in 2000, and then a popular, home victory in Massachusetts at the 2004 U.S. Women's Open.

On the 50th anniversary of the LPGA, she was named among the top 50 players and teachers.

''I loved the era I played in,'' she said. ''It seemed like we were constantly being told what we were not rather than what we were. What we are, the best damn female golfers in the world who have persevered and are better for it.''

Gary Player introduced Woosnam as a ''wee giant,'' and he was every bit of that. Woosnam was a Masters champion, a two-time Order of Merit winner in Europe, a member of nine Ryder Cup teams and the winning captain of another. He packed power into a 5-foot-4 game and came up big.

He recalled telling a member at his club in Wales when he was 14 that he wanted to be a professional golfer like Player, Arnold Palmer and Jack Nicklaus, traveling the world and winning tournaments.