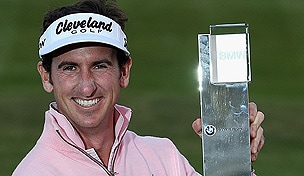 SHANGHAI – Gonzalo Fernandez-Castano grew up watching the famed ''Spanish Armada'' team of Seve Ballesteros and Jose Maria Olazabal, so the Ryder Cup means everything to him. He still recalls the encouragement from Olazabal a year ago.

''Your time will come, and it will come when you're ready,'' Olazabal said to his fellow Spaniard.

There is no better time to be winning than now.

The European Tour just began its richest month of golf, four tournaments called ''The Final Series'' that conclude the Race to Dubai. Every purse is at least $7 million and combined prize money is $30.5 million. Throw out the majors and World Golf Championships, and they are the richest events of the year.

That explains why Fernandez-Castano shot up to the top of the European points list for the Ryder Cup, leading by nearly 300,000 euros.

And it's why European captain Paul McGinley is paying very close attention.

With so much money at stake this time of year – good news for the European Tour, the hotbed of golf at the moment – if a player were to get on a roll this month, he could earn enough money to all but secure a spot on the Ryder Cup team.

Trouble is, the matches are still 10 months away.

''We have to wait to see how it evolves,'' McGinley said at the BMW Masters. ''The one thing that has worked in our favor is that we have a level playing pitch in terms of points are here, and then they spike for the majors. That was it. The worry would be if somebody plays great for four weeks. You can basically make the team these four weeks. Is that a good thing? Probably not.''

He effectively secured a spot on the 2006 team by Christmas, and he found it difficult to keep his form over the next nine months. Thankfully, it didn't matter. Europe had one of its strongest teams for a home game in Ireland, and the Americans had a team that included Brett Wetterich and Vaughn Taylor. McGinley recalls playing his way onto the team in the months leading up to the 2004 Ryder Cup, and he went unbeaten in three matches at Oakland Hills.

Henrik Stenson had such an incredible run in America in September – two FedEx Cup playoff wins – that he leads the world ranking points list by nearly 100.

''I'm not saying it's black or it's white, or it's a bad thing,'' McGinley said. ''If this Final Series were in August, it would be ideal. But it's not. It will be interesting to see where it goes. If a guy plays great for four weeks, who's to say he can't carry it on? But if you were doing it to benefit the Ryder Cup, you'd have the series in August.''

That's what the FedEx Cup has going for it in America.

Maybe it's just a coincidence, but the start of the FedEx Cup in 2007 coincides with a resurgence in American performance at the Ryder Cup. They won in 2008. Only the heroics of Graeme McDowell and the unconscious play of Ian Poulter kept the Americans from winning the last three.

The next stop for Europe is the HSBC Champions and its $8.5 million purse, followed by the Turkish Open ($7 million) and the World Tour Championship in Dubai ($8 million).

In some cases, even more Ryder Cup points are available than it seems.

''No doubt, whoever wins is putting themselves in tremendous shape to make the team,'' Padraig Harrington said. ''Paul better hope it's one of his stalwart players. You'd be surprised what one event can mean. Somebody like me, if I had come in and won this week, it puts me in all the world events. Now I'm able to gather money for playing average because I'm in those events. It's really difficult to make the Ryder Cup team if you're not in the top 50 because you gather points more easily.''

Fernandez-Castano went from No. 60 to No. 32. That put him in two World Golf Championships over the next four months, and all but secured a spot in the Masters.

Paul Lawrie doesn't see it as a problem.

Europe is playing for big money. That's a good thing. These four tournaments have about as much prize money as the next 15 regular European Tour events. And if someone were to get hot in November and secure a spot on a Ryder Cup that is played in September?

''That happens every year,'' said Lawrie, who made his first Ryder Cup team by winning the British Open in 1999. ''We want big tournaments. We want big prize money. And that's what we've got.''

When the Ryder Cup was postponed one year to 2002 because of the Sept. 11 terrorist attacks, half of both teams were not in the same form as when they qualified. McGinley made the team easily that year, and he was concerned about how he would perform at The Belfry. It worked out well for him in the end, of course. McGinley became a part of Ryder Cup lore with an 8-foot par putt to win his match and clinch the cup for Europe.

''I'm not being critical,'' McGinley said. ''But it's going to be interesting to see how this evolves. This year we have a massive amount of points at the beginning of qualifying. Having said that, two years ago because the FedEx had so many points, our guys based in America had a great opportunity to earn ranking points.