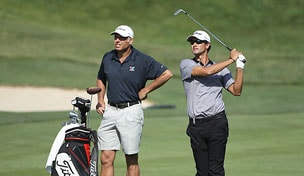 There’s no place for racism in sport or anywhere else. It was right for Williams to apologize, and that was enough for them to consider the case closed without taking action. Time to move on.

In this case, it could be moving from Shanghai to Sydney - and it figures to be open for discussion.

Even as PGA Tour commissioner Tim Finchem and European Tour chief executive George O’Grady issued a statement, Scott was grilled anew Sunday after the final round of the HSBC Champions on whether Williams will stay on his bag.

Williams was roasted at a caddies award party for the exuberant TV interview he gave on the 18th green of the Bridgestone Invitational right after Scott won. Asked about the interview, he replied, “It was my aim to shove it up that black

The Bridgestone was two weeks after Woods had fired Williams.

The comment, while said at a private gathering in which all comments were considered off the record, quickly spread after a caddie shared what was said to a group of British reporters who were not there and not bound by the agreement.

It was all the talk the next two days of the HSBC Champions, especially when Scott stayed in contention, and even as Martin Kaymer birdied nine of his last 12 holes for a 63 to win by three shots.

Finchem and O’Grady said they spoke for the International Federation of PGA Tours that it “feels strongly there is no place for any form of racism in ours or any other sport.”

“We consider the remarks of Steve Williams, as reported, entirely unacceptable in whatever context,” the statement said. “We are aware that he has apologized fully and we trust we will not hear remarks ever gain. Based on this, we consider the matter closed, and we will have no further comment.”

Scott was shown a copy of the statement after signing his card and said he felt comfortable with it.

“I don’t think anyone condones racism in sport or anything,” Scott said.

Scott, who closed with a 73 Sunday and tied for 11th at the HSBC Champions, now heads to Sydney for the Australian Open. Woods also is playing golf’s fourth-oldest championship, and a press conference was scheduled for Tuesday morning. Organizers had planned long ago to put Woods and Scott in the same group for the opening two rounds, along with Jason Day.

The following week is the Presidents Cup at Royal Melbourne, where Scott and Woods - or is that Williams and Woods? - could face each other in any of the four days of competition.

Scott tried to deflect speculation that he could be walking into a frenzy Down Under.

“Hopefully, it’s just for my good play rather than anything else. I don’t think there’s a story going forward,” he said, adding that “the matter has been put to bed and I’ve got nothing more to talk about it with anyone. So I’m moving on.”

Scott and his camp urged Williams to apologize, and the caddie posted a statement on his website the morning after the party that said, “I now realize how my comments could be construed as racist. However, I assure you that was not my intent. I sincerely apologize to Tiger and anyone else I’ve offended.”

Scott has said that while Williams’ comments made it out of the room, context did not go with them. And toward the end of his interview Sunday, the Australian star bristled when a reporter asked if he was condoning a racist remark by not doing anything to Williams.

Scott stared for a moment, his lips slightly pursed.

“Look, I don’t think digging for a story out of me on this is a good idea,” he said. “I had Steve issue an apology. What more should I do? I don’t know if you were there in the evening.”

The reporter shook his head.

“So I don’t think you have a leg to stand on when it comes to commenting,” Scott said.

Kaymer was among several players at the caddies party - as was Scott - and said that Williams “could have used different words.” But the German said he had paid close attention to all the activity that followed, from Williams’ apology to the tours’ statement to Scott’s intention to keep Williams as his caddie.

“I hope it doesn’t have too much effect on Adam, because Adam is a very lovely guy,” Kaymer said. “He’s a great player and I hope it doesn’t affect him too much. But if it was right or wrong, obviously to be racist, it’s never good. It should not be on the golf course or anywhere else. But I don’t really know if he really meant it like this.” 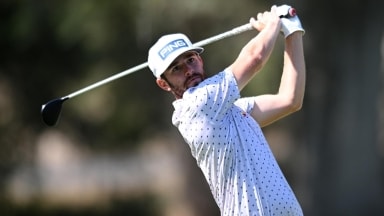