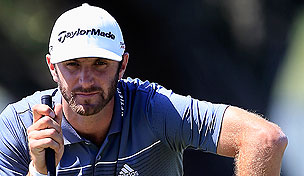 Getty Images
ORLANDO, FL - MARCH 19: Hideki Matsuyama of Japan hits from a green side bunker on the first hole during the third round of the Arnold Palmer Invitational Presented by MasterCard at Bay Hill Club and Lodge on March 19, 2016 in Orlando, Florida. (Photo by Sam Greenwood/Getty Images)  -

DORAL, Fla. – The new Doral in raging wind looked a lot like an old U.S. Open on Friday.

Matt Kuchar played out of the rough to tap-in range for birdie on the 18th hole for a 2-over 74 that allowed him to join an exclusive group at the Cadillac Championship - one of only four survivors to par.

The Blue Monster gobbled up just about everyone else.

Dustin Johnson bogeyed three of his last six holes for a 74. Patrick Reed made only two birdies in his round of 75. Hunter Mahan atoned for a triple bogey with a short eagle putt for a round of 74. They joined Kuchar atop the leaderboard at 1-under 143.

Only three players broke par in the second round. No one shot in the 60s. The average score was a fraction under 76.

''I don't think I've played in conditions this difficult in the U.S.,'' Graeme McDowell of Northern Ireland said after a 71 that left him one shot behind. ''It's an Open Championship day. It's a real Friday afternoon at St. Andrews in 2010 before they called it. It was hard out there - really, really hard.''

Tiger Woods hit three balls in the water and scraped out a 73, thanks in part to a 90-foot birdie putt on the par-3 fourth hole. Phil Mickelson made back-to-back double bogeys, and then laid on his back along the bank of the fourth tee during a long wait. He got up, hit into the water and made another double bogey. Lefty shot 75.

Both were still in the mix, only six shots behind.

''It's a tough golf course as it is,'' Reed said. ''And with how hard the wind is blowing, it made it even tougher. Almost felt like we were playing at a major today.''

At times, it looked even worse.

Fist pumps were replaced by players stretching out their arm to take a penalty drop from the water - more than 100 balls in the water, which is everywhere on the course that Gil Hanse redesigned under the direction of new owner Donald Trump.

Trump described it as bold. It turned out to be brutal.

And just like a U.S. Open, there were plenty of complaints.

The greens were always going to be firm because the course was built in under a year. There was always going to be concern about the sharp edges of fairways and greens that sent balls down the bank and into the water. Throw in gusts that topped 30 mph, and any score was possible on any hole.

''The setup is horrendous,'' Webb Simpson said after a 78 that included a bunker shot that went onto and over the seventh green and into the water. ''Even if we had a 10 mph wind, it still would have been bad. I played terrible. I want to get that out there. But when you have conditions like this, and a setup like this, so much luck comes into play.''

Henrik Stenson prefaced his comments by saying, ''How do you say something you might regret the rest of your life?''

Stenson, part of the Nos. 1-2-3 grouping from the world ranking, had a 76 and joined Woods at 5-over 149. Masters champion Adam Scott, the other member of that illustrious trio, had a 73 and was at 4-over 148. The group was a combined 14-over par for the tournament.

Stenson was walking off the 15th green Friday morning while finishing up the rain-delayed first round. Spotting a small group of reporters, he said, ''Are you having fun watching?'' And then as he walked away, he smiled and said, ''Because it's sure as hell not any fun to be playing.''

Johnson managed for the longest time. Even as everyone was succumbing to par, he was at 3 under with a birdie on No. 12. But he dropped a shot on the par-3 13th. His short iron into the 15th hit the green and rolled over the back and into the water. And on the 18th, his fairway bunker shot came out too strong and over the green, and he missed a 6-foot par putt that would have given him the outright lead.

The forecast is for less wind on the weekend, and surely a sigh of relief from the players.

And this World Golf Championship is wide open.