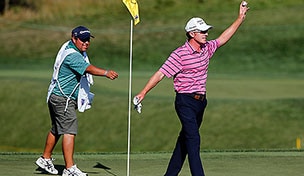 BETHESDA, Md. – Roberto Castro went from a share of the lead to five shots behind in three holes. He finished the third round of the AT&T National by hitting a 5-iron left of the 18th green and into the water. And he still managed to be part of a four-way tie for the lead.

Not just for Castro. It was like that for just about everyone Saturday at Congressional.

Bill Haas hit a wedge into the water and made triple bogey on the 11th hole to fall five shots behind. Four holes and three birdies later, he had the outright lead. He was helped by Andres Romero, who squandered a three-shot lead in two holes by hitting his tee shot into a creek.

With all that action, James Driscoll must have felt as if he missed out on all the fun. All he did was post his third straight round in the 60s to join the leaders.

Castro put the perfect finishing touch on a theatrical afternoon by taking his penalty drop from the water on No. 18 and chipping in from 80 feet for par. That enabled him to salvage an even-par 71 and claim a share of the lead with Haas (68), Driscoll (68) and Romero, who closed with six pars for a 70.

''Saving a bogey would have been huge,'' Castro said. ''Making a par is just a bonus.''

They were at 7-under 206, which means next to nothing - not with 10 players separated by three shots going into the final round, with seven of those players looking for their first PGA Tour victory.

Still in the mix is 19-year-old Jordan Spieth, who had a two-shot lead after opening with a pair of birdies. He also went through a five-hole stretch when he missed five putts inside 8 feet - including a three-putt from 5 feet for double bogey on No. 8. The Texas teen had a 74, though he's still in the game, just three shots behind.

''Making a double on the easiest hole on the course, and then following up with bogey on a par 5 with a lob wedge in my hand, it was very difficult at the turn for me to stay calm and hit good shots to start the back nine,'' Spieth said. ''Maybe lost a couple of shots with my emotions there, which is upsetting. But like I said, I shot 5 under yesterday. I could shoot 5 under tomorrow and be in great position.''

Jason Kokrak had a 70 and was one shot out of the lead, while Charlie Wi had a 29 on the front nine and shot 65 to finish two shots behind, along with Tom Gillis (66). Spieth was in the group at 209 with Brandt Snedeker, who had a 69.

Haas might be better off except for a pair of wedges. One went into the water on the 11th leading to triple bogey, another came up short on the par-5 16th and led to a bogey. The bright side was his nine birdies to offset that triple and three bogeys.

''The back nine, I didn't really know where I was going,'' Haas said. ''Luckily after that triple, I was able to hit three decent iron shots and then make the putt. Certainly, it could have been a 6-, 7-, 8-under day. But it also could have been a 4-, 5-, 6-over day if I hadn't putted well. I don't really know what to make of how I'm playing. Just got to hopefully do more good than bad tomorrow.''

Romero was the only player to reach 10 under at any point, with four birdies on the front nine, including a sand wedge out of ankle-deep rough left of the eighth fairway to about 5 feet. He was sailing along until he set up for a fade on the 11th hole and came off the shot, sending it into the hazard.

Castro's problems were early, and not entirely up to him. After a bogey on the par-3 second hole when he was on the down slope of a bunker to a short pin, he hit a tee shot right of the third fairway. Just his luck, the ball landed in the soft sand at the edge of the grass and disappeared. The ball was buried under an inch of sand that Castro had to scrape away just to make sure the ball was his. He took a penalty shot to drop it in the middle of the bunker, couldn't reach the green and made double bogey.

''Nothing good was going to happen if I swung at it,'' he said. ''And I thought, 'If I dropped, pitched out, I could make bogey or double, which is not the end of the world.' I didn't need to sit there and make 8 or something.''

Through it all, the son of Peruvian parents with an industrial engineering degree from Georgia Tech never panicked.

''Over four days here, every player is going to hit kind of a rough patch,'' Castro said. ''I don't see it being easy out here. ... So mine just came early today, and I just tried to survive it.''

It looked early on as though the more times Spieth put himself in contention, the more comfortable he would be. That only lasted a short time.

He opened with a 10-foot birdie putt and followed that with a tee shot that used the backstop perfectly on the par-3 second, the ball rolling back down the hill to 2 feet for a tap-in birdie. After a good par on the third hole, he had a two-shot lead.

Five holes later, he was four shots behind.

That's how quickly the scores changed on a balmy Saturday at Congressional - not just for Spieth, but for everyone.

Spieth's troubles began when he missed the green long and right on the fifth hole, leaving him a downhill chip to an elevated green. The best he could do was 15 feet and he missed his par putt, ending his streak of 33 straight holes without a bogey.

He missed an 8-foot birdie putt on the par-5 sixth. After hitting 3-wood into thick rough left of the fairway at No. 8 and hacking out short of the green, Spieth had a chance to save par until he three-putted from 5 feet. And on the ninth, his wedge spun off the front of the green and rolled down the hill, leading to another bogey. If that wasn't enough, he missed a 7-foot birdie putt on the 10th.

''I think the way this course is set up with this thick of rough and narrow fairways, if you don't drive it good, you can make bogey on any hole,'' Haas said. ''The greens are soft enough that if you hit good drives, you can hit it close. You're seeing birdies, but you're also seeing some loose shots gets penalized.'' 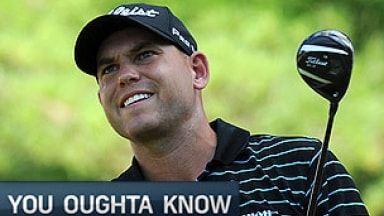 See the facts and figures You Oughta Know heading into the final round at Congressional, where four share the 54-hole lead.