THOUSAND OAKS, Calif. – Jim Furyk had a lot of expectations when he arrived at the Chevron World Challenge. They didn’t include winning for the first time in more than two years.

He is good friends with tournament host Tiger Woods, his partner for nine matches in cup competitions. They are an odd couple on the surface, linked mainly by the grit in their golf games.

Furyk sent Woods a text message when he heard about the Nov. 27 car accident and never heard back. Before long, speculation gave way to allegations of extramarital affairs, until Woods posted a statement on his Web site acknowledging “personal failings.”

Jim Furyk celebrates his par save on the 17th hole Sunday. (Getty Images)

“I expected a lot of questions would be asked about Tiger a lot this week,” Furyk said after closing with a 5-under 67 for a one-shot victory Sunday. “I can honestly say not one person has asked me for a quote or an opinion or anything like that. He and his wife are friends of mine. And as friends, you want to support them and wish them the best.”

No one bothered him because Furyk was in the middle of the pack in the 18-man field at Sherwood Country Club.

He was easy to miss until the final round, when he took the lead with a wedge to close range for birdie on the 10th, kept it by knocking in a 35-foot par putt on the 17th hole and making his best shot of the day the winning shot – a 9-iron from 146 yards on the 18th hole that landed near the cup and spun 5 feet away for a birdie.

Even more noticeable was the red shirt Furyk wore on Sunday, the color Woods has made famous during his 82 worldwide victories and 14 major championships.

Furyk said that was a coincidence, nothing more.

Even so, it was a fitting conclusion to a week dominated by talk of Woods.

Woods wasn’t around to present the trophy to one of his favorite players on the PGA Tour. He withdrew because of unspecified injuries from his accident, yet he remained part of every conversation because of worldwide publicity over his off-course scandal.

Woods posted a statement on his Web site as the final round was under way to thank his sponsors, staff and volunteers. “And I am sincerely sorry I was unable to fulfill my duties as host and player in this important event,” he said.

Furyk recalls wearing red – a rarity for him – in the final round of the 2007 Canadian Open, his last victory at a tournament recognized by the world golf ranking.

“Maybe I need to start,” he said. “But no, I didn’t mean to make a statement or didn’t really think about it. So you like the outfit? I’m curious what my grade is.”

Considering it was bright red with a brown stripe and brown pants, leave that to fashion experts.

His golf – especially at the end – was simply superb.

With a one-shot lead and in a horrible spot in the bunker well below the 17th green, Furyk played it safe to 35 feet beyond the hole and was hopeful of lagging a tricky putt to 3 feet to make no worse than bogey. Instead, he watched it break sharply to the right over the final few feet and drop into the cup for an unlikely par.

“It was a deep sigh of relief that the ball went in,” Furyk said. “I knew at that point it was still my tournament to win, and I played very aggressively down the stretch.”

He followed that with a 9-iron from 146 yards that landed near the hole and spun back to 5 feet. Before he could putt, Furyk saw on the leaderboard that Lee Westwood had birdied the 17th and was tied for the lead. He calmly rapped in the birdie putt.

Westwood, who recently won the European tour money title for the second time this decade, had a chance to force a playoff until he failed to hole his chip from just off the green. Then, he missed the short par putt for a 70 that left him in a tie for third with Padraig Harrington, who twice chipped in for eagle on his way to a 70.

Graeme McDowell, the replacement for Woods at this tournament, had to hole out from 18th fairway to tie Furyk, and his shot looked as though it had a chance until it spun by the hole. The birdie gave him second place alone.

Then came a phone call about Woods withdrawing, and everything changed quickly.

“Timing is everything,” McDowell said. “To get the call-up was good, although I wish it had been different circumstances. Sometimes this game gives you something back when you least expect it.”

Furyk said he wouldn’t be surprised to get a text from Woods for winning his tournament for the first time. And if he did, “then I would reply and wish him the best.”

“Tough times,” Furyk said. “So they need the support of their friends right now, and I know that people are thinking about them.” 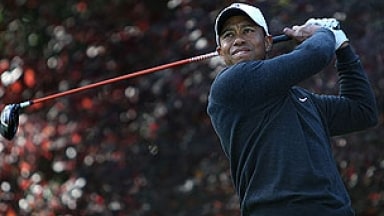 Graeme McDowell is known at the Chevron World Challenge as the guy who replaced tournament host Tiger Woods in the field.

Despite battling a fever and a pounding headache, Y.E. Yang has shot a 7-under 65 to build a two-shot lead going into the weekend at the Chevron World Challenge.