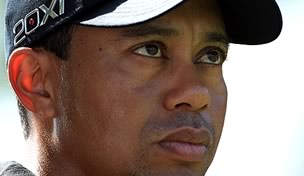 JACKSONVILLE, Fla. – Tiger Woods returns to golf under a new set of circumstances.

He no longer has the caddie he employed for the last 12 years, having fired Steve Williams a month ago. He no longer is among the top 20 in the world, his lowest ranking since Allen Iverson was an NBA rookie. And he might not even be eligible to play on the PGA Tour after a couple of weeks.

After missing two majors during an 11-week break to make sure his left leg was fully healed, Woods announced Thursday evening on Twitter and on his website that he would return next week at the WGC-Bridgestone Invitational.

“Feeling fit and ready to tee it up at Firestone next week. Excited to get back out there!” he tweeted

By missing three months – but only four tournaments he would typically play – Woods has gone from No. 81 to No. 133 in the FedEx Cup standings. Only the top 125 players qualify for the opening round of the playoffs at The Barclays, likely leaving him only the Bridgestone Invitational and the PGA Championship next week to make up ground. Otherwise, he would have at least five weeks off without being able to play on the PGA Tour.

This was the third-longest layoff of his career, and there is as much uncertainty as ever about his future. He has gone more than 20 months without winning, and was last seen in golf shoes on May 12 at The Players Championship when he hobbled off the course after a 6-over 42 on the front nine and withdrew.

He already has had four surgeries on his left knee, and the left Achilles’ gave him just as much trouble. He hurt both of them during the third round of the Masters, although the injuries were described as “minor” when he first mentioned the pain in May.

Along with his health, there has been change off the golf course. Woods left IMG when the contract of longtime agent Mark Steinberg was not renewed. The only endorsement deal for Woods since he returned from a devastating sex scandal was with a Japanese company to promote a heat rub.

Then came the firing of Williams, who caddied for Adam Scott at the U.S. Open, then angered his boss by working for the Australian again at the AT&T National without seeking permission.

Golf Channel reported Thursday night that Bryon Bell, a childhood friend and president of Tiger Woods Design, would caddie for him at the Bridgestone Invitational. Bell has caddied for Woods a no fewer than six times, including wins at the the 1996 U.S. Amateur and 1999 Buick Invitational.

Steinberg declined to confirm Bell would be on the bag, saying in a text message that “no long term been discussed yet as he just decided tonight he was fit and ready to go next week.”

Bell would bring a level of familiarity to Woods, although Bell was implicated during Woods’ sex scandal as allegedly arranging travel for one of his mistresses.

During his absence, Luke Donald rose to No. 1 in the ranking and 22-year-old Rory McIlroy shattered his scoring record in the U.S. Open at Congressional. Woods had said in July, when he appeared at the AT&T National because it benefits his foundation, that he learned his lesson and would not play again until he was fully healed.

Swing coach Sean Foley said he has talked with Woods twice in the last few weeks, although he has not been with him on the practice range. Woods said on his website that he only recently began practicing.

At least he is returning to a friendly course – Woods has won seven times at Firestone, matching the most he has won on any course as a pro. However, he was at his low point on the course in the Bridgestone Invitational last year when he finished 78th in an 80-man field with the worst 72-hole score of his career. Before that, Woods had never finished out of the top 5.

Woods missed the second half of the 2008 season following reconstructive knee surgery, then sat out five months after crashing his car into a fire hydrant on Thanksgiving night in 2009, changing his career on and off the golf course. His image tarnished, he lost four major corporate endorsements and still has not found an endorsement for his bag. He was divorced in August 2010 and shares custody of his two young children.

On the course, Woods has lost the aura he built while becoming the sport’s most dominant figure in the last 40 years. He remains stuck on 14 majors – the last one was in the 2008 U.S. Open at Torrey Pines – and he nearly missed the cut the last time the PGA Championship was played at Atlanta Athletic Club in 2001.