Guthrie four up, Daly six back at BMW Masters 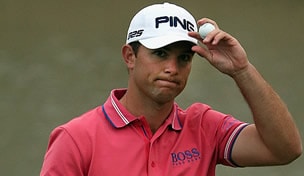 SHANGHAI – Luke Guthrie brought only one 2-liter bottle of Mountain Dew from America, enough of a caffeine fix to get him through the week without headaches. He packed only one sweater – lime green – because his crash course on Shanghai did not include checking the forecast.

At this rate, Guthrie might end up staying another week, a problem he would love to have.

Guthrie coped with another day of harsh wind and plunging temperatures Friday with a 1-under 71, giving the 23-year-old American a four-shot lead over six players going into the weekend at the BMW Masters.

A victory would make him eligible for his first World Golf Championship next week across town in the HSBC Champions.

''I was just coming over to challenge myself, put myself in a new environment and see what I could make of it,'' Guthrie said. ''I'm playing well right now. I've got 36 more holes and I'm looking forward to the opportunity and hopefully I come out with a 'W' and get to stay in Shanghai longer.''

Guthrie never let anyone get closer than two shots at Lake Malaren, and he started to pull away with a 20-foot birdie putt that broke three directions on the par-3 17th. But his misjudged the speed of the 18th green on a long chip, and then narrowly missed a 10-foot par putt on his last hole.

It was a tough way to end a solid day, though he had no complaints at 8-under 136 and four shots clear of the field.

Even as everyone else was battling par and conditions that were getting colder by the minute, Guthrie marched along in short sleeves. That wasn't by choice.

''I should have looked that up about Shanghai before I came here,'' Guthrie said. ''I didn't know exactly what the weather was going to be like. I only have one sweater here. I'm wearing blue and pink today, so I'm kind of out there already. I didn't want to put a green sweater on top of it. So I just dealt with being a little cold.''

Ricardo Gonzalez didn't make a bogey until the final hole and still had a 67, the lowest round of the day. Also in a tie for second were Scott Jamieson (68), Paul Casey, Thongchai Jaidee, Craig Lee and Simon Dyson, who each shot 70.

John Daly showed plenty of power but couldn't make a putt in his round of 74, which included a double bogey-birdie-bogey finish. He was six shots behind.

Peter Uihlein, who was two shots behind after chipping in for eagle at No. 7, made six bogeys over his next seven holes. He tried to salvage his round with two later birdies, only to catch a mound short of the 18th that sent his approach into the bunker for one last bogey and a 75. He was at 144.

As for Guthrie, not everything that happens in Las Vegas stays there – such as his game. He closed with a 64 in Las Vegas to tie for fifth and then flew straight to Shanghai, leaving him enough time to get over jet lag and see the Jack Nicklaus design at Lake Malaren in the pro-am.

Even if he didn't bring enough warm clothes, he brought his game.

''I'm playing well. I was in good form coming here and had been hitting it really well,'' Guthrie said. ''Kind of felt the trend going in the right direction.''

Guthrie made his first bogey of the tournament with a tee shot that left him against the lip of a fairway bunker on No. 5, and he had to knock it out to the fairway. He dropped another shot on the 10th, and hit a poor shot that left him in an impossible spot on the 12th. Everything else, however, was solid. He rolled in a 15-foot birdie on the 11th, got up-and-down behind the green on the par-5 15th for a birdie and hit 6-iron into 20 feet on the 17th.

The BMW Masters is the start of ''The Final Series'' on the European Tour, four tournaments with at least $7 million in prize money that concludes the Race to Dubai. Guthrie, coming off his rookie season on the PGA Tour, has no stake in that. A win, however, would make him eligible for the HSBC Champions next week in Shanghai, which counts toward the FedEx Cup on the U.S. circuit.

Only 18 players in the 77-man field were under par, a testament to the tough conditions.

Rafa Cabrera-Bello didn't figure to be among them until he ran off five straight birdies late in his round for a 68, leaving him five shots behind. Ian Poulter got back in the game until two late bogeys forced him to settle for a 69. Poulter was at 1-under 143, along with Rory McIlroy, who bogeyed the last hole for a 72, and Lee Westwood (71).

Graeme McDowell, in his first event since getting married at the end of September, was trying to push his way up the leaderboard until he bogeyed three of his last five.

''It's been very tough the last two days in the wind,'' Casey said. ''These are not conditions I expected or wanted. But it makes a very good, difficult golf course even more so. It's a great test of golf, which is I guess what we want. This is the Final Series for us in Europe. It's meant to be difficult, and it has been.''