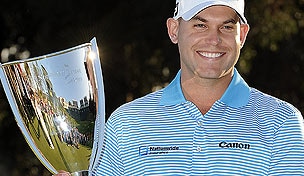 LOS ANGELES - Bill Haas wound up making the biggest putt of them all at Riviera.

On the second extra hole of a three-way playoff Sunday - made possible by long birdie putts from Phil Mickelson and Keegan Bradley on the final hole - Haas rolled in a 45-foot birdie putt across the 10th green to win the Northern Trust Open.

Haas closed with a 2-under 69 and won a PGA Tour event for the third straight year.

He was on the practice range at 7-under 277, warming up for a playoff that didn’t look likely. Mickelson and Bradley, the co-leaders going into the final round, were one shot behind on the 18th hole, which had given up only six birdies all day.

With tournament executive director Jerry West looking on, Mickelson rammed in a birdie putt from just outside 25 feet, pointing his putter and slamming his fist as the gallery packed into the hill below the stately clubhouse let out a cheer that could be heard down Sunset Boulevard.

Mickelson bumped fists with Bradley and told his protege, “Join me.”

That he did. Bradley’s birdie putt from just outside 12 feet took one last, slow turn at the cup and disappeared, setting off another enormous cheer. No one had to tell Haas what was happening.

They started the playoff on the 18th, and Bradley had the best look at birdie with a 15-footer from just off the back of the green that touched the right side of the cup.

It was decided on the 312-yard 10th hole, regarded as the best short par 4 in America, certainly among the most interesting holes in all of golf. It can be reached with a drive, but it’s all about position - and none were in a particularly good spot.

Haas went long into thick rough, with enough of the back bunker in his way that he smartly played out to the right and left himself a long birdie putt that at least would assure him par.

Mickelson and Bradley each came up short, a horrible angle. Mickelson’s flop shot landed near the hole and rolled into the back bunker. Bradley was in the bunker, and did well to blast out to 15 feet, just through the green.

Haas ended the suspense with his putt.

Bradley, who closed with a 71, missed his birdie putt after Mickelson, who also had a 71, failed to hole his bunker shot.

“I didn’t think he was going to make that one,” Bradley said. “I should have known, though, because he’s a great putter and a great player.”

Haas, the FedEx Cup champion, captured his fourth career PGA Tour title and moved to No. 12 in the world.

Mickelson, who rallied from six shots behind with a 64 to win last week at Pebble Beach, was trying to become the first player since Tiger Woods in August 2009 to win back-to-back on the PGA Tour.

Mickelson missed three straight putts from just inside 10 feet on the back nine - two for par, one for birdie - but atoned for it with his birdie on the 18th, the longest putt he made all day.

Bradley also missed a pair of putts from inside 10 feet down the stretch until coming up big on the 18th.

Mickelson seized control early with the best shot he hit all week. With pin tucked in the back right corner on a new green at the fifth hole - a deep swale behind it and to the right - Mickelson hooked a 9-iron that started out toward the gallery and wound up 4 feet away for birdie.

That put him at 9 under, two shots clear of Haas, who had birdied the par-3 sixth two groups ahead. Jonathan Byrd, who had been tied for the lead, made double bogey on No. 5 with a hooked tee shot into the hay.

All it took was a pair of mistakes by Mickelson to turn the back nine into a shootout, with a half-dozen players in the mix.

He missed the dual fairway on the eighth and couldn’t reach the green, chipped 6 feet by the hole and missed the par putt. Then, he failed to clear the fairway bunker on No. 9 and had no chance of getting home. His wedge was 20 feet short, leading to another bogey.

The game was on.

Haas started the back nine with a birdie to take the lead, only to give it back with consecutive bogeys when he came up short on the 12th and missed the fairway left on the 13th. Bradley and Mickelson each made birdie on the 11th to reclaim a share of the lead, then took turns falling out of the lead—Bradley missed the green to the left on No. 13 for bogey, Mickelson with a three-putt from 50 feet on No. 14.

Mickelson three-putted again from 70 feet on the 15th, but Bradley also missed a 7-foot par putt on the same hole.

Four players had at least a share of the lead throughout the final round. Dustin Johnson was not among them, though he stayed in the hunt until the end. Needing a birdie to match Haas, he leaked his approach to the 18th and then bladed his chip across the green. He had to scramble for bogey and a 71, putting him in a tie for fourth.

Garcia never had a chance to win, though the Spaniard sure made it interesting.

His momentum ended with a bogey on the par-3 fourth, and he had to settle for a 64, the best round of the tournament.

“Everything had to be absolutely perfect for me,” Garcia said. “I obviously couldn’t make any bogeys. It’s not that easy.”

Luke Donald, the No. 1 player in the world, struggled after the opening round and closed with a 78.