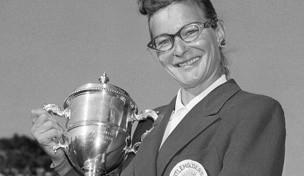 Getty Images
AUGUSTA, GA - APRIL 06: Amatuer Toto Gana of Chile runs to watch his shot on the first hole during the first round of the 2017 Masters Tournament at Augusta National Golf Club on April 6, 2017 in Augusta, Georgia. (Photo by Andrew Redington/Getty Images)  -

It didn't take Beverly Hanson long to realize that playing golf was more rewarding than writing about it.

The pay was better, too.

Equipped with a journalism degree from North Dakota, she went to work at The Fargo Forum for 50 cents an hour and was assigned to cover a men's golf tournament. Her first byline was under the name ''Ben Hanson'' because the editor assumed the writer made a typo.

Then, she was playing golf in Florida that winter in 1944 when Hanson discovered lawn attendants were making more money.

''That's how I decided to be a golfer,'' Hanson told The Forum years later.

Hanson died April 12 in Twin Falls, Idaho, from complications of Alzheimer's and chronic obstructive pulmonary disease. She was 89.

Louise Suggs twice finished runner-up to Hanson in major championships. She's troubled that Hanson's career has largely been overlooked, even in death.

''I'm surprised nobody picked up on the fact she passed away,'' Suggs said Tuesday from her home in St. Augustine, Fla. ''I knew Bev from the very beginning. We played amateur golf together. She was a clever person, always quick on the draw. She was a great addition to the tour.''

Hanson was a key link to the formative years of the LPGA Tour, even though she was not among its 13 founding members.

The year the LPGA was formed in 1950, Hanson won the U.S. Women's Amateur at East Lake - Bobby Jones presented her the trophy - went 3-0 in the Curtis Cup and finished the year by beating Patty Berg in the Texas Women's Open as an amateur.

She won her first event after turning pro in 1951 by beating Babe Zaharias in the Eastern Open.

Hanson won 15 more times over the next decade, including three majors. That included the inaugural LPGA Championship in 1955 when she beat Suggs twice in one week. Hanson finished three shots ahead in stroke play in Fort Wayne, Ind., and then won 4 and 3 in match play between the top two medalists.

''She was a powerful hitter of the ball, and she had a powerful temper,'' former U.S. Women's Amateur champion Barbara Romack said Tuesday. ''I remember we were paired behind their group and she hit this booming drive on the second hole, a duck hook that went down a hillside in the trees. Now she's really mad. She was walking down the fairway picking up rocks in the rough. She picked up her golf ball, unknowingly, and tossed it down the canyon in the water. She was quite a player, and quite a character.''

Suggs laughed when she heard that story, and then added one of her own.

''We were in Gatlinburg, Tenn., and the front nine is very hilly,'' Suggs said. ''She hit a ball up on the side of the mountain, and as she was addressing the ball, it started to roll. We wore skirts in those days, and I can still see her pulling her up her skirt and looking between her legs watching her ball roll away. She was the class clown, so to speak, so good-natured. She was a good kid.''

Hanson won her third major at the Titleholders in 1958, the year she claimed the LPGA money title with $12,639 and the Vare Trophy for the lowest scoring average. She retired three years later when she married Andrew Sfingi, and they raised two sons. Hanson stayed active as the women's golf instructor at Eldorado Country Club in Indian Wells, Calif., for 35 years.

Golf author and historian Rhonda Glenn saw Hanson at the USGA's centennial celebration in 1995. Hanson was still making them laugh with a story about Jones presenting her the trophy at East Lake.

''She said, 'When I was presented that trophy from Robert T. Jones Jr., I stood there with a smile on my face bigger than when I got married, bigger than when I came home from my honeymoon. It was the greatest day in my life,''' Glenn said. ''She was so smart, and so funny.''

Glenn put together an obituary for the USGA's website. The LPGA Tour has made no mention of Hanson's passing on its website.

Mark Johnson returned to his roots in North Dakota nine years ago when he became head pro at Fargo Country Club, where Hanson's father long ago was a member. He recalls seeing a framed photograph in a short hallway that leads to a dining room in the clubhouse. It was Hanson posing with the U.S. Women's Amateur trophy.

''I thought that was pretty neat,'' Johnson said. ''In visiting with older members, they would talk about her, but not give any detail. She won the Amateur. The photo was taken at Fargo Country Club. That was really the extent of my research.''

Sports Illustrated in 1999 published a list of each state's top 50 athletes ever. The only golfer from North Dakota was Shane McMenamy at No. 40. He won the U.S. Junior Amateur in 1996, the first 16-year-old winner since Tiger Woods.

These days, any buzz about golf and North Dakota is about Amy Anderson, an LPGA rookie from tiny Oxbow, N.D., who tied for seventh in Hawaii one week after Hanson died.

Johnson, meanwhile, plans to take that framed photo of Hanson and create a prominent display at Fargo Country Club for everyone to see, allowing members to appreciate Hanson's career and her contributions.

''I showed it to my 14-year-old daughter,'' Johnson said, ''and the next day she was out here practicing for four hours.''