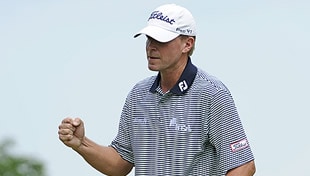 KAPALUA, Hawaii – Steve Stricker is back on Maui, a familiar place for a guy who has won on the PGA Tour in each of the last three years to qualify for the season-opening Tournament of Champions.

Not so familiar are some of the guys he’ll be trying to beat.

Twelve players in the 28-man field are at Kapalua for the first time, more evidence of change on the PGA Tour. A year ago, Stricker didn’t know who most of them were.

Keegan Bradley? He was known more as the nephew of LPGA great Pat Bradley until he won two times, including that unlikely comeback in Atlanta to capture the PGA Championship in his first try at a major.

“I know them now a little bit,” Stricker said Thursday on the eve of the opening round.

The PGA Tour season gets under way Friday. It wants to get away from the NFL playoffs on Sunday, so the final round will end Monday just before the BCS Championship game starts.

The Tournament of Champions will be missing 11 players who didn’t or couldn’t make it to Hawaii. It’s the biggest list of no-shows since this tournament moved to Kapalua in 1999, though it’s a product of the changing world of golf.

Three of the players are recovering from injuries, five of them are based overseas and Luke Donald, the No. 1 player in the world, just finished a whirlwind trip around the world that took him deep into December. Like many other players, this is his offseason.

That’s not the only change.

Phil Mickelson and Tiger Woods are no longer part of the top 10 in the world ranking. There are no Americans among the top five in the world ranking for the first time in nearly two decades. And even without the likes of U.S. Open champion Rory McIlroy, Masters champion Charl Schwartzel or Martin Kaymer in Hawaii, the young guys are making a strong push.

There were 13 winners in their 20s last year, and nine of them are at Kapalua.

“There’s been a transformation of players out here, and it was going to happen eventually,” said Stricker, who turns 45 next month. “We saw Tiger and Phil slip out of the top 10, and we have some European players coming in there – young European players and young Americans – playing well and stepping right up early on in their careers. So it’s fun to see.

“Right now it seems that young is good.”

His hope is that experience still counts for something, especially on the Plantation Course at Kapalua that is unlike any other course the players will see all year. The course was built on a mountain, offering severe changes in elevation, massive greens with slope and grain, and uninterrupted views of the Pacific Ocean.

The surf has been particularly strong on Maui this week, and it creates quite the contrast. Players working their way along the back nine can look down the cliffs and see the ocean littered with surfers off the point at Honolua Bay.

The winners get a small head start on the rest of the PGA Tour in a short field with no cut, essentially free money from the $5.6 million purse and a jump in the FedEx Cup standings.

It worked beautifully last year for Jonathan Byrd, who won his final event of 2010 to qualify for Kapalua, then opened his season with a playoff win over Robert Garrigus.

Byrd was walking through the Maui airport when he saw promotional posters of him on the wall. His son, Jackson, looked at the poster and said, “Dad, I think you’re famous.”

“I said, ‘At least for this week I am,”’ Byrd replied. “You get out there and you just get excited to get the year started.”

So many of these players are looking for an encore – especially Bradley.

A year ago, he was getting ready for his rookie season to begin at the Sony Open and being more nervous than he cares to remember. He never would have imagined winning a major, much less returning to Hawaii a week earlier to start his season.

“I was a mess. I was so uptight about it,” Bradley said. “At this time last year, I wasn’t thinking this tournament at all. I was thinking about how I wasn’t ready to play on the Tour, how I needed to practice 12 hours a day to get ready. So it’s pretty remarkable to be here.”

Bradley will try to build on his big year, the same as FedEx Cup champion Bill Haas and Webb Simpson, who was second in the FedEx Cup and lost out on the money title to Donald in the final event. Simpson didn’t qualify for this tournament until the week before the FedEx Cup playoffs began.

Vegas won the Bob Hope Classic, and then didn’t do much the rest of the year. Woodland won in the Florida swing and made the cut in every major. He has big potential to go with his big swing, though he starts the year by taking on a new agent (Mark Steinberg) that wound up costing him his old coach (Randy Smith).

And while the 28-man field ties the Kapalua record for the smallest number of players, it could get even smaller. Lucas Glover sprained his right knee while paddle boarding over the weekend and is not sure he will be able to play.

“I hate to come out here and not be able to compete,” he said. “But it could be worse. I could be somewhere not as pretty.”