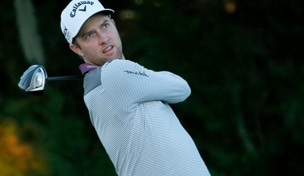 Getty Images
Heading into the 2002 U.S. Open at Bethpage Black Tiger Woods was the clear favorite, but you wouldn’t have thought that by the crowd reaction at the New York public course. Hosting the U.S. Open for the first time, New Yorkers flocked to Bethpage, setting attendance records along the way. Mickelson played the role of the underdog in 2002 and was highly regarded as the best player without a major at the time, which is why the crowd embraced him at every turn. Thus, the "love connection" was formed between Mickelson and the New York gallery. Lefty’s playing partner in the final round, Jeff Maggert, marveled afterward that “I've never seen a crowd behind a player more in a round of golf.” (Getty)  -

ST. SIMONS ISLAND, Ga. – Chris Kirk was at his best when the wind was at its worst Friday in the McGladrey Classic.

Kirk rolled in a 40-foot birdie putt from off the green, chipped in from nearly 60 feet for birdie on another hole and wound up with another 4-under 66 at Sea Island to take a one-shot lead going into the weekend.

''Definitely shot my score on that back nine,'' said Kirk, who started the second round on the back. ''I made a pretty easy bogey on No. 10 and it was just kind of like, 'Yeah, this is going to be a pretty tough day.' But I didn't let it bug me.''

He followed with five birdies to get into the lead, and stayed there with a pair of saves – one for bogey on No. 4, another from a plugged lie in the bunker on No. 8.

Eighteen players had to return Saturday morning to finish the round, none closer to Kirk than three shots.

Even though he recently moved back to the Atlanta area, Kirk was one of the early PGA Tour pros to settle at Sea Island. This was one time where it paid off. The conditions were cold and blustery, with gusts up to 35 mph, and Kirk was ready for just about anything.

''I've played this course hundreds of times,'' he said. ''I've seen every wind direction, every wind strength. I've seen it blow way harder than that before. You still know how well you've got to play to shoot a good score, but at least there's no surprises.''

He missed his 3-wood ever so slightly into the wind at the start of his round and had to hit hybrid for his second shot. It's normally a 3-wood and a wedge.

''I guess that is a little bit of an advantage, just not being shocked by it all,'' he said.

Chappell had a few surprises, good and bad. He reached the par-5 15th hole in two and felt a gust helped blow his eagle putt into the hole. That was good. But on the par-3 third, aiming at a small tent well right of the green to cope with a strong right-to-left wind, he came up so short of the green that his ball disappeared into a hazard that Chappell didn't even know existed. That led to a double bogey.

''You hit some not-so-perfect shots and get some bad breaks with the wind gusting and you get exposed really quickly,'' Chappell said. ''I think I was fortunate to come to that realization that there's some luck involved today and that maybe for a period of time I was one of the luckier guys out here. But that tough stretch in the middle of the round I wasn't so lucky, and the law of averages, it averaged out.''

The law of averages was reflected in the scoring.

George McNeill finished off the fog-delayed first round Friday morning with an 8-under 62, when the course was soft and benign. It only made sense to Kirk that the lead going into the weekend was 8 under.

Simpson, who lost in a playoff at Sea Island in 2011, had a flawless round spoiled with a bogey from the bunker on the 17th hole. Even so, he was poised to go after his second win since this wraparound season began a month ago. Simpson already has won in Las Vegas.

The group at 6-under 134 included Jason Kokrak, who had the low score of the second round at 65. That included a birdie on the par-4 fifth hole, which wraps around a marsh. With the wind helping, the big-hitting Kokrak took a short cut toward the green and came up just short, setting up a chip-and-putt for birdie.

That was two shots worse than how he played the hole in a pro-am round. With a similar wind, he smashed his driver over the marsh, onto the green and into the hole for an albatross ace. Too bad it was only practice.

''I think it will play into my favor to play a little bit windy,'' Kokrak said. ''Maybe not quite as gusty and windy as it is today for the putting aspect, but 15 to 20 mph wind would be fine with me. I think it's an easier golf course for me to climb closer to the leaders with a little bit of wind as opposed to shooting 7 , 8 under par like the first round.''

McNeill struggled in the wind, making five straight bogeys on his way to a 76. He was six shots behind.

Kirk moved to Sea Island in 2007, among the early settlers of PGA Tour players, and he still keeps a place here. It's not a big problem being a local and having to deal with ticket requests. ''I'm probably the seventh- or eighth-best player on the island,'' he said with a laugh.

But he has been the best over two days, thanks to a mixture of solid shots and long birdies. Perhaps his best shot of the day came at the par-5 15th, when Kirk had a tree blocking his second shot to the green. He had to play a hook around the tree, not easy considering the wind was hard from left to right.

''I had to effectively hit a 30-, 35-yard hook just to get it around the tree and fight the wind,'' Kirk said. He would have taken the left bunker, but instead hit the shot into about 10 feet and two-putted for birdie.