Kirk rallies on back nine to win McGladrey Classic 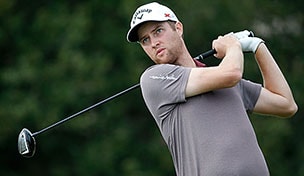 Getty Images
With #Dufnering going viral and Jason winning the PGA Championship, he and wife Amanda were thrust into the limelight in a big way this year. And thank goodness for it.  -

ST. SIMONS ISLAND, Ga. – Chris Kirk survived a wild back nine Sunday to win the McGladrey Classic, thanks to one big mistake by Briny Baird that kept him winless in 365 starts on the PGA Tour.

Kirk closed with a 4-under 66 for his second career win, though he received plenty of help from Baird. They were tied for the lead playing the 18th hole at Sea Island when Baird drove into a fairway bunker, the ball below his feet. He topped a 4-iron that went about 90 yards and into a hazard.

The victory sends Kirk to the Masters for the first time. He had been living at Sea Island for the last six years until moving back to Atlanta.

He had reason to exhale when it was over. Kirk made birdies on the 11th and 12th holes to build a two-shot lead, only to find himself trailing two holes later. Baird made a long birdie putt on the 13th, and Kirk hit into the hazard on the 14th and had to scramble for bogey.

Baird looked like the winner as they walked toward the green on the par-5 15th. He had 40 feet for eagle, while Kirk pulled his approach into the water left of the green, and slammed his wedge into the turf when his chip settled 20 feet away.

Baird ran his eagle attempt 4 feet by the cup and three-putted for par, while Kirk made his 20-foot par putt to stay one shot behind. Kirk caught him with a 15-foot birdie putt on the 17th, setting the stage for an 18th hole where the tournament was lost as much as it was won.

It was a crushing loss for Baird, who now has six runner-up finishes since the 41-year-old first joined the PGA Tour in 1999.

Baird has talked for years about how he would rather have a consistent year of top finishes and a trip to the Tour Championship than one win and no other tournaments in contention. Even this week, he spoke about golf being more about making money than winning trophies.

''It's not all about winning,'' Baird said Sunday after his finish. ''I've said that, but this hurts. This really does. This is very disappointing.''

The only consolation was how he finished after his topped shot into the hazard. Baird made a 25-foot bogey putt to share second place with Clark. That gave him $484,000, which secures his card for the rest of the season. Baird was exempt on a major medical extension from having surgery on both shoulders at the end of 2012.

Clark birdied his last three holes for a 62, the best score of the final round, and was on the practice range in case Kirk and Baird stumbled. Only one of them did.

Kirk finished at 14-under 266. It was the fourth straight year since the McGladrey Classic began that it was decided by one shot.