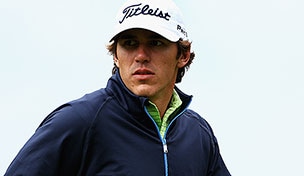 SAN MARTIN, Calif. – After a year spent traveling the world, Brooks Koepka suddenly is in a position to play a lot more golf at home.

In his first regular PGA Tour event, Koepka surged to the top of the leaderboard Friday in the Frys.com Open with a 7-under 64, giving him a one-shot lead over Jason Kokrak going into the weekend at CordeValle.

Kokrak, a runner-up at this event last year, hit 6-iron to the par-5 ninth to a foot for eagle and a 65.

Koepka, a 23-year-old Floridian, received a sponsor's exemption into the PGA Tour season opener between stops in Scotland and Shanghai. He had no status at the start of the year after failing to advance beyond the second stage of Q-school last year. Instead of trying to qualify for Web.com Tour events, Koepka packed his bags and passport for a 15-country journey that has served him well.

He won three times on the Challenge Tour to earn his European Tour card. He played the Dunhill Links in Scotland two weeks ago and in two weeks heads to the BMW Masters in Shanghai.

If he were to win the Frys.com Open, he would have a two-year exemption on the PGA Tour.

''There's no pressure. Just enjoying it right now,'' Koepka said. ''Looking forward to the weekend. I don't see any pressure. Yeah, it would be big. Obviously, be nice to win and get status over here. But you play good, everything kind of takes care of itself.''

It has so far – not just the last two days, but all year.

With no wind in the afternoon, the cut was at even-par 142. Because more than 78 players made the cut, there will be a 54-hole cut Saturday for the top 70 and ties.

Robert Garrigus (63) and Jim Herman (66) were two shots behind, while Camilo Villegas shot 66 and was another shot behind at 8-under 134. Kevin Tway, son of former PGA champion Bob Tway, had a 65 and was among those at 135. Lurking five shots behind were the Japanese duo of Hideki Matsuyama (66) and Ryo Ishikawa (67).

Koepka made most of his birdies with a wedge in his hand, and picked up two more birdies on the par 5s by missing eagle attempts from about 12 feet.

He was at the same course at Q-school where Jordan Spieth failed to advance. Spieth started out on the Web.com Tour, did well enough in his PGA Tour starts to get some money and momentum, and wound up with a win, a PGA Tour card, a trip to the Tour Championship and a spot on the Presidents Cup team.

Much like the European Tour, its developmental circuit goes all over the world. Like the time in Kenya that his driver turned a 15-minute trip into over three hours, stopping on side streets along the way and making Koepka more nervous than he has been behind the wheel of his luxury courtesy car at CordeValle this week.

Sure, he thought about how much more comfortable it would have been to try a Web.com Tour schedule mainly in America. But he wouldn't trade the experience.

''You're traveling the world at 23,'' Koepka said. ''That's good. And it's a good experience playing overseas. I think you'll see a lot more guys doing it. ... I think everybody wants to be a worldwide player. At least for me, that's what I want to be able to do – play the European Tour and the PGA Tour. I just need to get established over here a little bit more.''

The tournament is only halfway over, though Koepka is surely helped by having won four times in the last year on the Challenge Tour in Europe.

Herman also is on good form, though he can be excused if this doesn't feel like a PGA Tour opener. His offseason was one week. Herman played well late in the year but still didn't make it to the FedEx Cup playoffs. He played four of five weeks in the Web.com Tour Finals to earn his card back, and one week later, he was at CordeValle putting up rounds of 67-66 to assure himself a late tee time Saturday.

The low round Friday came from Andres Gonzalez, who also could use a big week.

Gonzalez thought he had his card wrapped up at the Web.com Tour Championship until Lee Williams made a 55-foot birdie putt on the last hole, and Andrew Loupe made a 5-foot par putt right behind him to knock Gonzalez out. He's only in the Frys.com Open because he finished in the top 10 in the previous PGA Tour event in August.

Gonzalez shot a 62 and was five shots out of the lead.