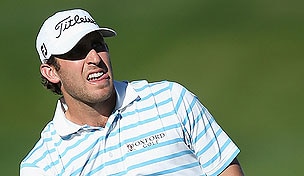 Getty Images
Dennis Walters' living-room wall is covered in pictures, and the largest ones are reserved for his dogs.  -

PEBBLE BEACH, Calif. – Andrew Loupe knows how one week can change everything. He can only hope his 8-under 63 in the AT&T Pebble Beach National Pro-Am is the start of another one.

Loupe had to wait three hours to tee off because of rain Thursday, and then he played bogey-free on the Shore Course at Monterey Peninsula. That gave him the lowest score among those who finished their rounds.

Rain soaked the Monterey Peninsula in the morning, which was great news for an area desperate for rain, not so much for the tournament. Puddles quickly formed on the greens at Pebble Beach and Spyglass Hill, forcing play to be stopped on all three courses.

Monterey Peninsula played the easiest, and Loupe took advantage. He never had to scramble for par, missed only one fairway and only two of his birdies were over 10 feet. This was his first trip to the area, and it was everything he imagined.

''This place is amazing,'' Loupe said with a smile as wide as a fairway.

The 25-year-old from Louisiana hasn't made the cut in five starts his rookie season. Loupe might not even have a PGA Tour card except for his tie for sixth in the last event of the Web.com Tour Finals. He had missed the cut in his previous three ''Finals'' event.

Stuart Appleby, Jim Renner, Richard Lee and Scott Gardiner had 65s at Monterey Peninsula. Phil Mickelson, a four-time champion, was at 5-under par through 15 holes when the round was stopped because of darkness.

Pebble Beach played the toughest, though the weather was not nearly bad enough to make that much of a difference with only a cool breeze and no rain the rest of the day. Jimmy Walker, already a two-time winner this season, got up-and-down for birdie on the 18th for a 66, the best score at Pebble.

Jordan Spieth, playing with country singer Jake Owen, had the best round at Spyglass Hill at 67. He picked up birdies on all but one of the par 5s, stuffed one close on the uphill second hold and escaped with par with a long pitch from short of the sixth green.

''It was more of an effort just to really play safe on the harder holes,'' Spieth said. ''The par 5s you can take advantage of out here. I three-putted the first par 5 for par, but bounced back on the other par 5s. And then I finally made some putts on the back nine. We picked a great day to have Spyglass.''

Dustin Johnson, a two-time winner of this event, had a 68 at Spyglass Hill playing with his future father-in-law, hockey great Wayne Gretzky.

Johnson had to work hard for his birdie on the ninth hole. His approach struck the pin and bounced back some 40 yards off the green. He chipped that in for his third straight birdie, and then picked up another birdie on the par-5 11th. He closed with seven pars for what he believes was his first bogey-free round at Spyglass.

Graeme McDowell, back at Pebble Beach for the first time since he won the 2010 U.S. Open, opened with a 71 at Spyglass Hill. He has to wait until Saturday to play Pebble Beach with his father, Kenny.

Defending champion Brandt Snedeker had a 72 at Spyglass Hill.

Loupe kept reminding everyone that his 63 was only one round, though it sounded as if he was reminding himself. He is thrilled to be on the PGA Tour, and it really hit him a few weeks ago at Torrey Pines when some of the biggest stars began showing up.

This wasn't the start he imagined, however – one round out of 11 that was under par, five weekends off. He wasn't about to panic, either.

''I really just stick to the plan and I know that my group is good. I have 100 percent trust in my swing coach, my family, my trainer,'' he said. ''I guess when you're in those ruts, I just kept telling myself, 'You're supposed to be here, you're going to play good, just keep playing.' This is just one round, guys, but I feel good.

''I did miss a few cuts coming into Sawgrass and played good,'' he said of the week that secured his card in the Web.com finals. ''And I just knew that I could do it again. Would I like to play more consistently? Yes. But I just want to keep this rolling.''

DIVOTS: Davis Love III was 2 over through 15 holes, but at least he had an amateur. Kelly Slater won the Volcom Pipe Pro 2014 on Wednesday at the Pipeline on the North Shore of Oahu, scoring a perfect 10 on one ride. He arrived at Pebble Beach about 5 a.m. Thursday. ... Ryder Cup captain Paul McGinley opened with a 67 at Pebble Beach. ... Jim Furyk, in his first PGA Tour event since September, opened with a 70 at Spyglass Hill. David Duval made his first start of the year and shot 72 at Pebble Beach.