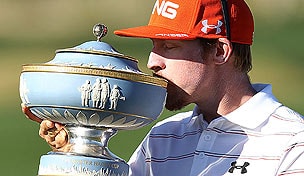 Mahan won four holes in a five-hole stretch starting with a 9-iron to 2 feet on the sixth hole, building a 4-up lead through 10 holes. Even as McIlroy threw his best stuff at him on the back nine, Mahan responded with two clutch birdies to stay in control.

Mahan won, 2 and 1, to capture his second World Golf Championship title. “He’s the best player in the world right now,” Mahan said. “I knew he’d made a charge, and he did.”

McIlroy defeated Lee Westwood in the semifinals Sunday morning, a high-stakes match because if either of them won the Match Play Championship, they would replace Luke Donald atop the world ranking.

Mahan made sure that didn’t happen this week.

He played 96 holes in his six matches and had 35 birdies on his scorecards. Mahan defeated Mark Wilson in his semifinal match - Wilson was his only opponent all week who had not played in a Ryder Cup or a Presidents Cup.

McIlroy, who made seven birdies in a 10-hole stretch Sunday morning to beat Westwood, couldn’t muster any magic in the afternoon. He missed a 4-foot par putt that would have won the opening hole, then fell behind with a series of mistakes.

On the seventh hole, with Mahan already in trouble in a deep collection area left of the green, McIlroy pulled his short iron and joined him there. But it took McIlroy two chips to get on the green, and he lost the hole with a double bogey.

Then McIlroy’s sand wedge hopped over the green on the par-5 eighth and he lost that hole with a bogey.

Mahan’s big lead was enough to withstand the McIlroy charge. The 22-year-old from Northern Ireland played the opening six holes on the back nine in 5-under par, but still picked up only one hole on Mahan.

“I tried to claw myself back, but I left myself too much work,” McIlroy said.

He also got off to a slow start against Westwood, 3 down through four holes, before roaring past him. McIlroy didn’t have the shots, and didn’t appear to have the energy, to do that twice in one day.

That was always his concern. There was so much anticipation about his semifinal match with Westwood.

“I knew that might be the toughest thing for me,” McIlroy said. “I knew that if I got through, I had to get myself up for the final. That’s not an excuse. He was solid as ever. He’s a deserving champion.”

The last time Mahan was in a pressure situation against a player from Northern Ireland was in the Ryder Cup at Celtic Manor, when U.S. Open champion Graeme McDowell made a 15-foot birdie putt on the 16th hole of the decisive match.

Even so, the memories of that match are Mahan duffing a chip on the last hole, even though McDowell was likely to win the match. Mahan has worked hard on his chipping, and he feels it carried him this week.

McIlroy won his first hole by chipping in for eagle from about 60 feet on the par-5 11th. Two holes later, McIlroy was safely in for birdie and Mahan had to get up-and-down from a bunker to avoid losing another hole. He blasted out to 6 feet and made the putt.

McIlroy birdied the 14th from 7 feet to cut the lead to 2 up, and on the 315-yard 15th, he hit driver to 30 feet for an eagle attempt. Mahan was short of the green, and elected to use his putter. He rolled it up the slope to tap-in range, and McIlroy missed.

Mahan likely goes to No. 9 in the world, the first time in his career he has been in the top 10. He earned $1.4 million for his fourth career victory, two of them WGC titles against the world’s best players.

In the most anticipated match of the week, Westwood birdied two holes and won another when McIlroy missed a 5-footer for par to build a 3-up lead through four holes. As quickly as Westwood took the lead, he lost it.

He made par to win the fifth hole, made a 30-foot birdie on the sixth, caught Westwood with a 15-foot birdie putt on the par-5 eighth, then took a 1-up lead to the back nine with a 5-foot birdie.

McIlroy holed a 25-foot birdie on the 12th to go 2 up, then seized control with a birdie on the 13th as Westwood was wild off the tee. His drive sailed left into the gallery, hit a woman in the back and the ball rolled down the inside of her sweater.

That might not have mattered the way McIlroy played. He closed him out on the 17th hole.

Mahan won the first two holes against Wilson and never trailed, though he didn’t take control until a birdie on the 15th hole.

In the consolation match, Wilson played the 18th hole for the first time all week and defeated Westwood, 1 up