Making Pebble cut is goal for many business titans PEBBLE BEACH, Calif. – For Ryan Palmer, with three PGA Tour wins and over $14 million in career earnings, it seemed like any other day at the office after he finished his third round at the AT&T Pebble Beach National Pro-Am.

For Brian Roberts, the CEO of Comcast with a net worth estimated at $1 billion, it was so much more than that.

He had a chance to make the cut.

''We're sitting in the Tap Room at Pebble Beach and here's Brian Roberts, basically the owner of Comcast worth I don't know how much,'' Palmer recalled. ''And I've never seen a guy more nervous. He was going back and forth and kept saying, 'Where do we stand?' He was nervous about making the cut. It was cool to see a guy like that who was so excited, really anxious to make the cut.''

Pebble Beach is celebrated for so many reasons.

It's played on one of the world's most picturesque courses on the first weekend after the Super Bowl, offering magnificent views of the Monterey Peninsula to golf fans still digging out from the snow. The amateur field is noted for a shrinking list of actors and entertainers and a growing list of athletes. Getting the least amount of recognition are the corporate executives, many of them in charge of Fortune 500 companies.

''They're the show – well, we are on Sunday,'' Geoff Ogilvy said. ''They're equally accomplished in their fields as we are in ours. But they do much more important stuff. We just entertain. They add to the economy.''

They're very successful. And they're very much out of their element at Pebble.

Bill Gross is the co-founder of Pacific Investment Management, the largest bond fund in the world which, according to Forbes, has $2 trillion under its management. There wouldn't seem to be a lot that could get him nervous.

Except maybe playing in the final round with Tiger Woods.

''We were both under the impression that our team had missed the cut by a shot, so Bill went to the airport,'' said Kevin Sutherland, his partner for the better part of a decade. ''He's talking to a friend who said, 'Where did you guys finish?' and Bill told him we were 22-under, or whatever we were, and missed by one. The guy says, 'No, I think that made the cut. If I were you I'd check.'

''He comes back from the airport, and the next day we're playing with Tiger,'' Sutherland said. ''He was noticeably jittery, almost shaking. I found that odd, that you deal with billions of dollars but you're nervous playing with Tiger.''

This is not the boardroom or a playoff game or a concert before 80,000 fans. These amateurs are playing golf. For one week, they are living the life of a PGA Tour player. It's a different stage. It's a blast. And it can be a little overwhelming at times.

''It's their Masters,'' Brad Faxon said.

Palmer had a better understanding a few years ago when the Tour asked him and Jason Bohn to play with a couple of VIPs. One was Roberts, whose company owns Golf Channel and NBC. The other was Mike Glenn, executive vice president of market development for FedEx, which at the time was negotiating an extension of the FedEx Cup.

''Two of the biggest check-writers in our business,'' Palmer said.

The Tour didn't pick two of its biggest stars for two important clients, rather two players who understand what Pebble is all about. Bohn emailed them to arrange a practice round on Wednesday (rare unless the pros and amateurs are longtime friends), and they hit it off. Palmer and Bohn decided to splurge on a bottle of Caymus Special Selection if either of them shot 65 in the second round. Neither did. The next morning, a magnum was waiting for them on the first tee – a gift from Roberts.

Peter Jacobsen considers Pebble as important event as any all year.

''This combines all the elements we're looking for when it comes to the PGA Tour – corporate involvement, amateur involvement, celebrity and fan interaction,'' he once said. ''It's a combination of good fun and good golf.''

The celebrities are easy to spot. Some of the CEOs don't get as much TV time, though they might be having more fun.

''There's one group called the 'Cut-Makers Dinner,' where a bunch of these guys go out to dinner and people who made the cut have to pay,'' Faxon said. ''They've made this into a big deal. It's a prestigious thing to pay for that dinner.''

One executive is said to have tipped his pro's caddie $25,000 after winning the pro-am. It means that much to them.

Faxon shared the pro-am title in 2003 with Tom Ryan, the former chief executive of CVS/Caremark Corp. Ryan received a crystal set. Far more important, Ryan's name is permanently on the rock near the first tee with the rest of the amateur winners.

Faxon didn't appreciate how much it meant to the head of CVS until a few months later back home in Rhode Island.

''Later on that summer, Tom invites Dory (Faxon's wife) and I to the Black Pearl in Newport,'' he said. ''We get there and he had the 45-piece crystal set on the bar and he was offering drinks to buddies who walked by.'' 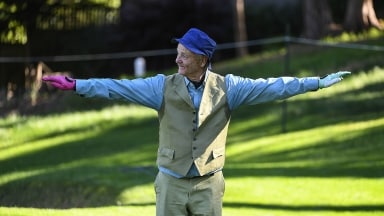 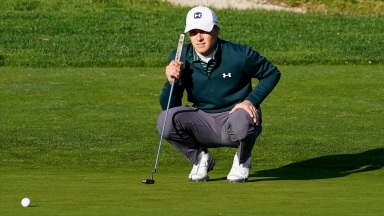 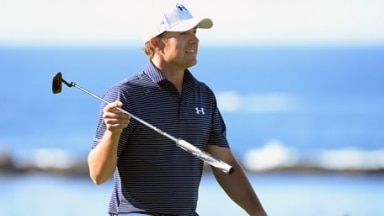