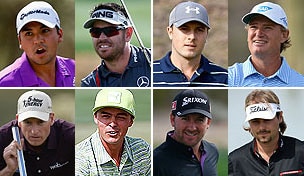 MARANA, Ariz. - Not even Graeme McDowell can believe he's still alive in the Match Play Championship.

Right when it looked as though he used up all his magic, McDowell pulled off another improbable escape Friday to advance to the quarterfinals at Dove Mountain. This time, all he had to do was win the last two holes to force overtime, make a 20-foot par putt to extend the match, and then win it with a birdie on the 21st hole.

''Nine lives have been used up, and then some,'' McDowell said.

He again provided plenty of drama on a warm afternoon filled with it.

Sergio Garcia bizarrely conceded an 18-foot par putt to Rickie Fowler on the seventh hole because he felt bad about taking so long on a drop away from bees on the previous hole. Fowler wound up getting back in the match with three straight birdies, and winning with a birdie on the 18th.

Jim Furyk, who played college golf at Arizona, rallied from 3 down on the front nine to beat Harris English.

Ernie Els hit a magnificent shot into the 18th hole for a birdie to knock off his second major champion in two days - Justin Rose on Thursday, Jason Dufner on Friday. Next up is Jordan Spieth, the 20-year-old Texan who took out defending champion Matt Kuchar.

The others advancing to the quarterfinals were Jason Day (3 and 1 over George Coetzee); Louis Oosthuizen had the best round, 6 under through 14 holes in beating Webb Simpson; and Victor Dubuisson of France won the first two holes and held on to beat Bubba Watson.

Perhaps it is only fitting that McDowell next plays Dubuisson.

McDowell has never led in any match until the last hole. Dubuisson has never trailed in his three matches.

The only player who had a more unlikely run to the quarterfinals in the 16-year history of the Accenture Match Play Championship was Geoff Ogilvy at La Costa in 2006. In his opening four matches, he watched 10 times as his opponent had a putt to win the match. Ogilvy went on to win the tournament.

No other player, however, has been in a more precarious spot than McDowell for three straight days.

He was 3 down to Gary Woodland with three holes to play when he won the next three holes, and then beat him with a birdie on the 19th hole. He was 2 down with four holes to play against Hideki Matsuyama when he won two holes, made a 10-foot par to halve another, and won the 18th with a par.

It bordered on ridiculous against Mahan, who had a 16-4 record on this golf course. Unlike the opening two days, McDowell actually had a chance to take the lead with birdie chances on the eighth, ninth and 10th holes. Mahan went ahead with a birdie on the 11th, prompting McDowell to say, ''I'm allergic to 1 up.''

He's used to being down, especially late in the match.

Mahan pitched to 3 feet for birdie on the 15th, and he won the 16th when McDowell three-putted for bogey. Both players drove into the rough on the 17th, both came up short in the bunker. McDowell had 10 feet for par, Mahan was inside of that by a few feet.

McDowell's par putt just curled into the left side of the cup, and he slammed his putter into the bag. ''Where has that been all day?'' he said. His cap was removed when Mahan's putt slid by, and off they went to the 18th. McDowell's approach caught the ridge, and he made the 6-foot birdie for overtime.

Surely, his luck figured to run out on the 20th hole, the par-4 ninth, when his 3-wood caught a deep bunker and left him no shot at the green. McDowell hit 9-iron to get over the lip and barely cleared the desert, and his third shot settled 20 feet away. He made that for par, one more hole.

And then it was over.

How crazy is this run? McDowell has yet to hit a tee shot over 58 holes in which he was leading.

Furyk finally made it to the quarterfinals in his 14th appearance at this World Golf Championship. Spieth got there in his first try, overcoming an early deficit with consecutive birdies and making fewer mistakes than Kuchar, who had a 17-3 record in this fickle format. Spieth was credited with 10 birdies.

Spieth next plays Els, who has been credited with only nine birdies all week. But the Big Easy is playing to the level of competition. He's winning. That's all that is required.

''I know that he hasn't played his best golf yet this week, so I'm sure it will come tomorrow,'' Spieth said. ''And I've got to be prepared for it.''