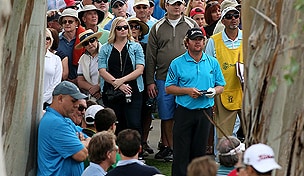 Getty Images
Hideki Matsuyama of Japan lines up a putt on the 16th green with his caddie Daisuke Shindo during the second round of the 144th Open Championship at The Old Course on July 18, 2015 in St Andrews, Scotland. (Photo by Ross Kinnaird/R&A/R&A via Getty Images)  -

LOS ANGELES – A city known for its star power has a PGA Tour event filled with fairy tales off Sunset Boulevard.

Start with William McGirt, who ran off eight birdies in 13 holes at Riviera on his way to a 6-under 65 on Saturday to build a two-shot lead in the Northern Trust Open. Going into his fourth full season, McGirt has never won on the PGA Tour. His last victory was on the eGolf Tour in the Carolinas, where the $16,000 winner's check paid off his credit cards. Asked to name the mini-tours he played, McGirt said he would run out of fingers and toes counting them.

''When you're around mini-tours for eight years and go through a bunch of heartaches at Q-school, once you finally get here, you really have to appreciate it,'' he said.

McNeill was working in a pro shop until giving the Tour one last shot, and it already has produced two wins, though neither was enough to get into the Masters. Beljan lost in a playoff at Riviera last year. He is best known for being wheeled off the course at Disney on a stretcher because of a panic attack, and winning two days later.

And then there's Jason Allred.

He hasn't played a PGA Tour event since qualifying for the 2010 U.S. Open at Pebble Beach. His wife is due with their third child at the end of the month, so Allred came over to try to Monday qualify. After opening with a 73, he followed with a 64 on Friday and a 67 on Saturday and now is just three shots behind.

A victory would give him a two-year exemption, trips to the Masters and PGA Championship, Kapalua and Bay Hill and the Memorial and Firestone, even Shanghai.

He got choked up talking about support from his wife and the treat to be able to have a week like this.

''Making the putt on 18 is probably the most excitement I felt from the crowd ever in my career,'' said Allred, who holed a 10-footer on the final hole. ''I can't tell you how much it means to me to be able to be at a place in my life. I just have so much to be thankful for with my amazing family. It just feels great to be out here and soak it up.''

One of them could emerge a big winner Sunday, though there are plenty of stars right behind them.

The leaderboard at times was more crowded than the 405, which has been reduced to two lanes this weekend because of construction, causing traffic that is bad even by LA standards. When the third round ended, 15 players were within five shots of the lead.

That's not much at Riviera, on Sunday, chasing someone who has never had a 54-hole lead on the PGA Tour.

The group at 8-under 205 featured Jordan Spieth (67), Dustin Johnson (69) and Jimmy Walker (67), who is going for his fourth win of the season after winning last week in the AT&T Pebble Beach National Pro-am. Also in that group were a pair of Masters champions, Bubba Watson (64) and Charl Schwartzel (68).

Behind them were a pair of former champions at Riviera, Bill Haas and Aaron Baddeley.

''I've just got to go play my game tomorrow and hope that it's good enough,'' McGirt said.

McGirt held up nicely the last time he had a chance like this. He was in the last group at the 2010 Canadian Open, one shot out of the lead, and stayed near the lead all round until making bogey on the tough 18th hole at Hamilton Golf and Country Club to finish one shot behind Scott Piercy.

The 34-year-old from South Carolina has much at stake Sunday. McGirt has played in only one major, the PGA Championship two years ago. He hasn't won a proper event in nearly seven years, and even his one claim-to-fame comes with a caveat. McGirt made two aces in one round at a charity event, the second one worth a car.

Turns out the event failed to pay for insurance in case a professional made the hole-in-one. McGirt received a weedwacker shaped like a golf club, instead.

McGirt is among four players from the top 12 who have never won on Tour. The others are Brian Harman, who had a 68 and was three shots behind, Cameron Tringale, who had a 67 and was in the group four shots behind, and Allred.

This week already has been more than Allred could have dreamed, and he dreams a lot.

''I need to be honest, it's totally blown them out of the water,'' he said of his expectations. ''But also to be honest, even when I go out to practice, whether it's to prepare for a gate way tournament or this week, I still have that belief in me that I have in me to win big golf tournaments. At times, even I have a hard time believing that over the years, but it sure is fun to be out here and be able to have a chance.''