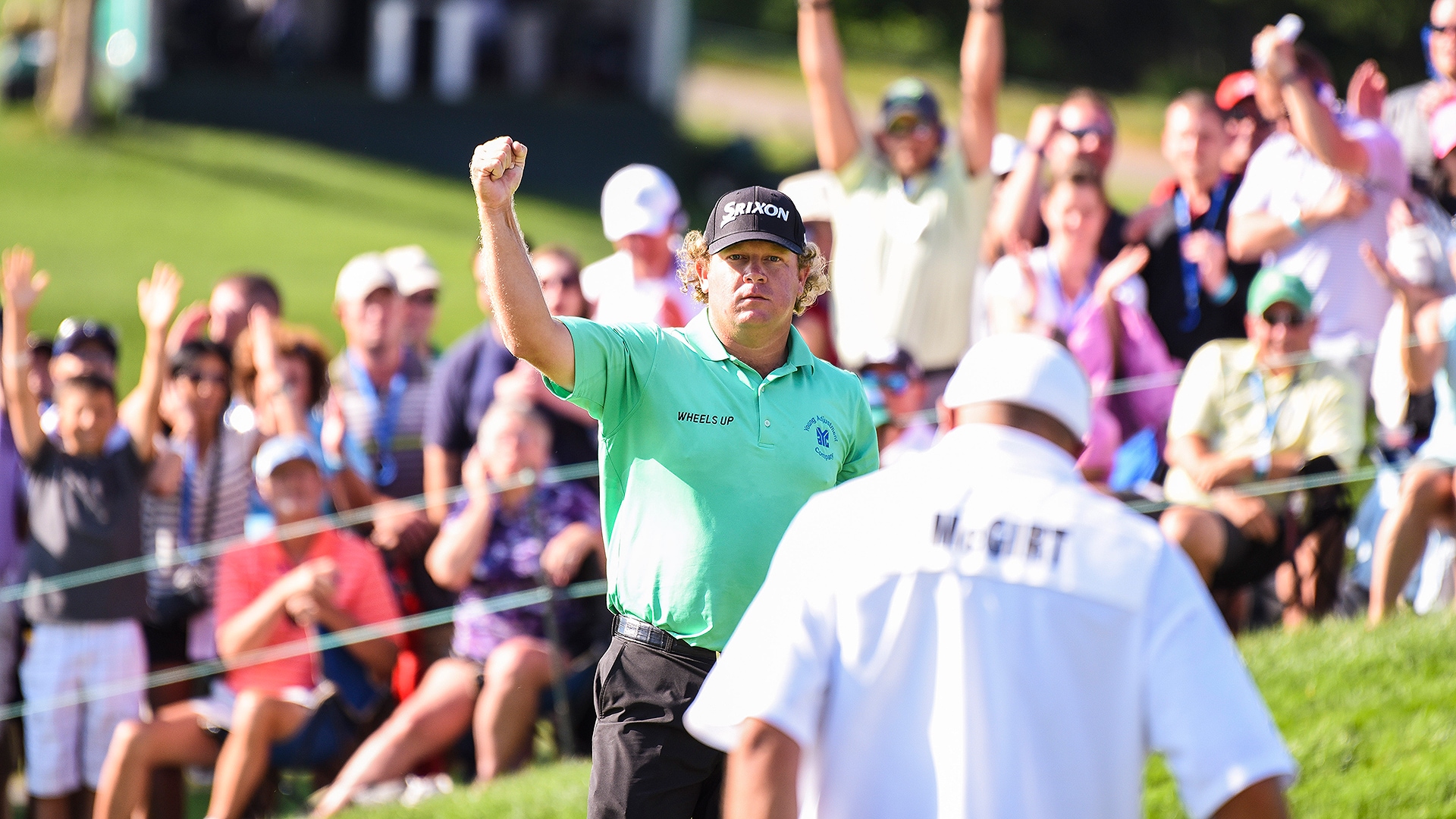 DUBLIN, Ohio - William McGirt thought he hit it big when he won the Cabarrus Classic and pocketed $16,000, the second-largest prize on the Tar Heel Tour.

That was in 2007, and it felt like a lifetime ago compared with the perks from winning the Memorial on Sunday.

The victory was worth $1.53 million and a three-year exemption for a guy who once dreamed of simply having a PGA Tour card.

Waiting to congratulate him was tournament host Jack Nicklaus, who raved about the bunker shot on the 18th hole that kept McGirt in the playoff at Muirfield Village, and the flop shot from behind the 18th green that led to a 6-foot putt and his first PGA Tour victory in his 165th try.

McGirt moves up to No. 43 in the world and was assured a spot in his first national championship.

''It will all sink in at some point,'' McGirt said.

This was a long time coming.

McGirt couldn't count all the mini-tours he played and the self-doubts he ignored, including a four-month stretch in which he saw his wife for only four days. But on Sunday against the strongest field of the year for a regular PGA Tour event, McGirt made his first victory one to remember.

He played the final 22 holes at Muirfield Village without a bogey. His final par in regulation was the most important, a two-putt from 65 feet for a 1-under 71 that allowed him to join Jon Curran (70) in a playoff at 15-under 273.

McGirt won the way Nicklaus said he captured so many of his 73 times on the PGA Tour.

Dustin Johnson dropped three shots in four holes to start the back nine, and a fourth bogey on the 16th ended it for him. Matt Kuchar was tied for the lead when he returned from a 90-minute rain delay and promptly hit the lip of a fairway bunker and made double bogey. He never recovered. Emiliano Grillo had a share of the lead until starting the back nine with four straight bogeys. Gary Woodland couldn't get up and down behind the 17th green and made bogey.

Curran, who knows Nicklaus from being a member at his Bear's Club in South Florida, looked like a winner when he hit 7-iron out of a fairway bunker on the 17th hole to 7 feet for birdie to join McGirt at 15 under. McGirt was battling his swing and trying to hang on. He saved par from a bunker on the 17th. He had the long two-putt for par on the 18th hole. And he was in trouble on the 18th in a playoff, facing a deep bunker shot to a back pin.

He expertly used the slope behind the hole and watched his shot roll back to a few feet to stay alive.

''That was a long bunker shot,'' Nicklaus said.

Playing the 18th for the third time, Curran misjudged the strong wind at his back and went into the gallery above the green, and his pitch ran down the slope well past the hole, leading to bogey. McGirt also went long and played a perfect flop shot to 6 feet for the winner.

''Surprisingly, I felt no nerves standing over that putt and poured it right in the middle,'' McGirt said.

Jason Day, a Muirfield Village member and No. 1 in the world, got to within two shots of the lead until he tumbled to a 74 and tied for 27th, matching his best result at the Memorial. Jordan Spieth shot 73 and finished 12 shots behind in a tie for 57th.

In his 12 years as a pro, he has played only one major, the 2012 PGA Championship. That was meaningful, even though he missed the cut, because he was coming off a close call at the Canadian Open in which he didn't look at the leaderboard the final round. He ran into Tiger Woods, told him what he did, and he said Woods told him he was foolish for not looking. McGirt didn't make that mistake twice.

And when it was over, his name was at the top.

The U.S. Open is now on his schedule. So is the PGA Championship at the end of July, and the Masters next April.

''I wondered for years if I would ever get to the PGA Tour,'' McGirt said. ''And then once you get out here, OK, you've played 160 events. Are you ever going to win? But I think you have to get your nose bloodied some to learn how to handle it, and I definitely had my nose bloodied a few times.''