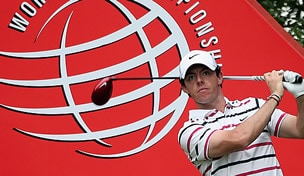 Getty Images
Hideki Matsuyama of Japan at the tee box at the eight hole during round one of the Frys.com Open at the CordeValle Golf Club on October 10, 2013 in San Martin, California. (Photo by Robert Laberge/Getty Images)  -

SHANGHAI – The graceful combination of power and balance. The bounce in his step after every birdie. His name at the top of the leaderboard. For at least one round, Rory McIlroy finally looked like the former No. 1 player in the world instead of a guy who hasn't won a tournament all year.

With eight birdies and hardly any stress, McIlroy opened the HSBC Champions on Thursday with a 7-under 65 for a two-shot lead over Gonzalo Fernandez-Castano and Jamie Donaldson. It was the first time since he won in Dubai last November that McIlroy has been in the outright lead after any round.

''It felt good to be out there and in control of my golf ball,'' McIlroy said.

Maybe it was just a coincidence that McIlroy's only win of any variety was earlier this week at Mission Hills when he rallied to beat Tiger Woods in an 18-hole exhibition. That didn't hurt his confidence, though the 24-year-old from Northern Ireland pointed to other factors that have been leading him in this direction.

He took a four-week break, spending most of that time in Northern Ireland with swing coach Michael Bannon and ''getting back to what we used to do.'' He has a new driver and a golf ball that is softer, giving him more spin around the greens.

And perhaps most importantly, he hasn't lost his mind or his patience during the most difficult season of his young career.

''It's obviously frustrating when you've had a couple of seasons previous where you've had success, and not being able to emulate that,'' he said. ''The way I look at it, if I have a 25-year career, nine months isn't actually that long. I wouldn't say 'restless,' but obviously there's a point in time where you're thinking to yourself, 'Right, come on, let's get this back on track.' But I've tried to stay as patient as possible.''

More patience is required against a strong field at Sheshan International for this World Golf Championship.

Fernandez-Castano is coming off his first win of the year last week at the BMW Masters. The group at 4-under 68 included U.S. Open champion Justin Rose, former Masters champion Bubba Watson and 20-year-old Jordan Spieth, playing as though last season never ended. Another shot behind were Dustin Johnson, Paul Casey and Graeme McDowell, who remains second on the European Tour money list with hopes of catching Henrik Stenson.

The timing was crucial for McIlroy.

Not only has he failed to win a tournament, he is at No. 62 in the Race to Dubai with only two tournaments remaining to get into the top 60 and qualify for the season-ending World Tour Championship in Dubai. McIlroy won the money title a year ago.

''It's only 18 holes. It's only one round of golf,'' McIlroy said. ''But it's definitely the way I wanted and needed to start, keeping in mind that I obviously want to play myself into Dubai and try to pick up my first win of the season, as well.''

British Open champion Phil Mickelson had a chance to join McIlroy in the lead until it all went wrong. One shot behind with two holes to play, Mickelson hit two wedges into the water fronting the par-5 eighth green and took a quadruple-bogey 9. His second wedge landed some 30 feet beyond the pin and had so much spin that it raced off the green and down the bank into the water.

He hit another shot into the water on No. 9, and followed that with a brave shot to 2 feet to escape with only a bogey. He fell back to a 71.

Spieth, who went from no status at the start of the year to a spot in the Presidents Cup and No. 20 in the world, didn't arrive until Monday and has been battling jet lag this week after his first trip to China. He was 2-over through eight holes, and then played 6-under the rest of the way, as if last season never ended.

''I didn't really know what to expect out of the game this week, traveling over here and limited practice,'' he said. ''But maybe it was good for me. My caddie helped me stay calm and stay positive, and once the putts started going in, we were just in our normal routine.''

But this day ultimately was about McIlroy.

''It's just learning from each week and just trying to put the pieces together,'' McIlroy said. ''A little bit of confidence from Monday, of course, but I think it was these two previous weeks just getting back into competitive play and learning what I needed to do to improve and sort of work on those things coming into this week.''