McIlroy rolls to victory at the BMW 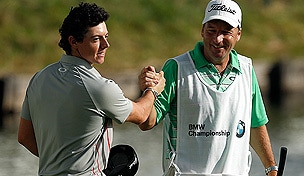 CARMEL, Ind. – Rory McIlroy faced the strongest collection of contenders at any golf tournament this year Sunday at the BMW Championship.

It was no contest.

Even more disconcerting for everyone else, Boy Wonder was expecting to win all along.

McIlroy fine-tuned his swing and missed only one fairway at soggy Crooked Stick, powering his way to a 5-under 67 to win his second straight FedEx Cup playoff event. They followed a record win at the PGA Championship, giving him three wins in his last four starts to establish himself as the dominant player in golf.

He became the first player since Tiger Woods in 2009 to win in consecutive weeks on the PGA Tour, and with his sixth career Tour win, he joined Woods and Jack Nicklaus as the only players to win that many at age 23.

''The more you put yourself in this position, and the more you win and the more you pick up trophies, it becomes normal,'' McIlroy said after his two-shot win over Phil Mickelson and Lee Westwood. ''And it feels like this is what you're supposed to do.''

For the longest time, this was what Woods used to do.

''I don't think I'm quite there yet,'' McIlroy said. ''But I'm getting to that stage where I'm thinking, 'This is what I should be doing. I should be lifting a trophy at the end of the week.' It's been great. The last four, five weeks have been incredible, some of the best golf that I've ever played. I'm going to try and keep the run going for as long as possible.''

Never mind that Phil Mickelson and Vijay Singh – Hall of Famers with 74 Tour wins and seven majors between them – were one shot ahead. Or that Lee Westwood, a former world No. 1, was playing alongside. Or that Woods was right behind.

McIlroy made back-to-back birdies around the turn to emerge from a four-way tie, and he turned back one last challenge from Westwood and Mickelson with clutch pars. The 23-year-old from Northern Ireland didn't make a bogey until the 18th hole.

Mickelson and Westwood tried to chase him down on the back nine at Crooked Stick, only to make mistakes when they couldn't afford any.

Westwood, who lost to McIlroy in the semifinals of the Match Play Championship in February, caught him with a birdie on the par-3 13th. But the weak area of his game showed up at the wrong time – a poor chip on the 14th for bogey, another pedestrian chip on the par-5 15th that led to par. He wound up with a 69.

''I played with him when he was 13, and you could see it then,'' Westwood said. ''He's just maturing all the time, as he will do. And he's a very, very good player.

Mickelson, tied for the lead going into the final round, was one shot behind when his approach flew the green on No. 12 and he had to scramble for bogey. Mickelson made back-to-back birdies late in the round to get within two shots of the lead, but he badly missed a 3-foot par putt on the 17th to fall three shots behind. He closed with a 70.

''A lot of people stayed neutral and Rory geared ahead,'' Mickelson said.

Woods was never seriously in the mix. Five shots behind with seven holes to play, he made three late birdies and shot 68 to tie for fourth with Robert Garrigus (69).

McIlroy's work is not done.

He is the No. 1 seed going into the FedEx Cup finale in two weeks at East Lake, but any of the top five seeds can win The TOUR Championship and capture the FedEx Cup with its $10 million bonus. The other four seeds are Woods, Nick Watney, Mickelson and Brandt Snedeker.

''Rory is putting on a show out there,'' Woods said. ''And we've got one more tournament.''

Any of the top 30 players who advanced to the Tour Championship have a mathematical shot at winning the $10 million prize. One guy who won't have that opportunity is Vijay Singh, who started the final round tied for the lead with Mickelson. The 49-year-old Fijian fell apart on the back nine with three bogeys in a four-hole stretch to fall out of the top 30. A birdie on the final hole gave Singh a 73, but by then it was too late.

McIlroy finished on 20-under 268 and earned $1.44 million, pushing him to over $7.8 million for the season to effectively lock up the money title and all but assured being voted by his peers as the PGA Tour player of the year.

He has four wins on Tour this year – one more than Woods – and that includes a record eight-shot win at the PGA Championship.

This doesn't rate as highly as winning a major at Kiawah Island, though the All-Star cast that he beat made it satisfying – Mickelson, Singh, Westwood, Woods, Dustin Johnson and Adam Scott all were within range of the lead going into the final day.

McIlroy not only beat them all, he managed to take the drama out of the final hour with a towering 4-iron from 226 yards that landed softly and set up a two-putt birdie from 15 feet on the 15th. He followed that with another birdie putt from just inside 15 feet on the next hole to build a three-shot lead.

''He's going out there and is up near the lead and posts a good number,'' Woods said. ''He's doing the things he needs to do, and as he said yesterday, he's feeling very confident about his game. Right now he's just really played well, and he's making a ton of putts. That's a great combo.''

The 70-man field was whittled to 30 for the Tour Championship. Singh's late collapse enabled Scott Piercy to grab the final spot, despite a double bogey on the 14th hole and a bogey on the 18th for a 68. A day earlier, Piercy had a two-shot penalty for removing an out-of-bounds stake on the 14th hole.

But he's in the Tour Championship, which puts him in all the majors next year.

Bill Haas suffered another Sunday meltdown at the BMW Championship, and this time it cost him. He was No. 28 in the FedEx Cup and started the final day in reasonable shape. He made seven bogeys and a double bogey and closed with a 78, falling out of the top 30 to miss the Tour Championship.

A year ago, Haas closed with a 78 at Cog Hill to lose an automatic spot on the Presidents Cup team. But he made it to East Lake, won the Tour Championship to capture the FedEx Cup and the $10 million bonus, and was picked for the Presidents Cup team, anyway. There is no second chance this time, adding to the biggest oddity of this series. For the sixth straight year, the reigning FedEx Cup champion will not be at the Tour Championship.

''When nerves are an issue and under the gun, I've got to be better,'' Haas said. ''And right now, I'm far from competitive.''

Haas wasn't alone in his heartache.

Mickelson set the tone for this wild day when he pushed his opening drive so badly that he started to hit a provisional ball when he realized it clattered off the trees and back into the fairway, just 200 yards off the tee, though he safely managed a par. Then, he holed out from just over 40 feet off the green at No. 2 to take the lead, and kept a slim margin with a nifty up-and-down at the par-5 fifth.

But when he missed the green from the fairway on No. 7 and made bogey, the final round was wide open.

Ahead of him, Johnson chipped in for eagle on the par-5 ninth to create a four-way tie for the lead with Mickelson, McIlroy and Westwood.

Westwood made birdie from the bunker on the ninth, while McIlroy hit a sky-high 4-iron that landed softly and set up a two-putt birdie that put them ahead at 18 under. Mickelson, playing in the final group, ran a chip out of muddied grass to 12 feet and made birdie to join them.

McIlroy stuffed his approach into 5 feet for birdie on the 10th, and he never trailed again.