McIlroy within reach of Honda win, world No. 1 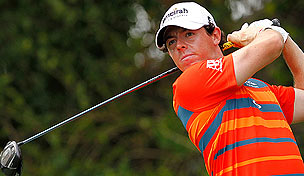 PALM BEACH GARDENS, Fla. - Rory McIlroy is one round away from No. 1 in the world.

McIlroy made two big par saves Saturday on a windy back nine at PGA National and finished with a birdie from the bunker for a 4-under 66, giving him a two-shot lead over Harris English and Tom Gillis in the Honda Classic.

McIlroy was in a similar position a week ago when he reached the final of the Match Play Championship—win and the 22-year-old from Northern Ireland becomes the second-youngest player behind Tiger Woods to be No. 1 in the world.

Only this time, there is more than one player to contend with in the final round. Five players were within four shots of the lead, a group that includes PGA champion Keegan Bradley.

“I wasn’t standing up 2 up on the first tee in the final,” McIlroy said, smiling.

The group does not include Woods. He finally made a few putts, but not nearly enough to keep pace with everyone else. Woods went the last 11 holes without a birdie and had to settle for a 69, leaving him nine shots behind.

English, the 22-year-old rookie who won on the Nationwide Tour last year while still an amateur, made a 10-foot par save on the 17th and finished with a 66. He will be in the final group with McIlroy, a rare time when the U.S. Open champion will be playing with someone his own age with a tournament on the line.

They will be joined by Gillis, a 43-year-old journeyman who turned pro a year after McIlroy and English were born. Gillis had the lead to himself on the back nine until a bogey on the par-3 15th. He had a 69.

“It’s nice to have the lead going into tomorrow,” he said. “I have to try to focus on what I’ve been trying to do all week, which is hit fairways and hit greens and stay in the present, and not think about everything that could happen.

“I’ve just got to go out there and try to put a good number on the board.”

The wind was at its strongest, though not too severe and the tees were moved forward on the par 3s over the water because of the dangerous front hole locations.

That’s where McIlroy was at his best.

He hit 8-iron at the middle of the green on No. 5 with a draw that held up against the wind to 10 feet and made one of only 10 birdies on the day. On the 15th hole, the start of PGA National’s famous finish, McIlroy hit 9-iron to just outside 5 feet, the closest anyone got in the third round.

There also was a bonus birdie on the par-4 11th, with water in front of the green. McIlroy was in mangled rough to the right, and the safe route was to play short and left of the green to avoid a big number. He blasted a 7-iron from 181 yards to the back fringe, and then holed a 50-foot putt. NBC Sports reporter Roger Maltbie walked by on the way to the 12th tee and said to him, “Really?”

McIlroy tried to contain a smile under his cap and curly brown hair.

Even so, his two key shots were for par. From the right rough on the 13th, the best he could manage was to hit into a front bunker, some 30 yards short of the flag. McIlroy nearly holed the shot to escape with par, and then he made an 8-footer for par on the next hole.

“They were two crucial holes today,” he said.

English is showing that his win last summer on the Nationwide Tour was not an accident. He breezed through Q-school in December and has yet to miss a cut all year, though he has not finished better than a tie for 15th in the Phoenix Open.

Even so, he is polished and looks capable of winning, even against a player whom everyone is ready to crown as No. 1. English is among them, smiling when asked about playing a 22-year-old on the verge of going atop the world ranking.

“Rory is awesome,” English said. “I haven’t had a chance to meet him yet, but I’ve definitely watched him play the last couple of years. He’s got a great game and he deserves. I think he’s the best player in the world right now, hands down, and I’m looking forward to tomorrow. He’s very impressive.”

Bradley had a 68 and was in the group at 7-under 203 with Brian Harman (69) and Justin Rose (71). Masters champion Charl Schwartzel wasted a good start with a double bogey on the 11th hole, but still had a 67 and was five shots behind.

The best Woods looked came early in his round, when he birdied the third hole from 7 feet, holed a 20-footer on the fourth for birdie, made a 15-foot par save on the sixth and stuffed his tee shot on the seventh into 4 feet.

That was his last birdie, though.

“I was close to putting a low one up there today,” Woods said. “I felt like it could be had, I could make a run and post 5-under par for the day or something like that and get myself within reach. Right now, Rory is playing some great golf.”

Starting times have been moved up for the final round because of storms in the forecast, meaning players will be in threesomes. Gillis could only laugh at the notion of a journeyman being in the last group with a pair of kids.

“Hopefully, they don’t walk too fast and I can catch up to them,” Gillis said.

Behind that self-deprecating humor, developed from toiling in 26 countries in a hardscrabble career, is a guy who has been around too long to be intimidated by much, even someone of McIlroy’s ability.

Gillis dropped only one shot, going over the back of the par-3 15th and into the bunker, with his next shot stopped a few feet from going into the water. Otherwise, he was steady.

“I wish I could have got a couple out at the end to get a little closer to Rory,” Gillis said. “He’s not the type of guy you want to spot two shots to. But anything can happen on this golf course—anything. So we’ll just add them up tomorrow.”