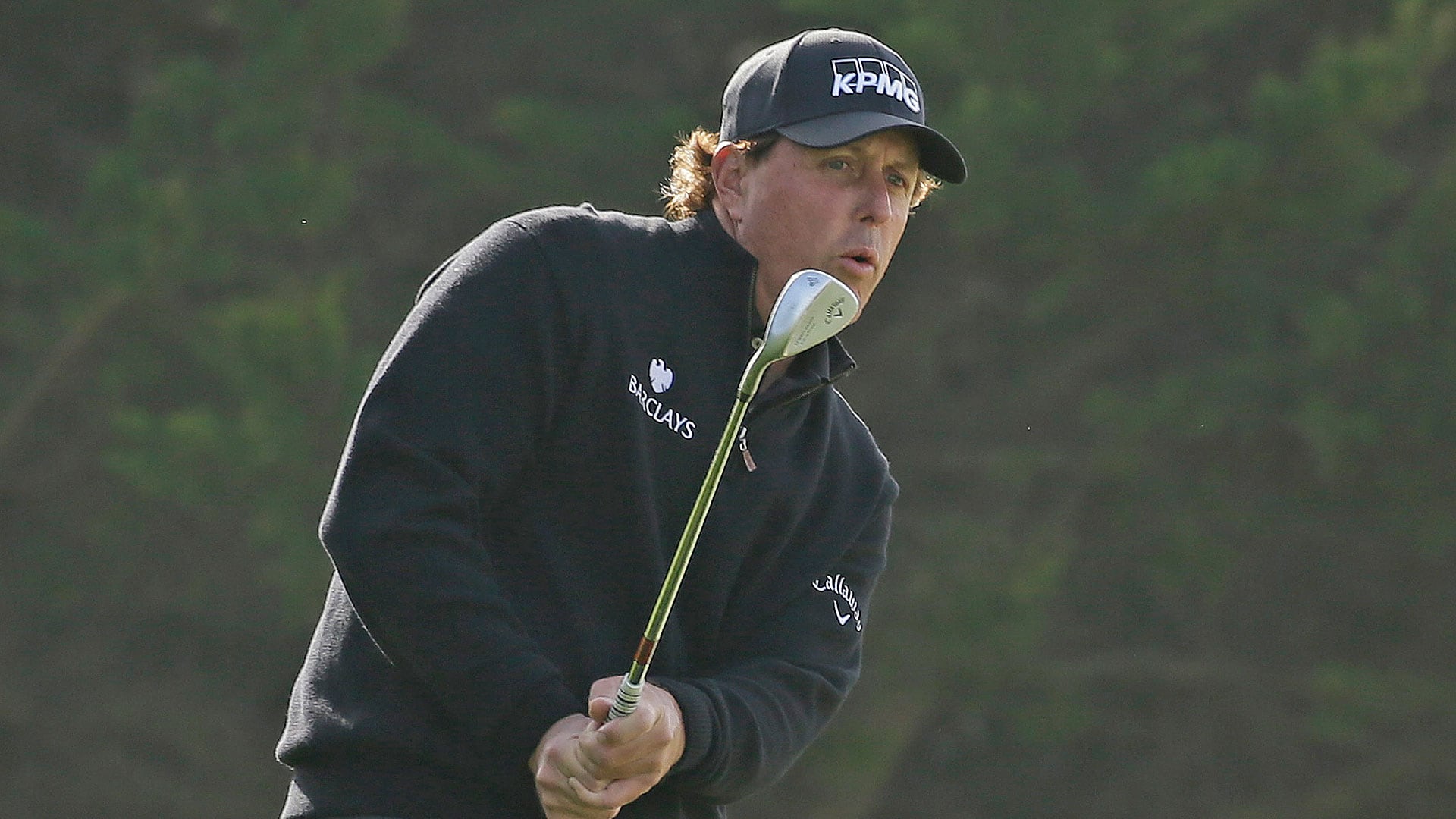 PEBBLE BEACH, Calif. - Sunghoon Kang didn't know anything about his amateur partner until he went on the Internet and looked up actor Ray Romano. He didn't realize the par at Monterey Peninsula was 71 until he scrambled for par on his final hole and realized while signing his card Friday that he set the course record with a career-low 60.

It added to a memorable day at the AT&T Pebble Beach Pro-Am, where Kang and Hiroshi Iwata of Japan wound up tied for the lead.

Kang and Phil Mickelson each brought the possibility of 59 into the conversation - one early in his round, the other late.

Mickelson took only 11 putts on the front nine at Monterey Peninsula. When he made a 40-foot eagle putt on the 10th hole, he was 7 under for the round and had a pair of par 5s remaining over his last eight holes.

He made bogey on one of the par 5s, hooking his fairway metal into shrubs and having to reach into the thick plants with a hybrid to punch out the ball and make sure it only went about 6 feet so that it wouldn't go up the slope and roll back into the bushes. Lefty usually doesn't hit great shots that go 6 feet unless he has a putter.

Then, he nearly lost his tee shot on the final hole and made another bogey for a 65, leaving him one shot behind.

''I thought I was going to shoot a lot lower than I did,'' Mickelson said. ''I didn't expect to play 1 over coming in. But I'm not going to complain because I made a lot of good putts on the front.''

He goes to Pebble Beach on Saturday as he goes after a record-tying fifth win in this event.

Iwata, who tied a major championship record with a 63 at the PGA Championship last year at Whistling Straits, had a 66 at Pebble Beach.

Mickelson, Freddie Jacobson (69 at Spyglass Hill) and Chez Reavie (70 at Pebble Beach) were one shot to par behind at 10 under, while Justin Rose had a 68 at Monterey Peninsula and was at 9 under.

Jordan Spieth failed to birdie any of the par 5s at Monterey Peninsula - he is 1 under on the par 5s this week even though he could reach all of them in two shots - and his round of two birdies and 16 pars put him at 3-under 140 and eight shots out of the lead.

Rose thought Monterey Peninsula was difficult because the greens are not as pure as the other courses. Then he was told that Kang was at 11 under and playing his final hole and Rose smiled and said, ''The greens are obviously perfect.''

Kang couldn't agree more. He lost track of the number of birdie putts he made in the 15-foot range, saying they were ''too many to count.'' Some of them he read on his own. Other times he brought in the experience of his caddie, Mike ''Fluff'' Cowan, who is working for Kang while Jim Furyk recovers from wrist surgery.

And the 28-year-old South Korean had an actor at his side cheering him along.

Romano, who has become a regular at this event, wasn't sure the name of his partner earlier in the week. No offense taken. Kang didn't know him, either.

''One of my buddies came up and said, 'Oh, you're with Ray. He's very famous,''' Kang said. ''I did some research on it. I Googled Ray and he was like on a really famous TV show for six or seven years. He gets like almost a third more earnings from TV drama show.''

Asked if Romano knew him, Kang smiled and said, ''I think he'll remember me after today.''

Kang had three birdies and an eagle on the back nine to start his round, picked up a pair of birdies early on the front nine and then poured it on with three straight birdies that brought him to 11 under with only the par-3 ninth remaining.

He hit what he called his worst shot of the day, a big cut that came up short and in the rough. He chipped to 15 feet and saved par.

''It was just going in every single time,'' he said.

Jason Day had a 66 at Monterey Peninsula to get within five shots of the lead. Patrick Reed, playing alongside Mickelson, had six birdies in a seven-hole stretch on the back nine and also was at 6 under.

DIVOTS: Monterey Peninsula was the only course that played under par on Friday, just barely. Pebble Beach again played the toughest by a small margin over Spyglass Hill. ... Ryan Palmer made a hole-in-one on the third hole at Spyglass Hill.