Mickelson up by 2 at Pebble 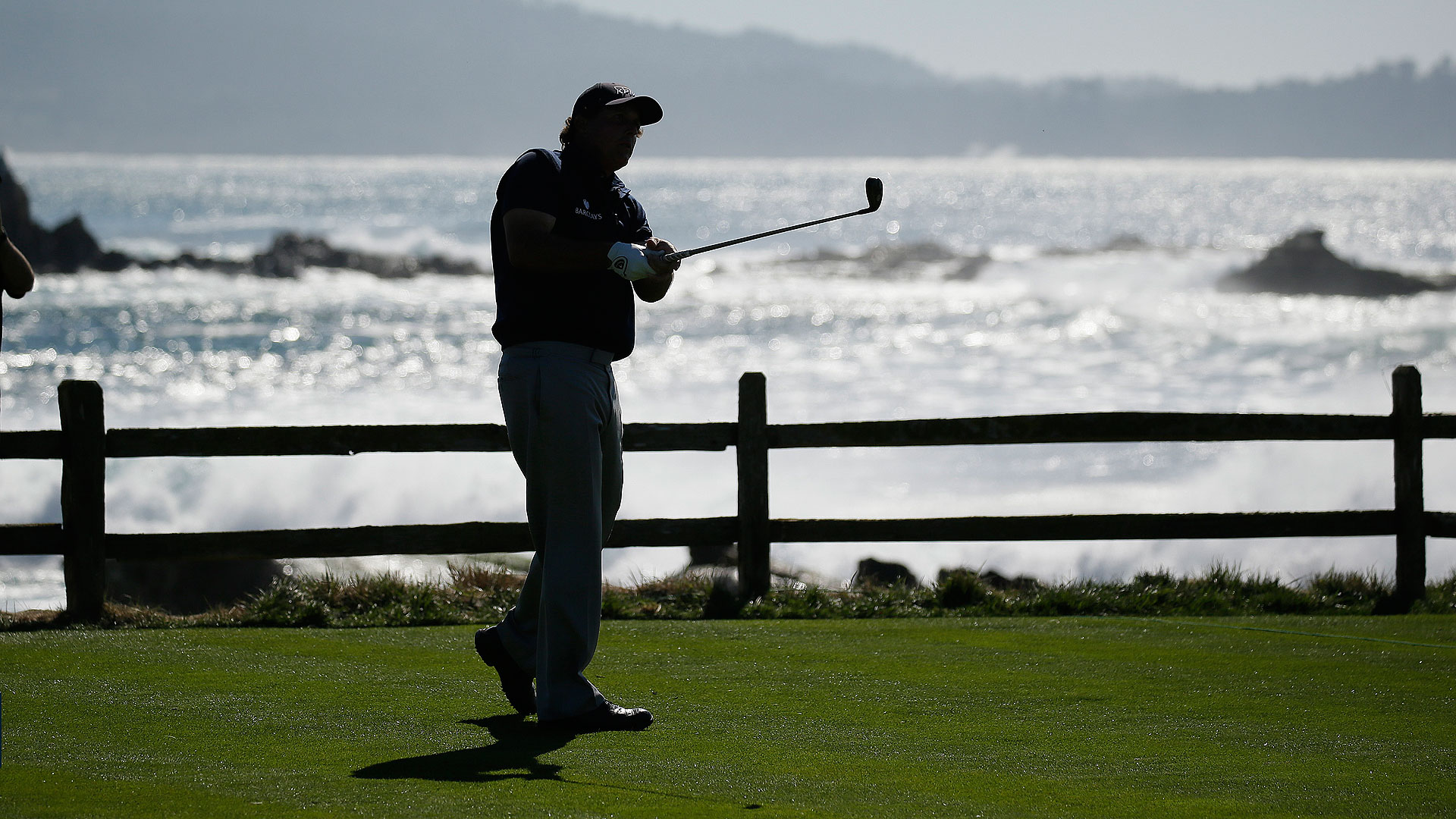 PEBBLE BEACH, Calif. - Far away from the commotion of the celebrities Saturday at Pebble Beach, the most accomplished star among golfers quietly went about his business.

That won't be the case for Phil Mickelson on Sunday.

Mickelson efficiently pieced together a 6-under 66 in the AT&T Pebble Beach Pro-Am, though it only looked easy on the card. He made birdie on all but one of the par 3s, scrambled for par on half of his holes and wound up with his first 54-hole lead since the 2013 U.S. Open.

The spotlight will be all his in the final round.

It's a chance to end the longest victory drought of his career - 52 events worldwide since he last won at Muirfield in the 2013 British Open. He was two shots clear of Hiroshi Iwata, a 35-year-old with two victories on the Japan Golf Tour. And he was poised to join Mark O'Meara with his fifth victory at the Pebble Beach Pro-Am.

The next six players on the leaderboard have combined for a whopping four PGA Tour victories. The 45-year-old Mickelson will be going for No. 43.

And yet he left the magnificent sunshine with a mixture of excitement and concern, along with his typical fill of optimism.

It was hard work.

''I was very pleased to shoot that round, obviously, but there were a lot of holes I just had to fight for pars,'' Mickelson said. ''It wasn't a pushover by any means.''

He planned on bringing in Andrew Getson, his new swing coach, to sharpen his game ahead of the final round.

Iwata, who tied a major championship record with a 63 at Whistling Straits in the PGA Championship last year, had six birdies in his round of 69 at Spyglass Hill.

He has yet to finish in the top 20 in America.

''I haven't felt any nerves or I haven't felt any pressure quite yet, but whether it's going to be regardless of tonight or tomorrow morning, I just want to make sure I go out there and in a good mental condition,'' Iwata said.

Freddie Jacobson had a 68 at Monterey Peninsula, which for the first time this week played the toughest of the three courses because of the brisk wind. He was three shots behind, along with Sung Kang, who had a 70 at Pebble Beach.

Jordan Spieth, the world's No. 1 player, was happy to have a tee time on Sunday.

Spieth struggled on the par 5s for the third straight round, playing them at 1 over at Pebble Beach. He had to get up-and-down for par on the par-5 18th for a 74 to make the cut on the number. He has played the par 5s in even par for the week.

''I'm not in contention. It will be the first stress-free round that I've really had in quite a while where I've played a Sunday not having a chance to win,'' Spieth said. ''It's not good, but at the same time, I think I can get into a groove and not lose any hair over the back nine. I'm going to fire at some pins.''

Jason Day had a 68 at Pebble Beach, though he was still six shots behind. Jimmy Walker made a pair of eagles on the front nine at Pebble for a 63 and was seven behind.

Mickelson got as much as he could out of his 66.

He played at Pebble Beach with the rest of the celebrities, who are the main attraction on Saturday, except that Lefty teed off on the back nine away from all the commotion of clowning, dancing and even lifting CBS Sports reporter Dottie Pepper into the crowd near the 15th tee.

Mickelson's pitch to the 18th went through the green, and he chipped in for a birdie to make the turn in 3 under. He had to scramble for par out of a bunker on No. 1. On the third hole, he drove into a fairway bunker and purposely played away from the flag, chipping just short of the green for a good angle at the pin.

He also had to get up-and-down for par on the short par-4 fourth hole. Those typically are the scoring holes, but he took off from there with three straight birdies, including a 20-foot putt on the 112-yard seventh hole, tougher than usual because of a firm green and a breeze at the back.

Even his birdie at the par-5 sixth was no picnic. Mickelson short-sided himself on his second shot and had to hit a flop shot over the bunker to about 4 feet. He closed with two solid pars (one from the front bunker on No. 8) and is trying not to look too far ahead to Sunday.

''It's been awhile since I've been in contention and it would mean a lot to me to be able to play a good final round tomorrow,'' he said. ''And as well as I've been hitting the ball, the score was great, but the ball striking wasn't indicative of how I've been hitting it. So I would like to get that dialed in for tomorrow's round.''