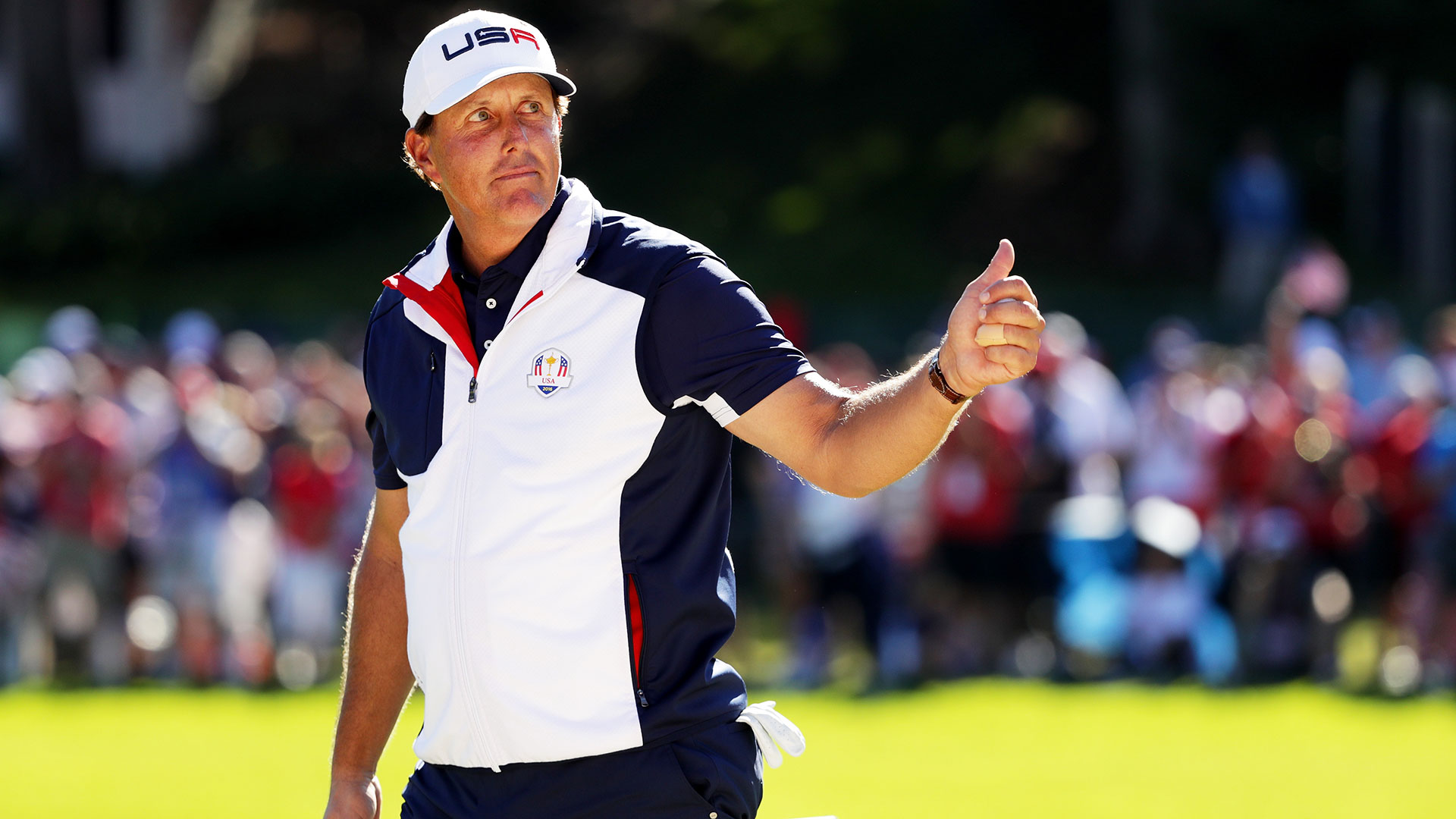 Phil Mickelson has more than just an elusive U.S. Open title on his mind for 2018. He wants desperately to be on another Ryder Cup team, and he's willing to add tournaments to his schedule if that's what it takes.

Mickelson already holds the U.S. record by qualifying for 11 consecutive teams, and he has made 23 straight appearances in the Ryder Cup and Presidents Cup combined. But this isn't about a streak. It's about having a chance - perhaps his last chance - to win a Ryder Cup in Europe.

''That's a big goal of mine, and if I play like I've been playing, I'll make the team,'' Mickelson said at the HSBC Champions in Shanghai.

Whether he speaks from confidence or hope remains to be seen.

Mickelson hasn't won since the 2013 British Open, and the last PGA Tour season was his first without recording a top-3 finish. He plans to start next year at the CareerBuilder Challenge in Southern California and play the entire West Coast from there, followed by the World Golf Championship in Mexico City.

Mickelson has been on five losing teams in Ryder Cup matches held on European soil. There were two close calls. One was in 2002 at The Belfry, when the matches were tied at 8 going into Sunday singles. Europe won the last session, including Phillip Price defeating Mickelson. The other was in Wales, when Graeme McDowell won the final match for a one-point victory.

Mickelson, who turns 48 in June, doesn't see Paris next September as his last chance to win in Europe. Told that he would be 52 the next time the matches go to Europe, Mickelson said, ''I'm not looking that far ahead.''

The 24-year-old won seven times on the Korean LPGA Tour last year, and facing the best competition in the world hasn't slowed her. Park became the fourth South Korean player to reach No. 1 in the world, and the first player to get there as an LPGA rookie.

''There won't be any changes because of the ranking,'' Park said from China, where she makes her debut at No. 1. ''I believe my future play is more important that the fact that I moved up in the ranking.''

Her future play could lead to even grander feats.

Park, who won the U.S. Women's Open, leads the LPGA money list at just over $2.1 million with two tournaments remaining. She is second behind So Yeon Ryu for the points-based Player of the Year and already has clinched Rookie of the Year. Not since Nancy Lopez has a player won both awards in the same season.

Park also is No. 3 in the Race to the CME Globe and is second in the Vare Trophy for the lowest scoring average.

KOEPKA'S LIST: Brooks Koepka knew he had a big year from looking at that U.S. Open trophy. A look into his closet brought even more evidence.

One of Koepka's traditions at the start of every year is to go down to the beach and write a list of goals for the year on a yellow sheet of paper. He tapes it on the wall of his closet, then invariably forgets about it.

''I'm usually looking down trying to find clothes and shoes,'' he said.

A few weeks ago, he happened to look at eye level and noticed his list for the year, which had about seven items related to golf and five items off the golf course. Among the ones he ticked off was winning a major (U.S. Open), having at least a share of the first-round lead in a major (British Open) and then one of the bigger ones, having the lowest aggregate score in the majors (21 under par).

He described them as ''little goals,'' only because of the detail, such as having the solo lead after the first round. He took care of that Thursday in the HSBC Champions.

''You can make them as detailed as you want,'' he said. ''When you go into specifics, a lot of those things come true.''

He didn't get them all.

One goal was to not miss a cut. He missed the cut by one shot in his first tournament of the year at Torrey Pines. He also wanted to win multiple times, meaning he will have to either successfully defend at the Dunlop Phoenix next week in Japan or win the Hero World Challenge.

''The biggest change for me was off the golf course,'' Koepka said. ''The hardest thing for me was making sure I was in the gym five days a week when we played. Some days I've gone seven.''

Overall, Koepka was pleased with how many he got. He'll do it again this year, only at a different beach. Koepka will be on Maui for the Sentry Tournament of Champions.

WHO WANTS TO BE A MILLIONAIRE?: The LPGA tied a record when Stacy Lewis tied for 15th in the Toto Japan Classic. Lewis became the 15th player this year to top $1 million, equaling the number from last year.

And it's about to grow.

Women's PGA champion Danielle Kang is $647 short of $1 million and is assured of topping the $1 million mark next week at the CME Group Tour Championship. Minjee Lee is the defending champion this week in China. Lee is $3,268 short of $1 million, and provided she doesn't withdraw from Blue Bay, she will top $1 million.

Amy Yang and Mirim Lee will have to play well next week in Naples, Florida, to have a chance. Lizette Salas and Michelle Wie are further away from, but still in range of, the $1 million mark. Both are playing in China and next week at the season finale.

DIVOTS: Four of the five winners of full PGA Tour events this fall were in the Tour Championship. ... Patrick Cantlay won in Las Vegas at 9-under 275, the highest winning score by seven shots since it became a single-course event in 2008. This was just the third time the winning score has been worse than 20-under par. ... Jason Day, who started the year at No. 1, is now at No. 12. ... The PGA of America has extended the contract of chief executive Pete Bevacqua through 2024. ... Woodmont Country Club in Rockville, Maryland, which has hosted U.S. Open sectional qualifying 30 of the last 31 years, has been selected to host the U.S. Women's Amateur in 2020. ... The PGA Tour Champions has a new title for its Tucson event - the Cologuard Classic. Cologuard, produced by Exact Sciences, is a colon cancer screening test used at home.

STAT OF THE WEEK: In the last two years, Shanshan Feng has three victories, two runner-up finishes and two third-place finishes during the LPGA's fall version of the Asian swing.