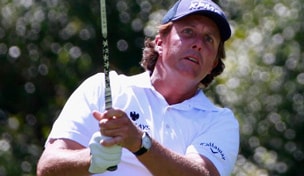 SHANGHAI – Phil Mickelson was hard at work Wednesday morning on the practice range at Sheshan International, and not just on his golf swing. He was trying to learn a Chinese phrase, and he rehearsed it over and over to make sure he got the pronunciation just right.

For all the autographs he gives, Mickelson never signs during his round, even if it's a practice round when the course is closed to the public. He was looking for a way to explain that to the Chinese gallery without coming across as aloof. The first option was ''Not now, later,'' except he figured ''later'' might translate to five minutes.

Mickelson is just as popular in China as he is at home. He engages the crowd. He has fun with the staged photo calls, such as Tuesday night in the Bund district when he dressed in a traditional robe and acted the part of a war hero returning home.

One year, he was sitting across from Tiger Woods in a game of Chinese checkers. The idea was to photograph golf's two biggest stars, and the best rivalry of their generation. But at the last minute, Mickelson spontaneously threw both arms in the air to make it look as though he had won.

As for the robe, the sword and a dance routine he tried (with limited success) to follow?

''Part of my enjoyment for participating in this tournament is some of the cultural experiences we've had, from Tai Chi two years ago to Chinese checkers, where I beat Tiger in that game,'' Mickelson said as the room erupted in laughter.

The golf hasn't been too bad, either.

Mickelson is a two-time winner of the HSBC, including 2009 when it was the first year with World Golf Championship status. He played in the final group with Tiger Woods that year and put him away early.

The HSBC is full-fledged WGC for the first time this year, attracting one of its stronger fields. Though it is missing Nos. 1 and 2 in the world – Tiger Woods is doing corporate outings in the region, Adam Scott is resting up for the hero's welcome he is sure to receive in Australia with his green jacket from the Masters – it has 40 of the top 50 players in the world.

For Mickelson, it's the end of a long and fruitful year.

He started at No. 17 in the world and has a chance this week to go to No. 2 if he were to win. He added the third leg of the career Grand Slam with his popular win at Muirfield in the British Open. He came within a fraction of an inch of 59 in the Phoenix Open, which he won. He added another international title at the Scottish Open.

''I would love to finish strong,'' Mickelson said.

Last week in Malaysia, he would love to have known where the ball was going. Mickelson said he rarely felt as hopeless as he did at Kuala Lumpur, coping with a two-way miss and realizing that his swing hasn't been reliable for some time. A few days later, optimism returned.

''The last two days, my game started to come around,'' he said. ''And as I enter this tournament, I enter with a lot more confidence than I've had in a while. Sheshan is a golf course that I feel very comfortable on. I feel like I know how to play this course successfully, and I'm looking forward to the week.''

The field includes Rory McIlroy, defending champion Ian Poulter, Lee Westwood and Sergio Garcia, four prominent players from Europe's winning Ryder Cup team, all of them still looking for their first win of the year. McIlroy gets the most attention because he started the year at No. 1 in the world and has fallen to No. 6. He is starting to swing the club beautifully though, and he beat Woods in their exhibition match Monday for the second straight year.

Mickelson, meanwhile, has shown that coming to Asia can pay off in more than just trophies. He has invested plenty of time, particularly in China, and already has at least three golf projects in the works. He spent Monday at Mickelson International Golf Club in the Shanghai area, which will open in the spring.

He has two other courses, one that includes a massive practice facility.

''I believe China and other parts of Asia are the biggest growth opportunity in the game of golf,'' he said. ''And I feel as though we should all help expose the greatness of the game of golf to these parts of the world, and see the game flourish.''