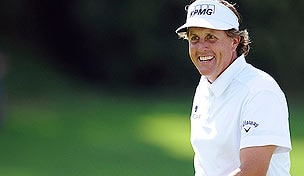 LOS ANGELES – Phil Mickelson wasn’t at his best Friday at Riviera. Two shots at least helped him stay in the lead.

Despite having only two birdie chances inside 15 feet, Mickelson holed out from the eighth fairway for eagle and chipped in for birdie on the par-3 16th. That carried him to a 1-under 70 and a one-shot lead over Pat Perez in the Northern Trust Open.

Mickelson made three par saves from outside 10 feet, starting with his opening hole at the par-4 10th. He went from the front bunker to the back bunker, blasted out safely to 18 feet and curled in the par putt.

That set the tone for a day that only looked good on the scorecard.

“I probably didn’t play the greatest today, but I was able to kind of salvage a good round and had a good break on eight where I holed out from the fairway,” he said. “That was a nice little bonus.”

Perez had a tournament-best 65, without a bogey on his card, and he saved his best shot for the final hole. He hit his tee shot on the 18th and was too far right, the green blocked by the eucalyptus trees. Perez cut a 6-iron, hopeful of finding the green, and it wound up 12 feet away for a birdie he wasn’t expecting.

“I didn’t hit it like you’d think I would,” Perez said. “I didn’t drive it all that great. I just scrambled well. I put myself in the right places to make par or birdie.”

Mickelson was at 6-under 136, assured of being atop the leaderboard for the third straight round.

Before he could putt, he was stung by a bee in his arm.

“I haven’t been stung by a bee in probably 20 years,” Kuchar said. “I had stopped being scared of bees. The thing got me, and it was really painful. It was not much fun.”

Bubba Watson had a 69 and was in the group another shot back, while world No. 1 Luke Donald had a 72 and was only six shots out of the lead.

As usual, the 144-man field could not finish before darkness. Eight players will have to return Saturday morning to finish, with the cut likely to be at 3-over 145.

Mickelson and Perez will be in the final group, both of whom grew up playing each other in San Diego. This is different. Perez hasn’t missed a cut this year on the West Coast Swing, but has only one career win. Mickelson is going for his 41st, and trying to become the first player since Tiger Woods in 2009 to win consecutive tour events.

Mickelson is coming off a big win last week at Pebble Beach.

“He’s playing well, and I’m going to have to play awful well to beat him this weekend,” Perez said. “I’m not worried about him. It’ll be fun to play with him, but I know that I have to play well out there to beat everybody else, as well.”

Joe Ogilvie delivered the shot of the day, making an ace on the 16th hole with a 7-iron. It was his third hole-in-one on the PGA Tour, and he has yet to win a prize. At least at a tour event, he didn’t have to buy drinks.

Mickelson was on the ropes early until his great bunker-bunker par save on No. 10. The trouble was getting the ball close. Mickelson tried to hit a pitching wedge on the 13th and have it run toward the hole, but it checked up and left him 50 feet. On the 15th, he hit 8-iron to stop near the whole, and it released some 40 feet.

Lefty couldn’t get anything right until he got to the 16th, with a tee shot that just ran off the green about 30 feet away. He studied the chip from every angle, and before hitting the shot, leaned over to analyze a section of the green. It was softer, so that became his target with a low pitch that hit the ground quickly and ran to the cup like a putt.

“If I flew it another 5 feet, it was going to be firm, so if I flew it 5 more feet and brought it in higher, I thought it would have raced 15 feet by,” he said.

He ended both nines by missing par putts inside 5 feet, but the eagle atoned for that. Wary of how the greens were earlier in the round, Mickelson said he couldn’t afford his wedge on No. 8 to go long, so he played it out to the right with side spin, and it spun back into the hole.

“I put myself in contention heading into the weekend, which is what my initial goal was,” Mickelson said. “And so with 36 holes to go, I’m right in the thick of it. I’ve got to go out and shoot some low scores, because they’re out there. But I gave myself an opportunity.”

Tim Clark, meanwhile, was headed home after an 82 and a smile. It was his first tournament since The Players Championship because of elbow surgery he had five months ago.

“I felt pretty good, to be honest,” Clark said. “I’m quite surprised with how my body actually felt. I wasn’t able to score at all. In terms of the arm, and how the body felt, I was quite encouraged.

“The fact I could get through 18 holes without having any pain is quite nice.”