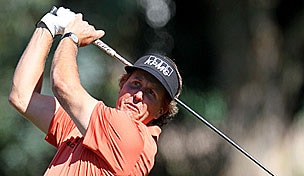 Mickelson hit driver off the deck from just under 300 yards on the par-5 11th that led to a two-putt birdie, and he ended a gorgeous afternoon Thursday at Riviera by chipping in from 35 feet for birdie. That gave him a 5-under 66 and a one-shot lead in the Northern Trust Open.

Dating to the back nine of his second round at the Pebble Beach National Pro-Am, Mickelson has made birdie or eagle on one-third of the holes he has played. And his streak of consecutive holes without a bogey finally ended at 49 on the par-3 16th.

No matter. He looked good with the putter and with his low, penetrating tee shots that he kept below the tree line on a windy day that prevented low scoring.

J.B. Holmes, in his fourth tournament since returning from brain surgery in September, played his final six holes without a par. His round ended with a 315-yard tee shot – a big drive in the cool air of Los Angeles in February – and an approach to 8 feet for birdie at No. 9, the second-toughest hole at Riviera.

That gave him a 4-under 67. He was tied with Hunter Mahan, whose 35-foot birdie at No. 5 sent him on a string of four straight birdies.

They all played in the afternoon, when the wind began to die late in the day.

Jonathan Byrd, who faced the chilly, blustery conditions of the morning, had a 68. He was joined by Carl Pettersson.

The first round was suspended by darkness with 30 players yet to finish the round, a typical occurrence at this tournament with 144-man field and limited daylight.

Mickelson is coming off an 8-under 64 in the final round at Pebble Beach, where he rallied from a six-shot deficit – and beat playing partner Tiger Woods by 11 shots – to change the outlook on his West Coast Swing. Riviera is his final tournament before the Tour moves to Florida, and even on a different golf course, not much has changed.

He holed a 30-foot birdie putt on the long par-3 fourth hole, and then really got going on the back nine.

After a tough pitch to 12 feet that led to birdie on the 10th, Mickelson had 297 yards to the hole on the 11th and decided to hit driver, a shot he had not tried in months.

It came off perfectly and climbed onto the front edge of the green, making Mickelson the only player to have an eagle putt on the 587-yard hole, which played right into the wind. The pin was all the way back, away from a large hump in the putting surface, which gave Mickelson the green light.

His eagle putt from 60 feet died next to the hole.

“I didn’t think it was going to necessarily be reachable into that wind, but I was able to hit a low drive off the tee that scooted along the ground, and I felt like if I could hit one more of those with a driver I could get right up by the green,” Mickelson said. “I felt like it was worth the risk to try to scoop one up.”

The chip-in from behind the 18th was a bonus.

Mickelson made his lone bogey when his chip behind the 16th green ran 7 feet past the cup, and he missed the putt. On the 17th, his wedge rolled back to 7 feet for birdie, but the putt slid by on the left.

He faced another quick chip on the 18th, but it dropped in with perfect speed.

“It wasn’t one I was really trying to make,” he said. “It was quick, it was downhill, and I had to play about 4 or 5 feet of break, so it’s not one that you’re trying to get aggressive with. I was trying to get good speed and try to let it feed with the break, and I got fortunate, obviously, that it went in.”

Holmes was the first player to reach 5 under, and that’s where his fun began – consecutive bogeys when he failed to get up-and-down from just short of the green; a tap-in birdie at the par-3 sixth, with the pin below the bunker in the middle of the green; an 18-foot birdie on the seventh, a three-putt double bogey on the eighth and the birdie at the end.

He has struggled with a slight loss of power since brain surgery in September, and he even topped a shot in Phoenix a few weeks ago. But it’s all starting to come together.

“I feel like each week my swing has definitely gotten a little bit better and improved a little bit,” Holmes said. “My swing speed has slowly come back a little bit being out here and playing this much.”

Byrd woke up Thursday morning to hear the wind whipping at his rental house on the Pacific bluffs. The last thing he wanted to do was play golf at Riviera, but it worked out well for him. He made five birdies in the toughest of conditions. The average score from the morning wave was 73.7.

“We’re staying up on a bluff about five miles away,” he said. “I got out of bed this morning and walked outside, and I was pretty anxious about playing this golf course today because it was howling on top of that bluff. And it whipped all day. My approach was just to keep it in play and have a pretty conservative game plan.”

The afternoon players got a slight break, though the wind remained a factor.

“The last seven holes the wind started to die down progressively, and by the end, it couldn’t be playing any nicer or any better,” Mahan said. “So I was excited to come make some birdies late.”

DIVOTS: UCLA sophomore Patrick Cantlay, who didn’t miss a cut on the PGA Tour last year, opened with a 78. The Northern Trust Open also gave an exemption to Texas freshman Jordan Spieth, who had a 76. … Tim Clark, playing for the first time since The Players Championship because of elbow surgery, was 4 over through 16 holes.