Mixture of youth and experience at Sea Island 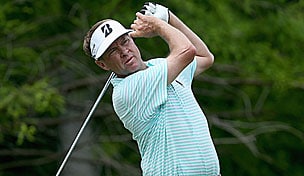 ST. SIMONS ISLAND, Ga. – Davis Love III was in the learning center at Sea Island Golf Club over the weekend when he looked out the door at four players hitting balls, including PGA Tour rookie Kevin Tway. It brought back memories of Love's early days on tour.

And he has every reason to suddenly feel much older than 49.

Love and Bob Tway were contemporaries, both PGA Championship winners. Love could recall a time some two decades ago when their wives would drop the children off at day care during a PGA Tour event. And now one of those kids is part of the field at The McGladrey Classic.

''It's just incredible that I'm playing in a tournament with Kevin Tway,'' Love said. ''Now I see how Jay Haas felt when his kids were coming along ... and then Billy Haas won on the tour. It's pretty neat to see that progression and to last that one. I was complaining one time, 'I can't believe all these kids I knew are growing up and they're coming out on tour.' And they said, 'At least you're still playing with them.'

The PGA Tour returns to America this week after two weeks in Asia, and Sea Island feels like a felicitous meeting of young and old.

Tway, who earned his card by finishing fifth on the Web.com Tour money list, was given a sponsor's exemption. He's staying with Love in his house at Sea Island, along with Justin Thomas, who turned pro after playing the Walker Cup in September.

For every Tway and Thomas, there is Fred Funk and Mark Calcavecchia, both regulars on the Champions Tour.

Love is more than just a tournament host at Sea Island, where he has lived since he was a teenager. A year ago, he was tied for the lead going into the final round with Jim Furyk. They were overtaken by Tommy Gainey, who two-putted for par and a 60 to win his first PGA Tour title.

David Toms, who turns 47 in January, can relate with what Love is feeling. He can still remember going duck hunting in Louisiana with 6-year-old Casey Wittenberg.

''I'm playing in Memphis and Harris English is about to win the tournament,'' Toms said. ''The first time I played that tournament, he wasn't even born.''

Toms knows who some of these young guys are, at least by name – Luke Guthrie, Hudson Swafford, Morgan Hoffmann, Russell Henley. He doesn't know much about them, except for someone like John Peterson, who went to LSU and now uses Toms' old caddie.

''You watch a Walker Cup, and they're just names,'' Toms said. ''You don't really know them until you're trying to win a tournament against them.''

Thomas was a teammate at Alabama with Love's son, Dru.

''It inspires you to see the young guys, but it also makes you award that, 'Hey, if I'm going to compete, I've got to follow them to the gym and I've got to keep working hard on my game' because there's a lot of guys that are ready to take your spot.''

With the new wraparound season, the McGladrey Classic is the second-to-last tournament of 2013 before a short winter's break until the tour resumes in Hawaii. Three players made the trip from Shanghai (HSBC Champions) to Sea Island – Boo Weekley, Scott Piercy and Brian Gay.

Being the week after the two-week Asia swing was sure to hurt the field, though the McGladrey Classic still landed Matt Kuchar and Zach Johnson, who both live in the Golden Isles. Sea Island is quickly becoming a haven for PGA Tour players, not with numbers found at Lake Nona or West Palm Beach, but growing.

Jonathan Byrd was among the first to join Love at Sea Island. The list includes Kuchar and Johnson, Lucas Glover. Johnson doesn't need a courtesy car this week. He can ride a bike to the course in under three minutes.

''It's a nice group,'' Love said. ''They tend to call me 'Uncle Davis' when they need something. Other than that, it's a great group and they're a great influence on me. We've got great guys around to play golf with, to challenge, to push you. I think it's just going to continue.''