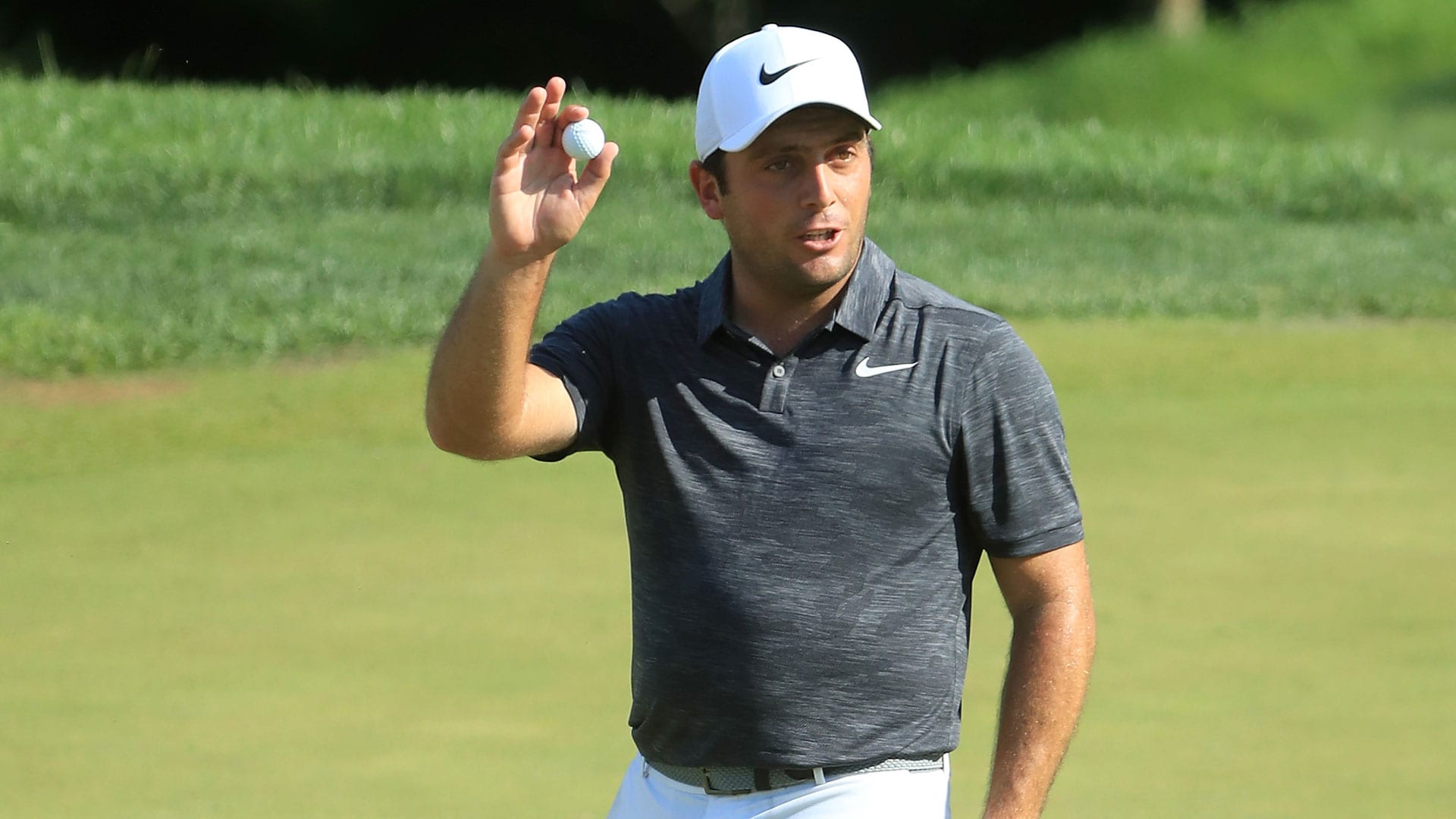 Ancer and Molinari each handled the scorching heat on the TPC Potomac at Avenel Farm and shared the lead going into the final round.

Ancer birdied two of his last three holes for the lowest score of his career, an 8-under 62, giving the 27-year-old Mexican his best shot at a first PGA Tour victory. Ancer has never been in the top 10 going into the final round in 22 previous starts.

Molinari also is going for his first official PGA Tour victory, though that comes with an asterisk. He won a World Golf Championship in Shanghai in 2010, though the PGA Tour did not recognize the HSBC Champions as an official win until a year later.

Woods was six shots behind, the seventh straight tournament he has been at least five shots behind going into the final round. It sure didn't sound that way, and for most of the round, it didn't look that way.

With his fifth birdie of the front nine, Woods was one shot out of the lead. And then he opened the back nine with a pair of birdie chances just inside 10 feet and missed the both. He never really regained his momentum, finished with another bogey and shot 68.

Considering the scoring average was 69.6 in the third round, he wound up losing two shots to the lead.

''It was frustrating because I played better than what my score indicates,'' Woods said. ''I thought that 10 under would have been a good score for me to end up at for the day, and I could have easily gotten that today on the back nine.''

He didn't, and now has more ground to make up.

The nine players ahead of him have combined for just five (official) PGA Tour victories.

Molinari has five European Tour victories, has played on two Ryder Cup teams and is No. 17 in the world.

The Italian is playing at the National and plans to be at the John Deere Classic in two weeks, even though the European Tour is in the meat of its summer schedule with national opens in France, Ireland and Scotland leading up to the British Open. Molinaro is currently among qualifiers for the Ryder Cup team, but his FedEx Cup standing is at No. 123.

He's making the most of his first trip to the TPC Potomac. Even though he missed a few short putts on the front nine, he closed with a 30-foot birdie putt on the par-3 17th and hit wedge into 5 feet for birdie at the 18th.

''It's where I want to be,'' Molinari said, referring more to his position on the leaderboard than in heat approaching 100 degrees. ''I would have been happy with even 11 or 12 under. The main thing today was to stay close to the leader, so I've done a very good job of that. Tomorrow I just need to go out and do my best, hit as many good shots as possible and see if that would be enough.''

Ancer was tied for the lead after the opening round at the Memorial, which is the only other time he has been atop the leaderboard after any round on the PGA Tour. Conditions have been changing since the opening round with so much sun, no rain and fairways that are getting faster. That was more bothersome to Ancer than the heat.

''I grew up in Mexico, in the north part of Mexico where it's very hot,'' he said. ''Didn't bother me. I would rather play in this than cold weather.''

The course certainly has everyone's attention.

Woods found that out the hard way with three shots from the rough that sailed some 30 yards over the green, leading to bogeys.

Armour shared the 36-hole lead with Beau Hossler and Brian Gay, who both failed to break par. Hossler shot a 71 and was five shots behind, while Gay had a 72. Rickie Fowler, the only player from the top 10 in the world at the TPC Potomac, had a 69 and was eight shots behind.