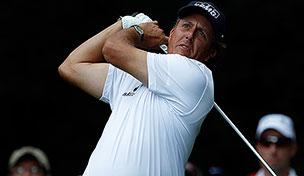 CARMEL, Ind. – Phil Mickelson, an exception in so many ways, calculated the odds and did the math.

Remember, this is the guy who once had his caddie tend the flag when he was 72 yards away in the fairway at Torrey Pines because he needed eagle to force a playoff. One year at Firestone, he contemplated hitting driver off the deck on the par-5 16th and trying to skip it across the pond to get it close. And then were was Bay Hill, the year Mickelson was two shots behind Tiger Woods and tried hitting 4-iron under the trees and over the water for a chance at eagle.

He didn't pull off any of those shots, though it wasn't from a lack of effort, confidence or imagination.

Mickelson made an exception at Crooked Stick.

He stood on the 18th tee Sunday in the BMW Championship needing an eagle on the 462-yard closing hole to force a playoff with Rory McIlroy. On this rare occasion, however, Lefty wasn't willing to risk the ridiculous odds of trying to hole a shot from 192 yards for eagle, not when it might cost him a par.

Mickelson knew a par would mean a tie for second, which would move him up to No. 4 in the FedEx Cup. The top five in the standings only have to win the Tour Championship to capture the FedEx Cup and its $10 million bonus. If he had gone for glory and wound up with a bogey, Mickelson would have been No. 8 in the standings and needing some help next week at East Lake.

His shot leaked slightly away from the water and came up 70 feet away. He made a 3 1/2-footer for par and tied for second.

''I accomplished one of my goals, which was to get in the top five,'' Mickelson said after his round. ''The other would have been, obviously, to win. But more than that, I just feel really good about where my game is headed, and hopefully I'll keep improving on that for next week.''

It was an example that six years into the FedEx Cup, at least some players are starting to grasp the points system, how it works and where it can lead. For those who haven't caught on or don't care to figure it out, a bigger picture has emerged in the last three weeks about the FedEx Cup.

With so many great tournaments, the sum of the parts is greater than the whole – even the whole $10 million.

But then, that was always going to be the case.

What initially cost the FedEx Cup credibility were too many cheerleaders from PGA Tour headquarters who made the hopeless argument that this would determine anything more than who got really rich by playing the best golf in four strong tournaments, with emphasis on the last event.

It does not carry the prestige of winning a major.

It does not determine the best player in golf, as McIlroy might discover if he doesn't win the Tour Championship.

If nothing else, it gives the Tour a chance to wrap up its season with a competition that most rewards the fans as much as the players. Golf no longer limps toward the end of the year with watered-down fields at tournaments hardly anyone watches. It has four tournaments with the best players, and as Lee Westwood said on the eve of the final round at Crooked Stick, ''The cream has risen to the top, hasn't it?''

The Barclays had Sergio Garcia and Nick Watney, with Dustin Johnson and Brandt Snedeker making a run and boosting their hopes of getting picked for the Ryder Cup (they were). The Deutsche Bank Championship had McIlroy and Louis Oosthuizen, two of the best swings in the game, being chased by Tiger Woods, Mickelson, Johnson and Snedeker. The BMW Championship featured McIlroy, Westwood, Mickelson, Woods, Johnson, Adam Scott and Vijay Singh.

Tour commissioner Tim Finchem woke up Sunday morning to find more than a dozen text messages on his phone, some filled with sarcasm about how this FedEx Cup thing isn't working, others raving about three straight weeks of strong leaderboards and compelling finishes.

That much was to be expected this year.

One reason Hunter Mahan could win twice and still not qualify for the Ryder Cup is that all the other great players were winning, too. Maybe it's a fluke, maybe it's just cyclical, but this has been a year for the stars to shine on the Tour. The 36 tournaments to date (not counting opposite-field events) have been won by 27 players who started the year in the top 50 of the world ranking.

The FedEx Cup playoffs have been no different. Bring the best players together, and it produces the best leaderboard.

Not surprisingly, each event has felt big, especially the last one. Crooked Stick had not seen the world's best players since the 1991 PGA Championship, and the result was predictable. Even during a soggy week, fans were three-deep down the 10th fairway when McIlroy and Woods (and Watney) teed off in the opening round Thursday.

It had a bigger buzz than the three World Golf Championships, and it held its own against the PGA Championship at Kiawah Island, where the nines are separated by the driving range, and fans can only watch from one side of the fairway on some holes.

Now for the conclusion next week at East Lake.

It could be dramatic, similar to when Bill Haas and Mahan were in a sudden-death playoff to determine who won the FedEx Cup. There might not be any drama at all during the last hour. Or it could be one of those years, like 2009, when Mickelson won the Tour Championship, and Woods won the FedEx Cup.

Some confusion is inevitable when it takes an accountant to sort out who's winning what. But when the golf is this good, when the leaderboards are this strong, does it really matter?