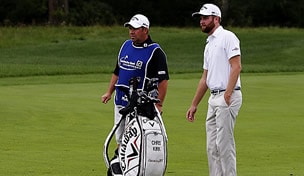 Getty Images
VIRGINIA WATER, ENGLAND - MAY 23: Miguel Angel Jimenez of Spain in action during the 'Ole Seve' Pro-Am in aid of the Seve Ballesteros Foundation at Wentworth Club on May 23, 2011 in Virginia Water, England. (Photo by Richard Heathcote/Getty Images)  -

Neither has Chris Kirk, who can laugh about it now.

Kirk didn't get in the pro-am at the TPC Boston, so he went to the range for a few hours and was gone by mid-morning. He was done for the day. His clubs were not.

Turns out an amateur in the afternoon needed rental clubs and was sent to the clubhouse. He went to the locker room instead, and next to his temporary locker – right below Kirk's – was a Callaway staff bag with a full set of clubs, balls, gloves and even a pair of shoes. The words ''Chris Kirk'' apparently meant nothing to him. He grabbed the bag and headed out to play.

His pro in the group was Merrick, who found it odd that an amateur would have a staff bag belonging to Kirk.

''It takes a hole or two to get your bearings, get the names right,'' Merrick said. ''I noticed the Chris Kirk bag. I was thinking he got it an auction or something. Guys get new bags all the time. I didn't think anything of it. But he hits this drive on No. 2 and popped it up into the trees on the right. He turned the club over and goes, 'This rental set has a driver that says 'prototype.' And I'm thinking, 'Prototype for a rental set? There's no way.'

Merrick immediately sent a text message to a PGA Tour official that said, ''You better get a rental set and size 11 shoes out here now.''

Kirk, meanwhile, was back at his hotel when he received a call from the Tour and headed back to the golf course.

''It was a bizarre situation, to say the least,'' Kirk said. ''At first, I didn't think it was funny. But I got away unscathed. I lost a glove and a sleeve of balls. The shoes kind of gross me out. It's the only pair of shoes I have with me, so I have to wear them.”

Merrick took a picture on his phone of the amateur carrying Kirk's bag and wearing the shoes. He kept in touch with Kirk to keep his mind at ease.

There was one other twist. Before picking up the bag in the locker room, the amateur decided he didn't like the driver and one of the hybrids, so he replaced them with some clubs he saw leaning against the locker.

''I guess he didn't like the look of my driver, so he took the backup,'' Kirk said. ''Definitely a crazy situation.''

TREVOR TIME: Trevor Immelman never imagined a Web.com Tour event would be on his list of most important victories.

His first win was the South African Open. Another big moment was the Nedbank Challenge, because that's where South African kids could watch the world's best players. the Masters is in a league of its own. ''The biggest tournament on earth,'' said Immelman, who won his green jacket in 2008.

And the Hotel Fitness Championship?

''From a timing standpoint, from the situation I'm in right now, it's absolutely huge for me,'' Immelman said.

Immelman lost the better part of three years with a left wrist injury that required surgery. He lost his PGA Tour card – the same year his Tour exemption from the Masters ran out – when he finished No. 143 in the FedEx Cup.

It wasn't a matter of pride to go to the Web.com Finals. Immelman had enough poor scores over the last few years to get beyond that. He went to Indiana with a good attitude, improved putting and determination to get back to the big leagues. And that's where he's headed.

The win assures Immelman will be among the top 25 on the special money list to get his card, and now he wants more. The leading money-winner of the four tournaments is exempt into The Players Championship.

Most exciting of all is his health.

''That was the only positive I had taken from the year – I was injury-free,'' he said. ''I didn't have to worry about anything. That's something that really excites me. Because when you start withdrawing from tournaments, it becomes a habit. And that's an awful situation to be in.''

SIGN OF THE TIMES: The tournament that kicked off the Ryder Cup points table used to attract a strong field on the European Tour, or at least the field was stronger than usual every other year. But at the Wales Open last week, the only player at Celtic Manor who played on the previous team was Francesco Molinari. He missed the cut.

It's a product of so many European players having PGA Tour membership and playing in America this time of the year during the FedEx Cup playoffs. Eight players from the winning 2012 team were at the TPC Boston for the Deutsche Bank Championship.

For years, the Omega European Masters in Switzerland used to be first event in the qualifying process. That tournament is this week, and even though the PGA Tour has no tournament, Omega is not expecting many top players. That's why the title sponsor is looking for a new date away from the FedEx Cup.

''We're now working very strongly with the European Tour to get the date changed,'' Omega president Stephen Urquhart said in a recent interview. ''Let's face it. Where we are now in September, right in the middle of the FedEx Cup, doesn't work.''

The plan is to move to July for 2015, one week after the British Open.

Rory McIlroy has an endorsement deal with Omega, but he won't be going to Switzerland during his off week, and Omega is fine with that.

''Rory told me he loves Crans-sur Sierre and he is an Omega ambassador,'' Urquhart said. ''But I can't ask him to give up the potential of winning $10 million to come over for one week.''

DIVOTS: Tim Herron is recovering from injuries to his right knee cap and meniscus, which has kept him out of the Web.com Finals. He says he will have eight events next year on a medical extension to get his card. In the meantime, he went to Canada to fish for walleye, discouraged to learn there was a limit (two) and no beer could be consumed on the boat. Talk about a tough year. ... Rory McIlroy has made eight double bogeys over his last two tournaments. ... The Old Course at St. Andrews is raising its green fee by 5 pounds for 2014. It will cost 160 pounds (about $250) during peak season next year. ... The NCAA meeting next week includes a proposal for the Division I women's golf championship to switch to match play.

STAT OF THE WEEK: Players with at least a share of the lead going into the final round have won only two of the last 10 FedEx Cup playoff events.

FINAL WORD: ''He's been there before. I've been there before. Everyone that's out here has been in that situation. ... It's always tough to lose when you're leading. It's part of the game.'' - Henrik Stenson on Sergio Garcia losing a two-shot lead in the final round.