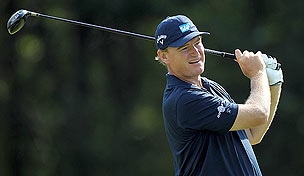 LOS ANGELES - Ernie Els is staging his “Els for Autism” golf challenge again, and this time he has backing from SAP, one of his top corporate sponsors.

He describes it as the largest golf charity event in the world, a series of 30 tournaments from April through September, with the final being held Oct. 19-20 at The Gallery Club in Las Vegas for the low net winning team (two players) and any team that raises at least $10,000.

In the first year, the event included 1,700 golfers, 9,000 donors and raised $1.8 million. “SAP has taken over the golf challenge, so they’ve come in all guns blazing this year, and I think we’re going to have a wonderful time,” Els said. “I think we can double what we did last year.”

Els said with his own money and separate fundraising, he has reached the $9 million mark toward building the center.

“I was struck when I got to the grand finale in Vegas last year,” Els said. “Ninety percent of the people there that played in the challenge, those people’s lives are affected by autism, and a lot of them brought their kids to the event. I met people, numerous families, where the families have three kids, and all three of them have autism at a level where they have to care for their kids. They can’t even go to a school or anything.

“There were some really heart-wrenching moments there,” he said. “We learned. We give back to the autism community, and I think we feel like a big family when we get together there.”

PRESIDENTIAL FUTURE: Fred Couples wouldn’t mind coming back as U.S. captain at the Presidents Cup for a third time.

A decision for the 2013 matches at Muirfield Village is expected in the next few months. The Americans have won the last two times with Couples at the helm, and with Greg Norman leading the International team. Couples said he has spoken to PGA Tour commissioner Tim Finchem and other tour brass.

“I think I have a very good shot at it, and I would love to do it again,” he said.

For the International side, speculation had shifted toward Nick Price, who wanted to wait until after Norman was captain, especially at Royal Melbourne last year.

Now, however, Ernie Els wonders if the Shark shouldn’t get another turn.

One of the complaints from the International team was it didn’t have enough say in how the matches were run - from picking which format to use on opening day, to how the team is selected (such as number of captain’s picks) to how the course is set up.

That’s the biggest difference from the Ryder Cup, which essentially is a competition between two tours. The Presidents Cup is run solely by the PGA Tour. Norman spoke out against these issues in the final press conference in Australia.

“There’s change coming, and it’s because of him,” Els said. “I feel Greg should get the benefit of these changes.”

CHAIRMAN FRAZAR: Harrison Frazar gave up golf for a corporate job when he left Texas, unsure whether he wanted to play the game for a living. It won’t be long before he’ll be in a coat and tie at board meetings again, very much vested in golf.

Frazar has been elected chairman of the Players Advisory Council, winning a player election over Scott Verplank and Ben Crane. As head of the 16-player group, that means Frazar in two years will become one of four players on the PGA Tour policy board.

MATCH PLAY: Ernie Els has had such a love-hate relationship with the Match Play Championship that he didn’t even bother playing in 2004 and 2005. This time, he barely made it. After sitting out last week, Els slipped to No. 65 in the world. The only reason he will get into the first World Golf Championship of the year is because Phil Mickelson is not playing.

Els is desperate to play in such tournaments as he tries to get into the top 50 to avoid missing the Masters.

Els wouldn’t have to worry about the Masters if he had won a green jacket. His closest call came in 2004, when he was tied for the lead until Mickelson holed an 18-foot birdie putt on the final hole. Now, he owes one to Mickelson for getting into the Match Play.

“I’ll buy Phil a steak dinner this week at some point,” Els said with a smile. “Maybe send him a good bottle of Bordeaux or something.”

DIVOTS: The forecast is for a strong wind the opening two days, shifting directions on Friday. … UCLA sophomore Patrick Cantlay didn’t offer much when asked about his future, saying only that he is letting his father sort through the offers and possibilities. … Tim Clark is making his first start of the year. He played only four times last year - the last one as defending champion of The Players Championship - because of a mysterious elbow injury.