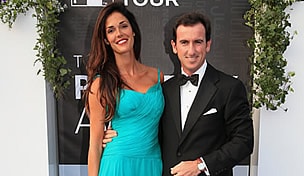 Getty Images
CROMWELL, CT - JUNE 26: Bubba Watson hits his drive on the seventh tee box during the third round of the Travelers Championship held at TPC River Highlands on June 26, 2010 in Cromwell, Connecticut. (Photo by Michael Cohen/Getty Images)  -

COMING TO AMERICA: Gonzalo Fernandez-Castano is not just bringing his game to the United States. Like other Europeans who are taking up PGA Tour membership, he's bringing the whole family. He is moving Dec. 4 from Madrid to Miami with his wife and three young children.

The 33-year-old Spaniard chose Miami mainly because his swing coach, Mariano Bartolome, lives there and works out of Doral. But what makes Fernandez-Castano stand out from other Europeans moving to Florida is that golf was not at the top of his priority list.

''It's a very Spanish place and a city I like a lot,'' Fernandez-Castano said. ''There's a lot of Spanish people. It's a city I've always enjoyed, and also you've got a lot of direct flights to Madrid. So it will easy for my family, my in-laws, anyone who wants to come visit.''

He has found a school near their new home in Key Biscayne. Still to be determined is a golf course to practice. He has heard about Crandon Park, not far from where he will live, though he has yet to see it.

''The only time they have been to the U.S. was last year after Bay Hill,'' he said. ''They came and we went to Disney World. They believe they're going to be living with Mickey Mouse and Donald Duck and Pluto.''

FIVE MORE YEARS: Farmers Insurance stepped in at the last minute in 2010 when the PGA Tour event at Torrey Pines risked going without a sponsor.

Now the company is in for the long haul.

Farmers Insurance and the Century Club of San Diego, which runs the tournament, announced Tuesday that it will extend its title sponsorship for five more years through 2019. The new agreement starts after next year's tournament in January.

That will give Farmers a 10-year run at Torrey Pines, which previously had Buick as a title sponsor for 18 years until the downturn in the auto industry.

Tiger Woods is the defending champion, winning last year for the seventh time. He also won a U.S. Open at Torrey Pines in 2008, the last of his 14 majors.

Along with typically attracting the game's two biggest stars – Woods and Phil Mickelson – the tournament has one of the larger fields on the West Coast swing because it uses the North and South courses at Torrey Pines.

RACE TO DUBAI: Ernie Els was among those irritated by the European Tour policy that forces its members to play in at least two of three ''Final Series'' events leading to the season-ending World Tour Championship in Dubai.

Els has decided not even to bother with Dubai.

''We used to play seven events and you could keep your card in Europe,'' he said. ''Now you have to play more than in America, which is the direction they're going in. I just think it's the wrong one. I've just got to reassess what's going to happen. In my view, it's an absolute joke. I've been a member of the tour for 20 years and they're making it impossible to keep playing.''

Els could have skipped an appearance fee in Macau, though it still puts a burden on players to play a global schedule.

The European Tour already was stung by the mandatory starts when Joost Luiten hit one tee shot in the BMW Masters to give himself a chance to be eligible, though it kept Justin Walters out of the tournament.

Els said the European Tour didn't care when asked how it responded to his criticism.

That might not be true. The tour is said to be reviewing the policy for next year, especially in light of players with families in America and a worldwide schedule.

WGC SWEEP: The United States captured a Grand Slam of sorts in the World Golf Championships by winning all four of them this year.

As for the real slam?

The Americans last won all four majors in the same season in 1982 – Craig Stadler (Masters), Tom Watson (both Opens) and Raymond Floyd (PGA).

DIVOTS: Phil Mickelson had his old Ping Eye-2 lob wedge in his bag at the HSBC Champions. It's the same wedge he used in 2010 with square grooves no longer approved by the USGA. An exception is made for this wedge because it was made before April 1, 1990. ... Jim ''Bones'' Mackay was awarded ''Caddie of the Year'' during the HSBC Champions caddie night. His boss, Phil Mickelson, won three times this year, including the British Open ... The Volvo Golf Champions in South Africa is raising its purse to $4 million, making it even more attractive for European players in a Ryder Cup year. It's the first European Tour event of 2014. ... The LPGA Tour has signed a four-year extension that keeps the popular Kingsmill Championship on the schedule through 2017. It will feature a $1.3 million purse when it is played May 15-18. ... Graham DeLaet and Jonas Blixt have been added to the field of the Franklin Templeton Shootout next month in Naples, Fla. Chad Campbell also will be playing as the replacement for Stewart Cink, who withdrew. ... Jason Day, Billy Horschel and Boo Weekley will represent the PGA Tour in the Wendy's 3-Tour Challenge to be played Nov. 12 at Rio Secco in Las Vegas. ... Rory McIlroy won the match. When it comes to an auction, however, Tiger Woods is no match. A driver signed by Woods went for $45,600 after their duel at Mission Hills. McIlroy's driver that he signed went for $13,100.

STAT OF THE WEEK: Justin Rose and Graeme McDowell are the only players from Europe's winning Ryder Cup team at Medinah who have won tournaments this year.

FINAL WORD: ''It's always a tricky thing when you're a young guy. You might think you're good and you find out you're not that good. Or they find out they're better than they think they are.'' - Thomas Bjorn.