Notes: Harmon thinks Woodland can be world No. 1 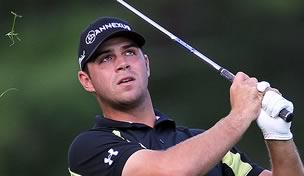 JACKSONVILLE, Fla. - Gary Woodland was irritated that he couldn’t do better than a 70 on the North Course at Torrey Pines. It wasn’t much better on the South Course, where a 72 allowed him to make the cut on the number, and a 74 in the third round wasn’t enough for the 54-hole cut.

Then again, he realized it might take time for him to adjust to a new swing.

“I’m changing the whole path of the swing,” Woodland said. “I’d like to be ready for Augusta.”

Woodland already has gone through substantial changes off the course. When he left agent Blake Smith at Hambric Sports, he also wound up losing his swing coach - Randy Smith, the agent’s father. He left Kapalua at the start of the year and flew to Las Vegas, where he spent six straight days with Butch Harmon.

That he wants to be ready for the Masters would indicate an overhaul. Harmon says that isn’t the case.

“He’s been pretty one-dimensional,” Harmon said Tuesday. “We’re getting him to move the ball around, change his trajectory a little, change

the setup and the path of his swing and get more of a variety of shots, which he needs to have. We knew he wasn’t going to be very good last week. Finally, the last nine holes things were starting to click. But it’s going to take awhile.”

Harmon said Woodland is hitting the ball an extra 15 yards - “I know that’s hard to believe,” he said - to the point where he had to switch the model of his golf ball. Harmon liked the short game but is working on lowering the trajectory of his wedges.

“The kid has a chance to be the best player in the world,” Harmon said.

Asked if he knew it would be a big project, Harmon said, “I still don’t think it is.”

“The physical side is easy,” Harmon said. “It’s the mental side, the belief in what he’s doing. He’ll have to work on that. He’s good on the range.

He’s good in practice. But he reverts to his old stuff in tournaments because he doesn’t trust it.”

Harmon, who has cut down on his stable of clients over the year, now works with Woodland, Dustin Johnson, Nick Watney and Phil Mickelson. Asked who was the shortest hitter from that group, Harmon said, “Me.”

BEGAY HONORED: Notah Begay has been selected for the Charlie Bartlett Award, given by the Golf Writers Association of America to a professional golfer for unselfish contributions to improve society.

Begay is the only full-blooded Native American to win on the PGA Tour. He founded the Notah Begay III (NB3) Foundation in 2005 to battle the epidemic of childhood diabetes and obesity among Native Americans. He has raised more than $3.2 million in three years through his charity golf event.

Over the last three years, the foundation has reached more than 10,000 children in 11 states through golf, soccer, health and wellness and grant programs. The largest grant was to the San Felipe Pueblo in New Mexico to build the tribe’s first recreation center.

Begay will be honored April 4 at the GWAA’s annual awards dinner in Augusta, Ga.

EYE ON ELS: Ernie Els has gone to a belly putter to see if he can improve on the greens. He also went to an eye doctor.

Els, who ranked No. 181 in putting last year on the PGA Tour, has consulted with Sherylle Calder, an eye specialist who also works with the Springboks, All Blacks and England rugby teams to help with hand-eye coordination, concentration and other visual performance aids.

“We’ve been working on some good stuff to do with my eyes, and I can see a lot of positives for me at the moment,” Els wrote on his website. “To use a cliche, she has literally opened my eyes about putting again, and it has helped bring back good memories of what I used to do when I was one of the best putters in the world in the 1990s and early 2000s.

“If my putting properly comes around, I can start winning golf tournaments again.”

Els is at No. 59 in the world and has to crack the top 50 after Bay Hill toward the end of March to secure a spot in the Masters. The first step is to stay among the top 65 for two more weeks and get into the Match Play Championship.

WORLD MONEY: Lee Westwood was No. 10 on the 2011 world money list compiled by “The World of Professional Golf” annual, making him the only player to finish in the top 10 the last three seasons.

Luke Donald was atop the world money list for the first time at just over $9.7 million, followed by U.S. Open champion Rory McIlroy at about $7 million and Webb Simpson at just over $6.5 million. The other six players were Matt Kuchar, Nick Watney, PGA champion Keegan Bradley, K.J. Choi, Gary Woodland and Martin Kaymer.

DIVOTS: Tiger Woods earned $137,041 at the Abu Dhabi Golf Championship. Throw out the majors and World Golf Championships, and it was his highest paycheck from an official tournament since he made $148,929 at the 2010 Deutsche Bank Championship. … Ian Poulter, whose wife gave birth to a boy last week (their fourth child), is making his season debut in the Phoenix Open. Also playing in Phoenix is Arron Oberholser, trying to return from hand surgeries that have kept him out of golf since 2009. … Scott Piercy and Chris Kirk, both of whom are in the Phoenix Open, have not missed a tournament this year. Jhonattan Vegas and Michael Bradley also played the first four events, but they are taking this week off. … Luke Donald stopped by the PGA of America headquarters Tuesday to collect his trophies for the Vardon Trophy and the points-based player of the year award.

STAT OF THE WEEK: Americans have won the first four events on the PGA Tour schedule for the first time since 2001.

FINAL WORD: “I think the players should have less say. We’re not experts at figuring out how the tour works. We’re experts at hitting golf shots.”— Stewart Cink on the debate over proposed changes to the Nationwide Tour and Q-school.