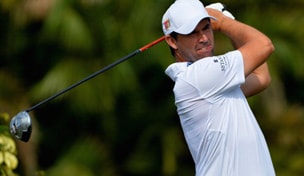 ORLANDO, Fla. – All signs, and particularly the numbers, pointed to another meltdown by John Daly.

He hit three balls into the water on the 16th hole at Innisbrook and made a 12, still only the fourth-highest score he has made on any one hole on the PGA Tour. And when he missed a 4-foot bogey putt on the last hole, he signed for a 90. Daly has had at least one round at 80 or higher every year since 1996.

So what was it like to be in the middle of this? Not a problem for Padraig Harrington.

''He was perfectly fine to play with – very respectful, no issues at all in terms of golf,'' Harrington said.

Daly opened with a 74 in the Valspar Championship, and his second round got off to a rocky start with a four-putt double bogey on the second hole.

''He came out pressing – as we all did – on Friday,'' Harrington said. ''But he was very respectful to play with. He was useful out there. He was trying in terms of lines and getting clubs and things like that. You could see what he was doing. It wasn't like I wouldn't prefer him to be there.''

''I didn't actually see most of the 16th. I was in the toilet when he was hitting it,'' Harrington said. ''But he didn't walk in. He didn't stop trying. He tried to hit the right shots on the last two holes. It didn't seem to us he was shooting that score.''

Two years ago, Daly hit seven shots into the water on the 11th hole at The Lakes in the Australian Open when he ran out of golf balls and walked in. He played that day with Hunter Mahan, who also found him to be good company on the golf course.

The scores paint a picture, however. It was the 62nd time that Daly has posted an 80 or higher, and that's just on the PGA Tour. His highest score was an 18 at Bay Hill in 1998 when he hit six balls in the water on the par-5 sixth hole. He followed that with a birdie on the next hole.

In the Dutch Open years ago, Daly played the final three holes in 1-under par to break 90.

SPARTAN SISTERS: Juli Inkster selected Pat Hurst to be her assistant captain at the Solheim Cup next year in Germany, a natural pick. They are longtime friends and traveling companions. Both went to San Jose State – just not at the same time.

''She actually went to San Jose State on the 'Juli Inkster scholarship.' I don't think it helped her much, but what the heck,'' Inkster said.

She said Hurst called her ''Mrs. Inkster'' the first time they met. Their friendship began in South Africa when she invited Hurst to be her partner in a World Cup.

''I'm nine years older than Pat, but we get along really well,'' Inkster said. ''We're from the same area. She's kind of a flower. She doesn't really stress out too much, which is great, and I don't, either. So that helps.

''I really trust her, and I trust her opinions. She really thinks things out. She might not make a decision right away, but she'll think it out and she'll work it out and then she'll give you her opinion. And sometimes I kind of go too quick, so I think she'll be good at reining me in a little bit.''

CHESSON'S CHASE: Chesson Hadley knocked in a 30-foot birdie putt on the 18th hole and celebrated like it was a winning putt on Sunday afternoon.

This was only Friday at Innisbrook, but it was worthy of a fist pump.

He made the cut on the number.

''That felt just as good as the win last week,'' Hadley said, referring to his victory in the Puerto Rico Open. ''I hate missing cuts. It stinks.''

He knows from experience, having missed five in a row. But after the long birdie to make the cut at the Valspar Championship, Hadley made the most of his chance with rounds of 67-71 on the weekend. That moved him up to a tie for 14th.

Hadley now is No. 59 in the world, and has two more weeks to try to crack the top the 50 and get into the Masters.

ROAD TO THE MASTERS: It looks virtually certain that the Masters will again keep its field under 100 players, which Augusta National prefers. The Masters, with the smallest field among majors, has not exceeded 100 players since 103 competed in 1966.

John Senden's win at the Valspar Championship made him the 94th player eligible. There are three PGA Tour events remaining where a winner could get in (Bay Hill, Texas Open and the Houston Open). From the world ranking after the Texas Open, only Stephen Gallacher at No. 37 is a lock to get in.

That leaves Richard Sterne (No. 52) and George Coetzee (No. 56) on the outside. Neither are PGA Tour members, and there are no European Tour events remaining before the cutoff through the world ranking. Neither are in the field next week at the Texas Open.

DIVOTS: Jason Day is done until the Masters. He withdrew from Bay Hill with lingering pain from a thumb injury. The Australian plans to rest the next two weeks, and then go to Augusta National early with Colin Swatton, his caddie and coach. ... The opening three events on the Florida Swing were won with scores of 8-under-par (Honda Classic), 4-under-par (Cadillac Championship) and 7-under-par (Valspar Championship). Throw out opposite field events or majors, and the last time three straight PGA Tour events were won with a score that was single-digit under par was in 1990. Payne Stewart won the Byron Nelson Classic (8 under), Greg Norman won the Memorial (even) and Ben Crenshaw won Colonial (8 under). ... Jonathan Byrd tied for 32nd at Innisbrook and earned $31,540. That enabled him to fulfill his major medical extension for the rest of the year. ... Here's one way to measure the conditions at Innisbrook last week. The difference between first and last place after one round was only 10 shots. ... The Valspar Championship was the fifth PGA Tour event this year that featured a 54-hole cut because more than 78 players made it to the weekend.

STAT OF THE WEEK: John Senden was the first player to win a PGA Tour event with an opening round over par since Justin Rose at the U.S. Open last year.

FINAL WORD: ''Whoever shows up at an event nowadays has a chance to win.'' – Patrick Reed.